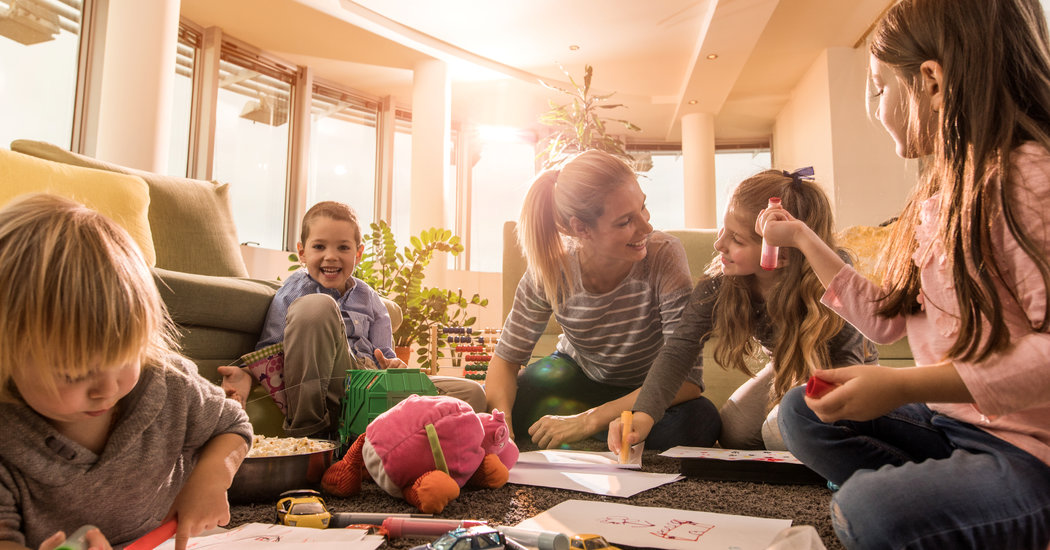 Keith Rothfritz said that when his au pair, Milenia Ataidio, asked to talk this month, she was visibly upset. The young woman had come to the United States in December as an au pair from Brazil to live with the Rothfritzes and help care for their three young sons — 2-year-old twins and a 6-month-old.

Ms. Ataidio, 21, told them that she planned to return home because of the coronavirus outbreak to be with her family, including her father who has asthma and other medical conditions. While the Rothfritzes respected her decision, they were sad to hear the news.

“You know, it’s heartbreaking because you grow attached to someone, they become part of your family, they take care of your kids,” Mr. Rothfritz, 43, said. “Our first thing is to make sure that she’s happy. We don’t want somebody to be miserable.”

Au pair programs in the United States are operated by the State Department and provide special visas for young adults, mostly women, who wish to live in a new country for at least a year and help a family with child care. For young people, these programs offer the opportunity to live in a family’s home, be immersed in a different culture and take classes. In exchange, the families that hire an au pair get in-home help and a surrogate family member for a set period of time.

In the best of times, finding live-in child care can be challenging, but right now it leaves parents facing what can seem like a set of difficult choices. The current pandemic has forced numerous countries to drastically limit travel options or shut down au pair programs altogether. With the United States’s suspension of visitor arrival programs for 60 days and all routine immigrant and nonimmigrant visa services until further notice, not to mention the closure of schools and day cares, many host families are now in a bind. At a time when people are attempting to avoid contact with any people outside their homes, they need to bring in a new member of the household.

Mr. Rothfritz, who works in law enforcement and lives in Montville, N.J., said their au pair is planning to leave in early May, which does not give them a lot of time to find a “rematch,” or a replacement au pair.

“We had to start assessing what we need to do for our children, and we don’t want to have different people watching them. We want to have it stable for them,” Mr. Rothfritz said.

Mr. Rothfritz said that he and his wife have been asking candidates during interviews whether they’ve had symptoms of coronavirus. And the agencies that help match au pairs and their host families are working to ease concerns as well. “Au pairs are just as likely to be nervous about joining a new family,” said Nancy Sterling, a spokeswoman for Au Pair in America, a federally approved nonprofit organization that helps match au pairs and host families. “Our goal is to help them understand where their fears may be coming from, give them resources that can assist during this difficult time and help them make a decision that is best for them.”

Ms. Sterling said that families were still applying to the program and considering short-term solutions in case a new au pair faced a travel-related delay. The agency said it was offering support for families and au pairs through webinars, 24-hour emergency service and other resources.

“While some au pairs, mainly from Europe, have chosen to return home due to concerns from their nuclear families or just wanting to be in their home countries during the pandemic, this is not the norm,” Ms. Sterling said in an email.

With the average pay for most au pairs falling between $ 4 to $ 5 an hour, the program has been the subject of complaints about low wages and mistreatment, as reported in recent years by Politico and The Washington Post. Still, thousands of host families and international au pairs participate in the program each year through a handful of approved organizations in the United States. Au Pair in America, for example, has approximately 6,000 host families each year.

Lauren Allen and her wife from Maryland have also found themselves scrambling for child care after their 23-year-old au pair decided to head back home to Northern Italy this week because of the coronavirus outbreak. She had been helping to take care of the family’s 4-year-old daughter and 2-year-old son.

“We work in the finance and public health fields so work is particularly crazy for us both right now, even though we are working from home,” Ms. Allen, 37, said in an email interview. “So without a child care option, we will need to coordinate and flex hours.”

Ms. Allen is now searching for a new au pair who is already in the United States via agencies and online groups. She said the hunt has been especially difficult because they do not want their new au pair to have to travel by airplane or train because of the health risks, and would much prefer the person to be within driving distance.

“Finding an au pair to begin with is an intense and stressful process. It’s like online speed dating where no one speaks the same language,” Ms. Allen said. “In a rematch situation, it’s even more heightened because there are time limits on au pairs who are rematching and there are far fewer in-country au pairs who are available to choose from.”

For American au pairs who are scheduled to work abroad or are already overseas, the current pandemic has also affected their experience.

Marisa Koster, 22, knew that she wanted to go to Scandinavia after graduating from college, so she created a profile on Au Pair World. After about two weeks, she matched with a family of four in Sweden — two parents and two children under the age of 5 — and would begin her new job in May.

She booked her ticket, applied for a Swedish residency and was already picking out the clothes she would bring when it was announced this month that many countries would order their borders shut to slow the spread of coronavirus.

“It’s pretty horrible,” said Ms. Koster, who is originally from Cincinnati. “All of my graduation plans stem from being able to leave, and I don’t know if I’ll be able to yet, or if I’ll get the residence permit.”

As of now, the Swedish government, like many European countries, will only allow citizens to enter the country and people who fall under one of their exemption categories, including those who have residence permits, but it is unclear whether that will change or if Ms. Koster’s residency application will be approved.

“It’s just hard not to know your entire future,” said Ms. Koster, adding that she hopes she can go in June or July. If not, she will search for another host family or stay in the United States and try to find a job, which could be particularly challenging in the current job market.

Ms. Koster believes that au pairs should be considered as exemptions for necessary travel.

“I would think that if they’re shutting down all the schools, it would be even more helpful for us to be there,” she said.

Kyla Fountain, 21, has been working as an au pair for an American family in Songdo, South Korea, for the past eight months.

“Now that this virus has happened, we are trying to stay indoors a lot more and we’re trying to stay safe,” she said. “And it just makes it more stressful because you also can’t get away from your job.”

“I’m not able to step outside the apartment building for longer than 10 minutes,” she added.

Her au pair assignment with her host family is supposed to end in June, but her residency visa does not expire until December. She said that she was planning to continue working for her host family until her visa expires, even if that means working longer hours.

“One of my big fears coming over here was that some world emergency was going to happen, and I wouldn’t be able to get home,” she said. “But seeing how the United States is handling it versus South Korea, I feel so much safer here than the United States.”