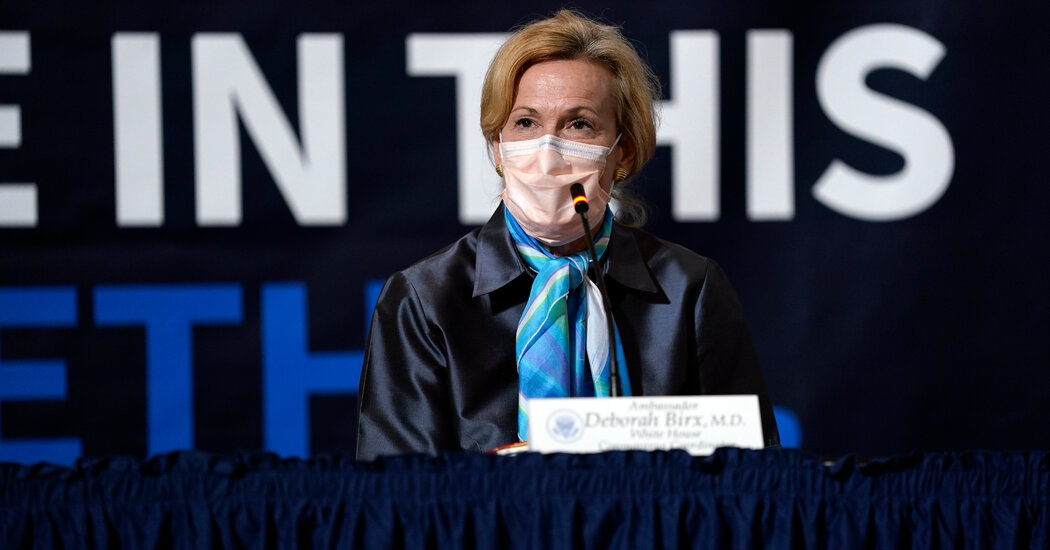 Dr. Deborah L. Birx, the Trump administration’s coronavirus coordinator, said on Sunday that the nation was in a “new phase” of the coronavirus epidemic that was much more sprawling across the country than last spring’s outbreaks in major cities like New York and Seattle.

She recommended that people living in communities where cases are surging should consider wearing a mask at home, if they live with someone who is especially vulnerable because of age or underlying medical conditions.

“What we are seeing today is different from March and April — it is extraordinarily widespread,” she said on CNN’s “State of the Union” news program. “It’s into the rural as equal urban areas. So everybody who lives in a rural area, you are not immune.”

Dr. Birx emphasized the significance of asymptomatic transmission, and said that the White House coronavirus task force was working to make sure Americans in affected communities understood this risk. “If you have an outbreak in your rural area or in your city, you need to really consider wearing a mask at home, assuming that you’re positive if you have individuals in your home with comorbidities,” like respiratory problems or diabetes.

Dr. Birx said that, in her recent travels, she had seen “all of America moving,” making it doubly important for people to understand the attendant risks, given that cases have surged in many popular holiday destinations. “If you’ve chosen to go on vacation into a hot spot, you really need to come back and assume you’re infected,” she said.

Infected people without symptoms can unwittingly seed numerous chains of infection. “By the time you wait for someone to come forward to the emergency room, you have widespread community spread,” Dr. Birx said.

Both she and Adm. Brett Giroir, an assistant secretary at the U.S. Department of Health and Human Services, emphasized the importance of prevention methods, like wide-scale mask-wearing, hand-washing, and avoiding crowded indoor spaces like bars or restaurants and mass social gatherings.

On NBC’s “Meet the Press,” Admiral Giroir said on Sunday that some of the efforts seemed to be helping in recent weeks to reduce the number of cases in Arizona, as well as in communities in Texas and Florida — all states that have been hard-hit this summer.

He repeatedly pointed to mask-wearing as perhaps the single-most effective preventive measure in communities experiencing outbreaks. “Wearing a mask is incredibly important but we have to have like 85 or 90 percent of individuals wearing a mask and avoiding crowds,” he said. “That is essentially — gives you the same outcome as a complete shutdown.”

Asked if he was recommending a national mask mandate, Admiral Giroir said, “The public health message is we’ve got to have mask-wearing.” He added: “If we don’t do that, and if we don’t limit the indoor crowded spaces, the virus will continue to run.”

Another guest on CNN on Sunday, Dr. Ashish Jha, director of the Harvard Global Health Institute, said that, in many areas where cases are surging, the availability of tests was badly lagging. “In 18, 20 states, the number of tests being done is actually falling and falling because our testing system is under such strain that we just can’t even deliver the test today that we were doing two weeks ago,” he said. “That’s very concerning because when cases are rising, and your number of tests are falling, that’s a recipe for disaster.”

Admiral Giroir defended the nation’s testing program, noting it has exponentially been increased in recent months although there are still delays in getting results. He said that both testing and contact tracing efforts were crucial responses, but not particularly helpful in large, communitywide outbreaks.

“When you have a widespread, multifocal outbreak where many people are asymptomatic, testing and tracing are of limited utility versus public health policy measures like mask-wearing, like closing indoor crowded spaces,” Admiral Giroir said. “So, yes, contact tracing is important, but it’s much less important right now than the public policy mitigation measures.”

The admiral, a pediatrician, cautioned that there was still plenty of disinformation circulating on social media. Decisions by most doctors who prescribe drugs were “evidence-based and not influenced by whatever’s on Twitter or anything else,” he said. Asked about hydroxychloroquine, an anti-malaria drug that President Trump continues to promote, Dr. Giroir was firm: “At this point in time, there’s been five randomized control, placebo-controlled trials that do not show any benefit to hydroxychloroquine. So at this point in time, we don’t recommend that as a treatment.”

He added that it was time to “move on” from hydroxychloroquine, and stressed that there are treatments showing more promise. The antiviral drug remdesivir, for example, has been shown to shorten recovery times in severely ill patients, and the steroid dexamethasone lowers the death risk among patients on ventilators. Administration officials have also been promoting the use of convalescent plasma as a potential treatment, although it is still unclear whether it will work against the virus, as well as giving billions of federal dollars to several drug companies that are pursuing vaccines on an accelerated timetable.

Still, despite encouraging signs in some states fighting to contain the recent outbreaks, Admiral Giroir said, the true cost of those infections will only be clear in the weeks to come. “We are very concerned and this is a very serious point,” he said, “and deaths will continue to increase for the next few weeks” because deaths tend to lag behind case counts.