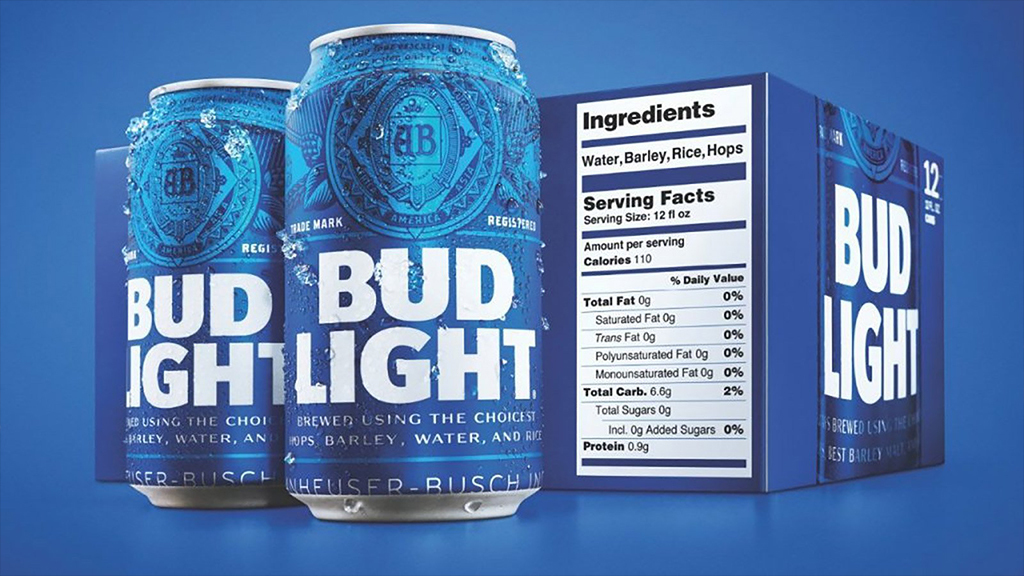 Starting next month, packages of Bud Light will have prominent labels showing the beer’s calories and ingredients as well as the amount of fat, carbohydrates and protein in a serving.

Bud Light is likely the first of many to make the move. The labels aren’t legally required, but major beer makers agreed in 2016 to voluntarily disclose nutrition facts on their products by 2020.

Ingredients should be right on the packaging. Starting in February, that’s where you’ll find them. pic.twitter.com/LfI43SDtgX

Many brands, including Corona Light, Guinness, Heineken and Coors Light, already have calories and other nutrition information on their bottles or packaging. But it’s in small type, or hidden on the bottom of the six-pack, and ingredients aren’t listed.

Bud Light went with a big, black-and-white label, similar to the ones required by the U.S. Food and Drug Administration on packaged foods. At the top, Bud Light lists its four ingredients: water, barley, rice and hops. Below that, it shows the calories in a 12-ounce bottle or can (110) and other facts. Bud Light contains 2 percent of the recommended daily amount of carbohydrates, for example.

“We want to be transparent and give people the thing they are used to seeing,” said Andy Goeler, vice president of marketing for Bud Light.

Individual bottles and cans of Bud Light won’t have the full labels, but they’ll continue to have some nutrition information printed in small type.

“They have grown up really in tune to ingredients,” he said.

But the question is: Will such labels make a difference in the choices consumers make? At least one study suggests they won’t.

John Cawley, an economics professor at Cornell and one of the authors of the study, said diners seemed to respond most to information they didn’t already know. They were probably surprised by the calories in some appetizers, for example, but already knew the general range for a glass of beer or wine.

Cawley said it’s telling that a light beer would be the most forthcoming about its ingredients and nutrition information. Bud Light’s sibling, Budweiser, has 35 more calories and four additional grams of carbohydrates, according to the brand’s web site.

Ultimately, the biggest changes may come from the manufacturers themselves, not consumers, Cawley said. Since nutrition labels were first required in the early 1990s, companies have competed to look healthier or remove objectionable ingredients like trans fats.

“That is actually the biggest public health victory of all,” Cawley said.

(Copyright 2019 The Associated Press. All rights reserved. This material may not be published, broadcast, rewritten or redistributed.)