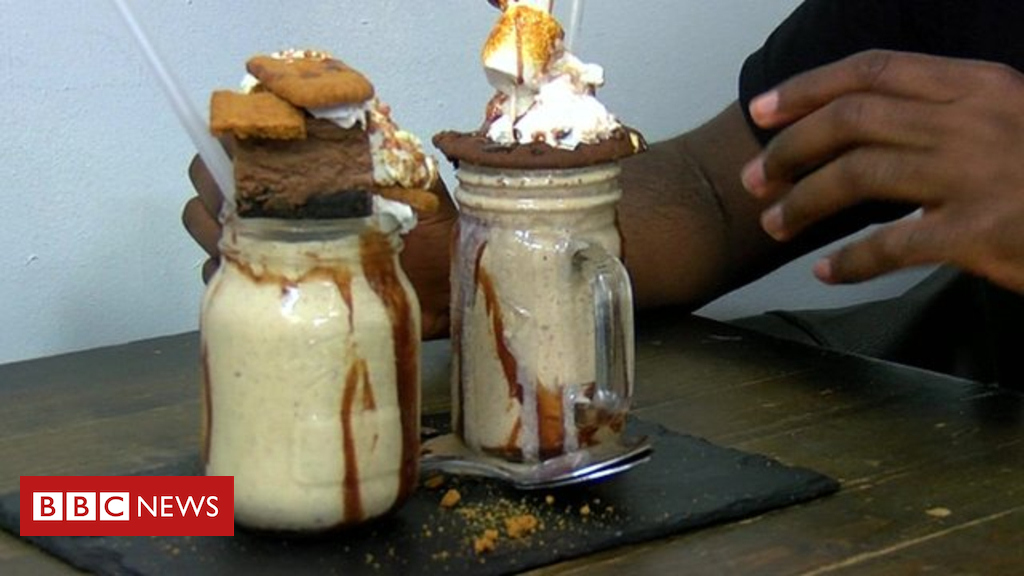 The campaign group Action on Sugar is demanding a ban on freakshakes and all milkshakes with more than 300 calories.

It surveyed milkshakes sold in restaurants and fast food shops in the UK and found they contained “grotesque levels of sugar and calories”.

The Toby Carvery Unicorn Freakshake came top of the survey with 39 teaspoons of sugar or 1,280 calories.

That is more than half the daily recommended amount of calories for an adult and over six times the amount of sugar recommended for seven to 10-year-olds.

In terms of sugar, it is the equivalent of drinking more than five cans of cola.

The British Heart Foundation calculates an average 25-year-old would need to jog for nearly three hours or vacuum the house for five hours to burn off the calories.

The researchers found that many other shakes contain more than half the daily recommended amount of calories for an adult.

They say that of the 46 products included in the survey with nutrition labelling available online, all would receive a red/high label for excessive levels of sugar per serving.

Action on Sugar, which is made up of specialists concerned with sugar and its effects on health, are calling for mandatory traffic light-coloured nutrition labelling across all menus.

The government is currently consulting on menu calorie labelling.

Public Health England (PHE) also has a sugar reduction programme as part of the government’s childhood obesity plan. It is challenging businesses to cut sugar by 20% by 2020 and milkshakes are included in that.

“These very high calorie drinks, if consumed on a daily basis, would result in children becoming obese and suffering from tooth decay – that is not acceptable,” he said.

“These high calorie milkshakes need to be reduced immediately below 300kcal per serving.”

Registered nutritionist Kawther Hashem, a researcher at Action on Sugar based at Queen Mary, said it was “shocking this information is hidden from the consumer, who would struggle to find it”.

She said it was “time the government introduced legislation to force companies to be more transparent about what is in their products”.

Dr Alison Tedstone, chief nutritionist at PHE, said: “The food and drink industry – including restaurants, manufacturers and retailers – has a key role in helping to tackle this, by reducing the amount of sugar we buy and consume, and we hope to see them step up to the challenge.”

Freakshakes were invented in Australia, but have become increasingly popular in the UK in recent years and with their photogenic qualities are a popular posting on social media.

Toby Carvery had two freakshakes in the top 10 of the survey, as did Harvester.

Both companies told the BBC that they shared their nutritional information online, took their nutritional responsibilities seriously, had committed to PHE’s sugar reduction programme and also were not targeting children with their shakes.

A Toby Carvery spokesperson added: “We also regularly work with our suppliers to explore ways we can reduce sugar levels in our dishes.”

And a Harvester spokesperson said: “We have also been recognised by the Soil Association Out to Lunch campaign for continuing to develop our children’s menu and offering healthier choices for young guests.”

Action on Sugar also looked at supermarket milkshakes and found that 90% of the 41 products surveyed would receive a red/high label for excessive levels of sugars.

The top three for sugars and calories were Muller Milk Frijj in chocolate, fudge brownie and cookie dough flavour.

A spokesperson for Muller said: “We know that for health conscious consumers, the choice of reduced sugar is important, without compromising on taste. That’s why we introduced a Frijj zero added sugar range.

“Milk contains naturally occurring sugars in the form of lactose but we would stress that it is also a natural and nutrient rich product, containing essential nutrients such as protein, calcium and vitamins.”