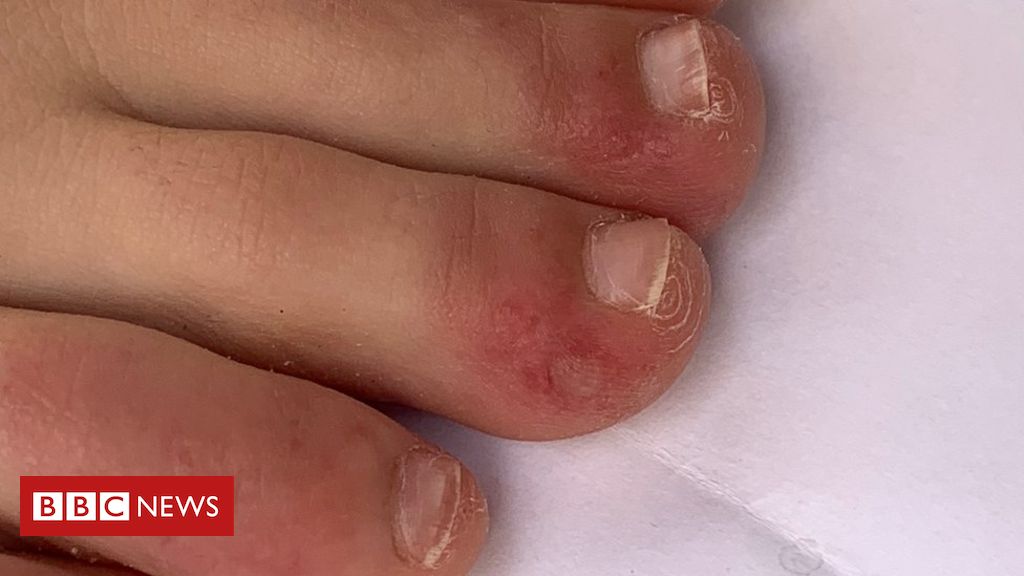 Five rashes, including Covid toe, are affecting some hospital patients diagnosed with Covid-19, a small study by Spanish doctors has found.

The rashes tended to appear in younger people and lasted several days.

It is not uncommon for a rash to be a symptom of a virus, such as the spots that indicate chicken pox.

But the researchers said they were surprised to see so many varieties of rash with Covid-19.

Rashes are not currently included in the list of symptoms of the illness.

There have been many reports about “Covid toe” – a rash appearing on Covid patients’ feet even in the absence of other symptoms – but lead researcher Dr Ignacio Garcia-Doval said the most common form of rash in the study was maculopapules – small, flat and raised red bumps that tend to appear on the torso.

“It is strange to see several different rashes – and some of them are quite specific,” Dr Garcia-Doval told the BBC.

“It usually appears later on, after the respiratory manifestation of the disease – so it’s not good for diagnosing patients,” he added.

All the patients in the study were already in hospital and had respiratory symptoms.

The peer-reviewed paper was published this week in the British Journal of Dermatology.

All dermatologists in Spain were asked to share details of Covid patients they had seen who had developed rashes in the previous two weeks. There were 375 in total.

The five rashes were:

However, the researchers stressed that rashes can have many causes, and it can be difficult to differentiate between them without medical expertise.

“The relevance of this study is not so much in helping people self-diagnose, but rather to help build our wider understanding of how the infection can affect people,” said Dr Ruth Murphy, president of the British Association of Dermatologists.

Dr Michael Head at the University of Southampton said that rashes were a well-known side effect of many viral infections, including pneumonia.

“With Covid-19, rashes and skin ulcers have been noted in a few per cent of hospitalised patients. We don’t yet know the extent of these links, or precisely why this inflammation occurs in some patients but not others.”

The American Academy of Determatology is also compiling a register of skin symptoms seen by its members.