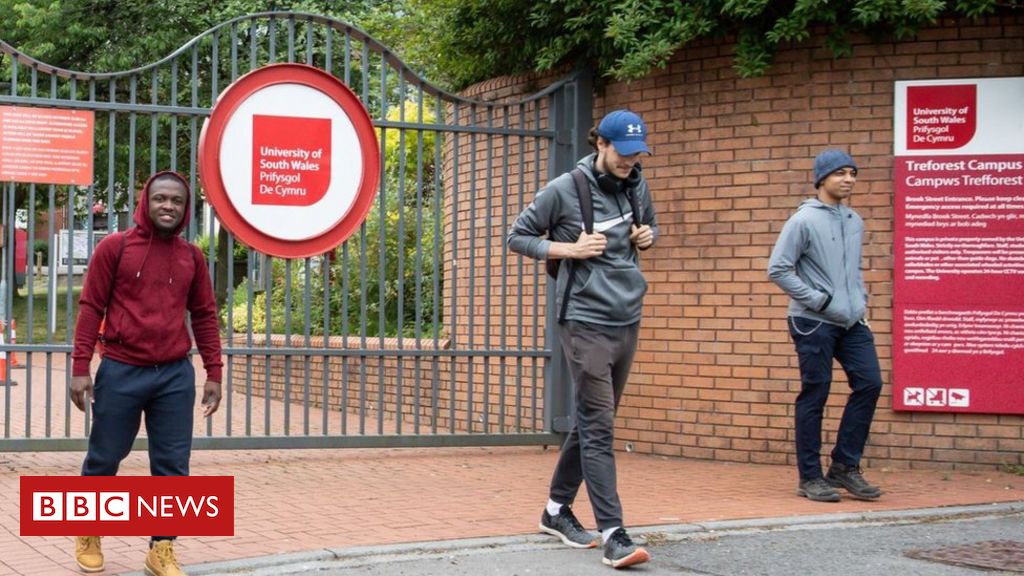 Universities in the UK are being urged to scrap plans for face-to-face teaching until Christmas in order to prevent a second wave of coronavirus.

Academics’ union UCU said more than a million students moving around the country was “a recipe for disaster”.

But university bosses say they have worked hard to plan for a safe return to all aspects of student life.

It comes as daily recorded cases of coronavirus in the UK reached 1,715 in 24 hours, the highest since early June.

Case numbers began edging up again in the UK in July, after falling in June – but are still much lower than the 5,000 new cases a day there were in April, at the peak of the epidemic.

Experts say the increase in testing over recent weeks means more people with the virus are being detected.

The UCU’s Jo Grady says having tens of thousands of students heading into cities across the UK “risks doing untold damage to people’s health and exacerbating the worst public health crisis of our lifetimes”.

She told BBC Breakfast the mass migration of a million students could prompt a “silent avalanche of infections”.

“There is far more of a risk than perhaps the general public has appreciated,” she said, adding that universities were not prepared and risked becoming the “care homes of the second wave”.

“These are all cities that have had some form of local lockdown and have come out of it or are about to go into one,” she said.

And she warned the higher number of students expected at universities this year would make social distancing harder.

What’s been the response?

Universities UK, which represents campus leaders, says many staff want to return to face-to-face teaching and research “where it is safe and appropriate to do so”.

They are mindful of the benefits of in-person teaching and support for students’ well-being and development, its president, Julia Buckingham, said.

The government says it is “confident that universities are well prepared for the return of students by taking measures such as introducing social distancing on campus, limiting travel requirement for classes and staggering teaching across extended days to reduce numbers on site”.

It said guidance is “under constant review” to reflect the latest public health advice such as 2m distancing, or 1m plus with measures such as face coverings.

Professor Jonathan Ball, a virologist at the University of Nottingham, said universities were aware students returning to campus might be “a potential flair point for coronavirus infection” and were taking that risk “seriously”.

He said universities would have their own rules and guidance, with sanctions “for students who willingly, knowingly break the rules of engagement”.

But he cited veterinary students who had already returned to Nottingham, whom he praised for their “incredibly good” behaviour and attitude.

“We have to allow these students to get the education that they have worked hard for – and to enjoy university life as much as is possible at the moment,” he told BBC News.

What are experts saying?

Prof Carl Heneghan, director of the Centre for Evidence-Based Medicine at the University of Oxford, says it is safe for students to return to universities.

He told Breakfast that “right now it is as safe as it ever has been” to go back to campuses.

But he suggested universities could put back face-to-face teaching until the end of the academic year in spring or summer 2021, when the threat from coronavirus might have reduced.

“Can we do something over the summer, can we put a summer school on?” he asked, adding: “We need to maximise that [teaching] experience.”

The language used by unions is very strong. There are plenty of infectious disease and public health experts who would not paint the threat in such extreme terms.

Whenever we hear about risks of a second wave or a sharp rise in cases we need to consider where we have come from.

The initial surge happened because the virus was spreading pretty much undetected for a period.

It was certainly more widespread than the UK and other countries realised in February and March.

By the time lockdown came there were an estimated 100,000 new infections a day in the UK.

Today we have over 1,000 confirmed infections a day, on average.

Of course some are going undetected, but it is clear the virus is currently under control.

As people circulate more – going back to work, schools and university – the likelihood is infections will rise.

But everyday life has completely transformed from what it was in February – there are many reasons why a second surge in infections like the first can, and should, be avoided.

Students preparing for the new university term can expect changes on campuses – much like those that have affected other aspects of life since March.

Strict cleaning measures, lots of hand sanitiser, one-way systems and capacity limits for places such as the library and coffee shop will be common.

Close-knit seminars and office hours with lecturers are unlikely to take place face-to-face as they did before.

At the University of Leicester, students and staff will be screened for Covid-19 from October using a new form of mass testing developed by the institution’s academics.

Vice-chancellor Prof Nishan Canagrarajah told the BBC Leicester would regularly test as many as 10,000 students and staff to monitor infections throughout the academic year, alongside NHS Test and Trace.

There will also be staggered arrival times to prevent all students returning to the city at once, he said.

Almost all institutions will be making greater use of online teaching methods for students studying non-practical subjects.

Aside from studies, Swansea University said plans to keep students safe included “bubbles” among flatmates, meaning a ban on parties or having people over to stay.

And nights out will look different, too. The University of Sheffield’s student union has implemented an ordering app and table service, making its bars less crowded.

In Manchester, a student union is building outdoor “greenhouses” for drinkers to book in advance.

Will you be starting your first year at university in September? Tell us your thoughts by emailing haveyoursay@bbc.co.uk.

Please include a contact number if you are willing to speak to a BBC journalist. You can also get in touch in the following ways:

If you are reading this page and can’t see the form you will need to visit the mobile version of the BBC website to submit your question or comment or you can email us at HaveYourSay@bbc.co.uk. Please include your name, age and location with any submission.