Life after coronavirus: COVID-19 survivors reveal how the crippling illness left them breathless, weak and with lingering coughs for weeks after recovery

Coronavirus sufferers in the UK have revealed how the crippling illness left them weak, breathless and coughing even after they had recovered.

More than 84,000 people have been officially diagnosed with the infection since Britain’s outbreak began in February – 10,612 of them have died but many more have recovered.

Getting over the virus takes more than just waiting for the infection to heal, however, and people emerging from their ordeals say it left them totally beaten.

Dani Schuchman, a 40-year-old cyclist, said he no longer has the energy to go out on his bike and can only walk around 2.5miles at a time.

Primary school teacher Brian Mephin, said in a breathless video he was ‘wiped out’ and even struggled to walk up the stairs after he was discharged from hospital.

And a Manchester man known only as Andrew admitted he has been ‘left breathless’ after recovering from the illness.

Recovering from the virus also takes a psychological toll on those who become seriously ill. Mother-of-three Karen Mannering, who is pregnant with her fourth child, said being hospitalised with COVID-19 was her ‘darkest hours’.

Doctors say it’s unclear how long it takes people to truly recover from COVID-19. The more serious someone’s illness is, the longer it takes, and those who end up in intensive care may be left with permanent damage to their lungs and liver.

Scientists think it is likely people become immune to the virus in at least the short term, meaning they won’t catch it twice, but they are not certain. 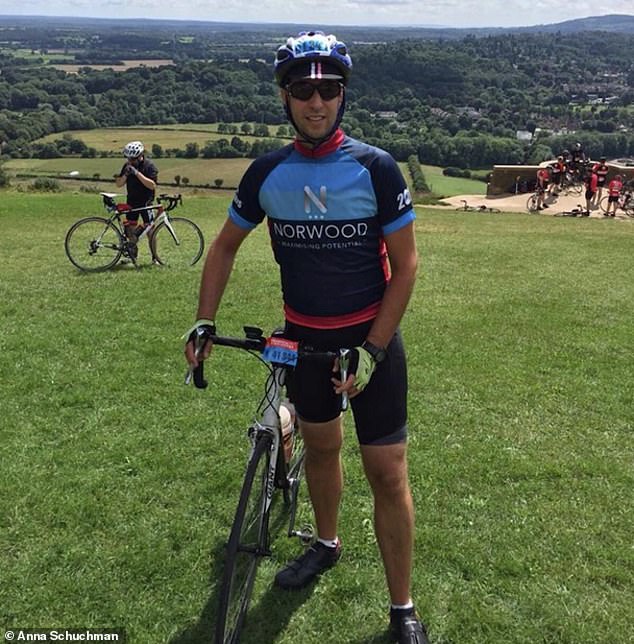 Dani Schuchman, from London, was a keen cyclist before catching coronavirus but now says he doesn’t have the energy to get out on his bike 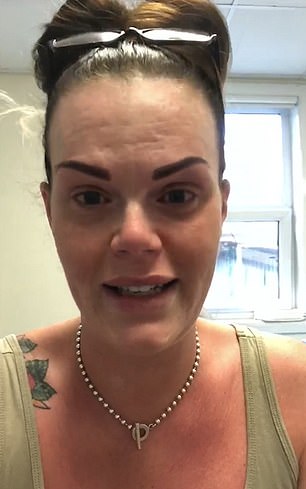 Karen Mannering, from Kent, said the time she spent in hospital with COVID-19 were her ‘darkest hours’

COVID-19 is caused by a virus which mainly attaches to and attacks cells in the lining of the airways and the lungs, which is why sufferers find it so difficult to breathe.

Read More:  The Latest: WHO warns against politics in COVID-19 response

The body’s immune reaction is what causes symptoms – swelling in the areas where the virus is attacking makes the airways close up and make it hard to breathe, and patients cough to try and expel the viruses and dead lung tissue from their bodies.

The immune system also causes a high temperature and aches and pains as it tries to make the body too hostile for it to survive.

And patients become exhausted as the virus makes the lungs unable to get enough oxygen into the blood, depleting muscles’ energy supplies.

While the vast majority of people who catch the coronavirus survive – some with medical help, but many without – the effects of it can linger on for weeks afterwards.

Dani Schuchman, 40, developed pneumonia and needed intensive care after he contracted the coronavirus in March. The fit and healthy father-of-four, from London, said the experience has destroyed his strength.

He told The Telegraph: ‘I still have some recovering to do. I can walk for about 4km [2.5miles] and can now help out with cooking, housework and homeschooling the kids.

‘For my first few days at home I would have to pause while walking up the stairs to catch my breath.

‘Now I am trying to increase my energy every day by walking and joining my family in a daily workout. I still have a slight cough but it is decreasing every day.’

Mr Schuchman, who was discharged from hospital two weeks ago, said at the lowest point of his illness he was too exhausted to even use his phone.

He added: ‘I am sad that I don’t have the energy to go out on my bike. But I hope within the coming weeks my lungs will have got stronger and I will be able to ride again.’

Another patient who needed intensive care was 39-year-old beautician Karen Mannering, from Herne Bay in Kent.

Mrs Mannering said the experience took a huge toll on her mental health and there was a point where she had ‘given up’.

In a tearful video taken after she was discharged from hospital she said: ‘I have got a long road ahead of me still, to recover, but I am coming home.’

And in a Facebook post she added: ‘I have to remember I’m one of the lucky ones who gets to come home to my family, it was too close the other way.

‘Thank you everyone who sent me get well messages in my darkest hours it really did help.’

Mrs Mannering told the BBC she went into self-isolation at home after being discharged from the hospital and still had a lingering, dry cough which she was told could last for months.

CAN YOU GET COVID-19 TWICE?

How well people recover from COVID-19 is not well understood yet.

With many viral illnesses, such as strains of flu and colds, chickenpox and measles, the body builds up immunity after it has been infected with them once, and this may last for a lifetime.

Immunity means the body remembers how to fight a virus so well that it can destroy it before symptoms begin if someone catches the bug.

Scientists are still not certain that people will develop total immunity to SARS-Cov-2, the coronavirus which causes COVID-19, after they have had it – but the overwhelming belief is that people will not catch it twice.

The fact that so few people appear to have fallen ill a second time – there have been scattered reports from China and South Korea – and that hundreds of thousands of people worldwide have recovered for good, appears to prove people only get ill once.

The virus also appears to be slow-mutating and only to have developed into a few strains since it first jumped to humans. On the flipside, the flu mutates so fast and so often that it is constantly circulating because people’s immune systems cannot keep up so every year there is a new flu that nobody has caught yet so cannot protect themselves from.

Dr Elitza Theel, a testing expert at the Mayo Clinic in Rochester, Minnesota, told MailOnline whether people develop immunity is a big unknown about the coronavirus.

Studies on monkeys, she said, suggest people will get at least short-term immunity.

She said: ‘If we think about other coronaviruses we know that we develop antibodies to those but we can still get infected. [It may be that]  there’s a certain level of protective immunity which can protect us against severe disease.’

Scientists say they still don’t know enough about the coronavirus to fully understand how people’s recovery should look.

Some people, they admit, will need medical help for longer periods than others after they recover from the initial infection.

Dr James Gill, a GP and lecturer at the University of Warwick said: ‘There are few problems in medicine where the best management plan is “take a pill now go away” and that is likely to be just as true with COVID-19.

‘The medical community currently has limited information regarding the best route to recovery for post coronavirus infection patients.

‘But it is highly likely after a hospital admission that an integrated care pathway will be required, looking at the patient as a whole person, not just a biological organism that experienced a respiratory problem.’

Read More:  What is the Science of Meditation?

The most seriously ill patients who need ventilators may be left with permanent lung damage because of the way the life-support machines force air into their airways.

Dr Gill said that after the SARS outbreak in East Asia in 2002/2003, people showed mental and physical health problems even a year after recovering.

He added: ‘One year after recovery, two thirds of patients had some evidence of mental health impact, including depression, anxiety and post-traumatic stress.

‘From this we can extrapolate that patients recovering from COVID-19 should be advised to actively engage with mental health services, whether directly or via home-based approaches.

‘From the physical side of things, again looking at SARS cases, 27.8 per cent of patients demonstrated persistent changes on chest X-rays 12 months after their recovery.

‘Whilst post-infection lung function was within normal range for those patients, they also demonstrated reduced exercise tolerances.’

Primary school teacher Brian Mephin said his ordeal with COVID-19 ‘took me and threw me to the floor’ and that he thought he might never see his family again.

He revealed in a breathless video that the illness had left him struggling to even walk up the stairs in his home and meant he was too weak to play with his children.

He said: ‘I’m a fit man, I play football on a Monday, I love life and it nearly took me… When I got home I wanted to play in the garden with my sons, my beautiful sons Leo and Frankie, and my son, Jack, who’s older but even walking up the stairs…’ 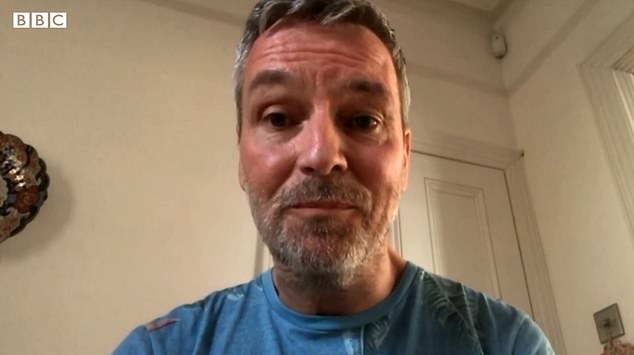 Brian Mephin, a primary school teacher, said in a breathless video that coronavirus left him struggling to even walk up the stairs and unable to play with his children 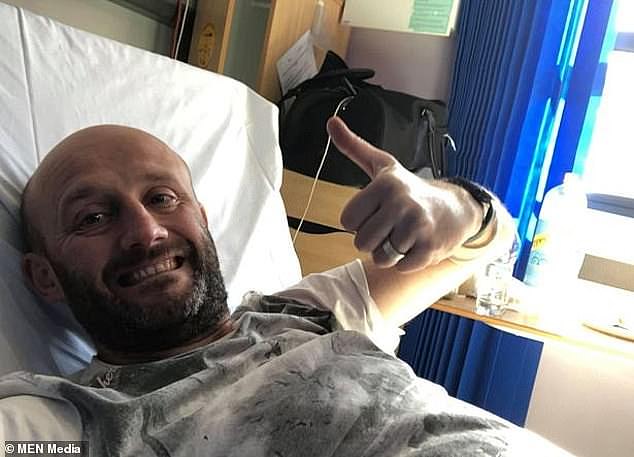 Andrew, a father-of-four, said having coronavirus was ‘the worst week of my life’ and he had been ‘left breathless from the lung inflammation it caused’

A father-of-four, from Manchester, known only as Andrew, revealed that he, too, felt weak and unfit after contracting the virus, the Manchester Evening News reported.

In a Facebook post he described the experience as ‘the worst week of my life’ but he had had a ‘good outcome’ thanks to NHS staff.

He wrote: ‘I’m back home now free from the virus but left breathless from the lung inflammation it caused. This takes time to settle.’