Workers compensation boards across Canada have received thousands of claims from employees who say they contracted COVID-19 on the job, underscoring how the pandemic has become a new workplace hazard for many Canadians.

The flood of unconventional requests is prompting calls to expand the legal definition of occupational disease, which typically includes work-related cancers, asbestosis and the like.

Statistics from some of the provinces hardest hit by the virus also highlight which job categories have felt the brunt of COVID-19’s impact.

Nurses, orderlies and other health-care workers — especially those at long-term care homes — have filed the largest number of claims, followed by municipal workers, agricultural labourers and firefighters. 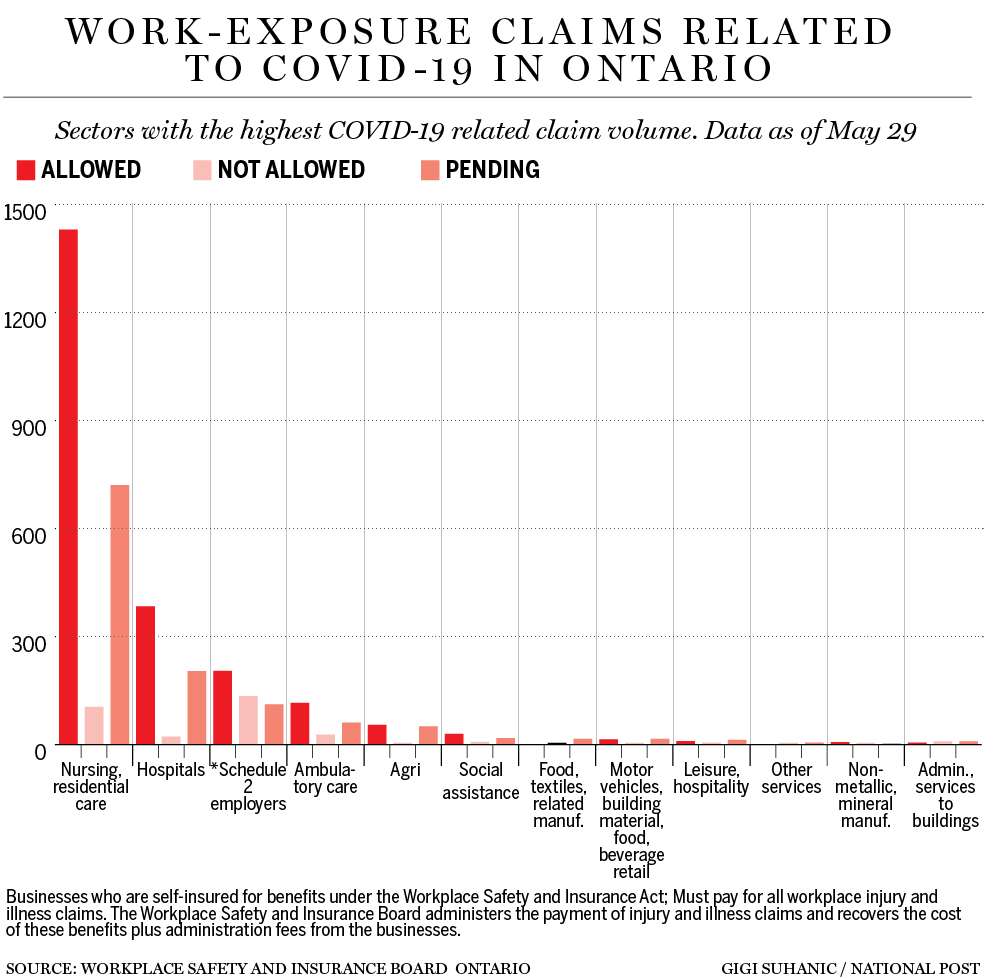 The usual volume of claims at Ontario’s Workers Safety and Insurance Board has “decreased significantly” because of the economic shutdown, said spokeswoman Christine Arnott. In the meantime, COVID-19 requests have accounted for as much as 30 per cent of the volume in recent weeks.

“A dedicated team of decision-makers and nurse consultants is working through these claims as quickly as possible,” she said.

The majority of applications for aid in the four biggest provinces have been approved by the respective compensation boards.

But there’s disagreement over how liberally aid should be meted out.

British Columbia has proposed approving the claims of any worker in a high-risk field who has a virus like COVID-19, no further questions asked. It’s what’s called a presumptive test.

For now, though, all provinces are investigating each case to ensure the infection was job-related. Many claims have been rejected, though usually because the person tested negative for the virus.

“This is really not acceptable, because you’re putting people’s stress level to an even higher level,” said Hassan Yussuff, president of the Canadian Labour Congress. “We know there are certain professions right now that are far more likely to interact with people that are carriers of the virus.”

Receiving workers compensation is preferable to going on Employment Insurance because it generally pays out more for lost time, covers the cost of rehabilitation if needed and documents the illness in case it has long-term effects, Yussuff noted.

But for now, boards are handcuffed by their governing laws, which generally don’t contemplate a viral threat of the sort that has swept across the world this year.

Some illnesses are defined in legislation as occupational diseases and are subject to the presumptive test, meaning people in designated jobs don’t have to prove they got sick at work.

Adding to the presumptive list an infectious disease that affects the general public and workers at the same time would be a novel development.

The board of directors of WorkSafeBC — that province’s compensation agency — has promised to do just that within six months. It would mean creating “a formal institutional memory for diseases such as COVID-19” so evidence of “work-relatedness” would not be required in every case, says a white paper issued by the organization.

Read More:  When Will the Novel Coronavirus Pandemic Be Over?

It proposes including any viral pathogen that leads to the province declaring a health or other emergency, noting the new coronavirus may not be an issue by the time the legislation is amended.

The white paper says evidence is unclear about which occupations are most at risk, but claims statistics seem to indicate clear trends.

Receiving workers compensation is preferable to going on Employment Insurance

Ontario’s Workplace Safety and Insurance Board breaks down its numbers by sector, with nursing and residential-care homes generating by far the most claims — over 2,200 as of May 29. The province’s long-term care facilities have been decimated by COVID-19, which is blamed in the deaths of about 1,600 residents and seven staff.

Hospital workers submitted the next largest number of compensation claims, at 812, followed by a group that includes employees of transit agencies and other municipal departments. Agriculture is fifth on the list.

The vast majority of Quebec’s claims came from health-care and social-assistance workers, says Audréane Lafreniére of the Standards, Fairness and Occupational Health and Safety Commission.