Many times through the years, HealthNewsReview.org has criticized the National Press Foundation in Washington, DC, for accepting drug company funding for journalism training.  (See articles from June 2009, July 2009, August 2010, September 2010, October 2010, March 2014, March 2015, December 2015, November 2019. I may have missed a few, but you get the picture.) 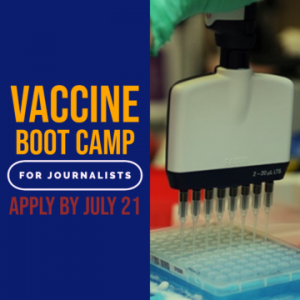 They’re doing it again this month –  in the midst of the vaccine development race – with what they call Vaccine Boot Camp – this time sponsored by drug company GlaxoSmithKline. Of course, cross-town in Washington, former Glaxo executive Moncef Slaoui heads the President’s vaccine initiative called Operation Warp Speed. Glaxo and its partner Sanofi just landed a $ 2.1 billion vaccine contract with the US federal government.  As of May, Slaoui held nearly $ 10 million in GlaxoSmithKline stock.

And Slaoui is complaining about how he’s been treated by journalists.

“I’m amazed that I’m being attacked on a personal basis in a way that frankly distracts my energy and the energy of all the teams we’re working together with to deliver, and therefore decreases our chances or the speed with which we try to help humanity and the country resolve and address this issue,” he said.

Slaoui said he is convinced the press has only one objective, which is “to distort information in a way that allows them to shape an opinion.”

One way for Glaxo to try to shape opinions is by trying to influence journalists, and the National Press Foundation is opening the door for that. We’ve heard all the arguments that “NPF retains sole responsibility for programming and content.” But they’re accepting a vaccine manufacturer’s money and addressing a topic right in their product line.

Mark Crispin Miller, Professor of Media, Culture and Communication at New York University, wrote, If you’re a “journalist” now out of work (and scruples), Bill Gates’ “Vaccine Boot Camp” is for you! He cites Gates as the largest donor to the National Press Foundation, but notes that GlaxoSmithKline is sponsor of this boot camp.

Another journalism foundation, another chunk of pharma funding

The Thomson Reuters Foundation has accepted funding from the Novartis drug company to offer health reporting training for journalists in the Asia-Pacific region. 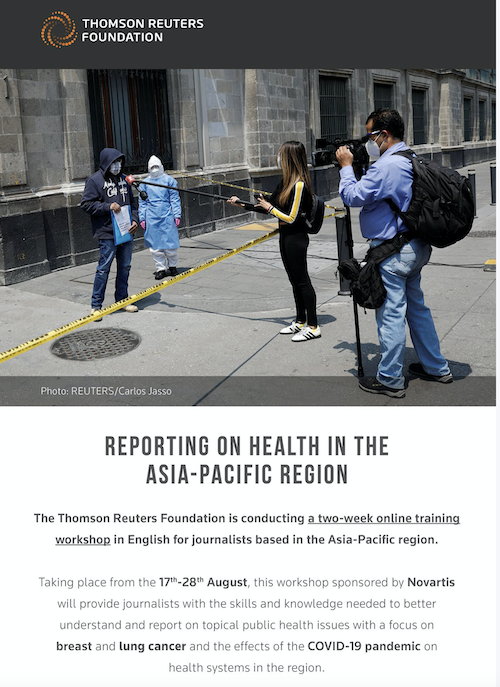 The Thomson Reuters Foundation is committed to fostering the highest standards of journalism worldwide. We believe accurate, impartial and independent journalism leads to better-informed societies.

It’s fair to wonder why the corporate foundation for a global news and information company needs to accept pharma funding in order to offer such training – and whether/how that fits “the highest standards of journalism.” 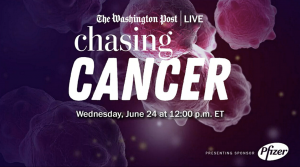 This summer, The Washington Post Live – the newspaper’s “live journalism platform” – posted more than 2 hours of video interviews on the topic of “Chasing Cancer.” (Part one here; part two here.)

It was all sponsored by Pfizer, which is active in the cancer drug market. At least 15 minutes of online video that included interviews with Pfizer executives was produced and paid for by Pfizer. The Washington Post stated that its newsroom was not involved in the production of this part of the “Chasing Cancer” presentation.

A Post senior writer conducted all of the other interviews in the project. That journalist introduced one of the segments – as she put it – ” in which we talk to leading oncologists about curing a disease that affects so many people around the world.” Talking about “curing” cancer in a project funded by a cancer drug company is questionable.

It’s noteworthy that over the past four years, The Washington Post has hosted multiple “Chasing Cancer” online events, with support from at least five other drug companies that are active in the cancer drug market:  Amgen, AstraZeneca, Bayer, Genentech, Takeda, and Tesaro.

I have contended for years that journalism organizations should not accept sponsorship money from health care industry entities that they report on. I posted a three-part blog series on this topic in 2017. In the final part of that series, I talked more about why this is a troubling issue for journalism – and for news consumers.

Let me be clear that I applaud much of The Washington Post’s health news coverage – especially during the COVID-19 pandemic. I subscribe to several of their daily newsletters, including “The Health 202.” But in that email newsletter this week, tucked right into the middle of the news content was advertising content from PhRMA – the Pharmaceutical Research and Manufacturers of America. This is the way it appeared: 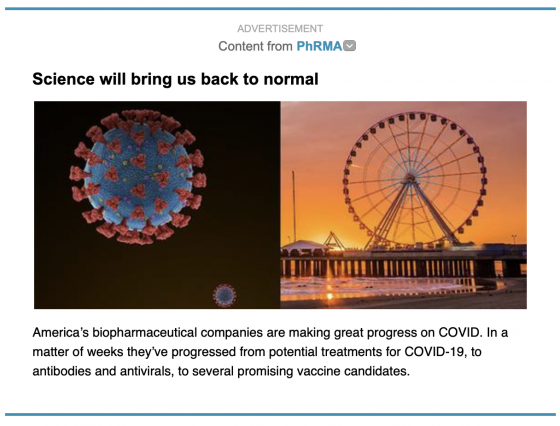 It’s not an unusual practice. I’ve written about how it’s been used by STAT, Vox and others. But that doesn’t make it any less bothersome. It’s a newsletter about health care and I don’t think that the Post should allow drug company content to appear in that space.

Tough times, but no excuses for ethical lapses

It is important to acknowledge that this is a very difficult time in the journalism industry.  Ad revenues plummeting, a mind-numbing number of layoffs, furloughs and closures, and no end in sight.

But now, when health care issues are more vital than ever, is no time to set ethics and concerns over conflicts of interest aside in favor of conflicted cash flow.  HealthNewsReview.org has tracked these concerns for a long time and will continue to do so.

Finally, I’m also a fan of the PBS NewsHour. Last week, the program offered a two-part report over two evenings about “antibiotic makers in disarray” and “how a crumbling antibiotics infrastructure could yield catastrophe.”

It is an important topic and one that deserves the time that the NewsHour gave to it.  But the time was not well spent.

By my count, they interviewed six drug/biotech company executives and entrepreneurs and two infectious disease physicians. But no one from any federal health agency – indeed, no one from the federal government – was interviewed.  There was a sentence or two about one public-private partnership. There was no discussion about the kinds of investments the government is now making in drug and vaccine development – and no questions about why some of the same couldn’t be done for antibiotic development.

It felt to me like a drug industry-dominated, “Woe is us” segment.  But there could have been some independent perspectives on what could be done to improve the situation.

It was a conflicted piece of journalism that could have been so much better. It didn’t involve industry advertising or sponsorship, so it’s different than the other topics I wrote about above. But because it came from a source that I turn to daily, and because the biases in the coverage stood out to me so clearly, it bothered me.