A Filipina beauty queen has revealed that she is need of a ‘life-saving kidney transplant’.

Miss International 2013, Bea Rose Santiago, shared in August that she was suffering from chronic kidney disease due to her intense ‘gym life’.

Dialysis has been keeping Santiago alive for the past four months, but her condition has deteriorated to such an extent that doctors told her she needs a transplant.

‘Kinda have kidney failure…Yes, I will be needing a life-saving transplant. I live because of a machine, my dialysis machine, and the doctors and nurses at Home Hemo Dialysis Center in Toronto General,’ the 28-year-old captioned an Instagram of herself with two catheters in her chest. 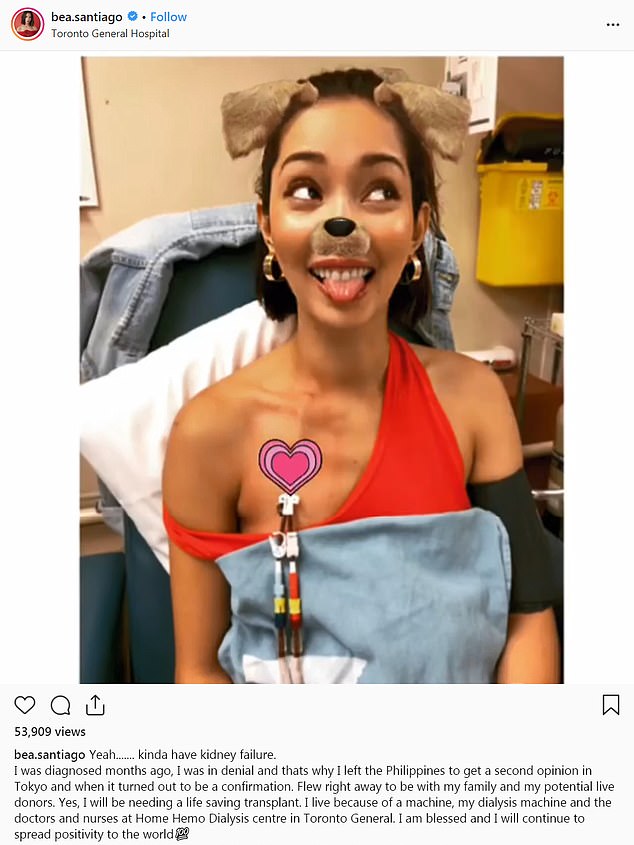 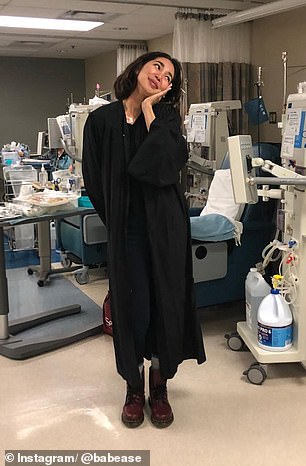 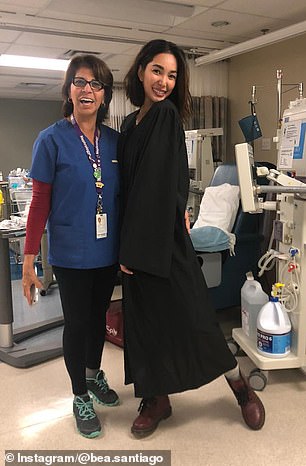 For the last three-and-a-half months, Santiago was on dialysis four times a week for five hours a day at the Home Hemodialysis Unit at Toronto General Hospital (left and right). She traveled to Canada to be with family and meet with live donors

Last year, Santiago – who beat 66 other contestants to win Miss International 2013 – began suffering from severe migraines and underwent several tests to determine the cause, reported the Philippine Canadian Inquirer.

Doctors in the Philippines said she was suffering from something ‘more dangerous’: chronic kidney disease (CKD).

The kidneys filter excess fluids and waste from your blood, which are excreted through the urine.

As CKD worsens, dangerous levels of these fluids and waste can build up in the body and cause the kidneys to gradually shut down.

The last stage of CKD is end-stage kidney failure, which is fatal without dialysis or a transplant.

According to the National Institute of Diabetes and Digestive and Kidney Diseases, 661,000 Americans are suffering from kidney failure.

Santiago said she was ‘in denial’ about her diagnosis and immediately flew to Tokyo, Japan, for a second opinion. Doctors confirmed her illness. 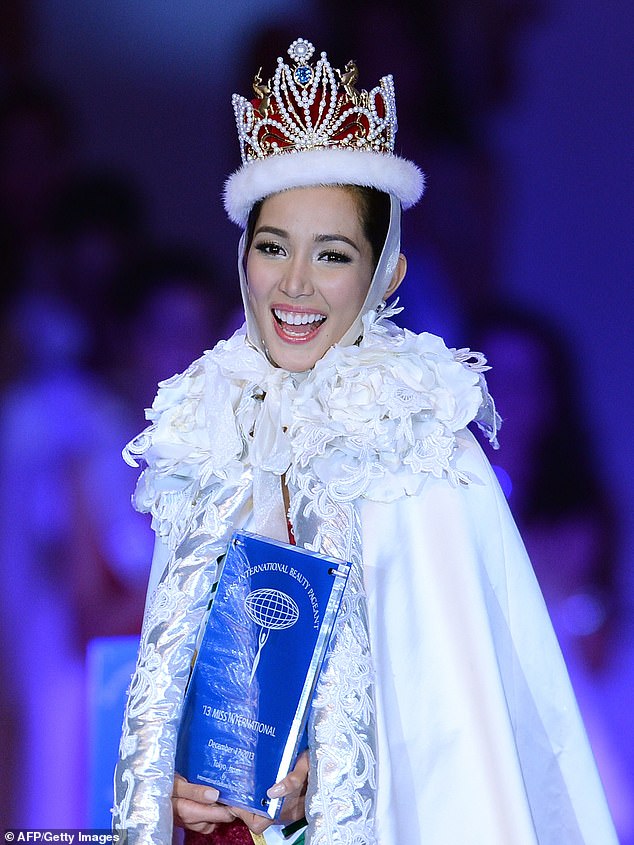 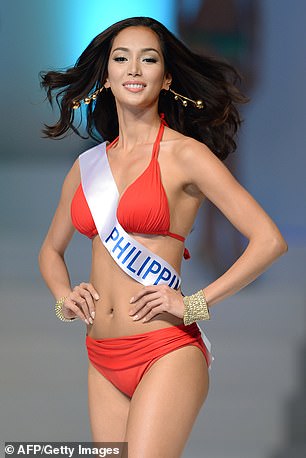 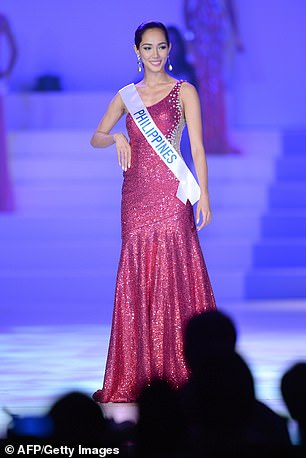 Last year, Santiago (competing in Miss International 2013, left and right) began suffering from severe migraines. Doctors in the Philippines diagnosed her with CKD in August

She then joined her family in Toronto, Canada, and to meet with ‘potential live donors’.

After her diagnosis, she told the Philippine TV show Balitanghali she suspects the pre-workout supplements she was drinking prior may have played a role.

‘I just increased the intensity of my workout and I took a little bit of help from, you know, MGA powders,’ she said, according to GMA Network.

Read More:  Robotic medicine may be the weapon the world needs to combat the coronavirus - CNBC

However, she later discovered the supplement had high levels of creatine, a compound that can significantly impair kidney function.

For the last three-and-a-half months, Santiago has been on dialysis four times a week for five hours a day at the Home Hemodialysis Unit at Toronto General Hospital.

In an Instagram post on Wednesday, she revealed the arduous two hour trip to the hospital she had to make so she could be hooked up to the machine.

‘It tested my whole being. It tested my patience, confidence in myself, my faith and my family,’ she wrote.

Santiago says that, despite the fact that her journey ‘will only get harder,’ she wants to focus on being positive. 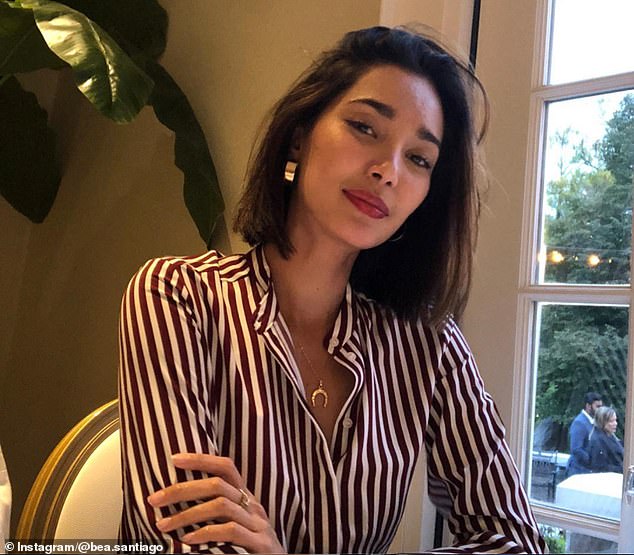 At the time of her diagnosis, Santiago (pictured) said she suspected the pre-workout supplements she was drinking may have played a role. They have high levels of creatine, a compound that can significantly impair kidney function 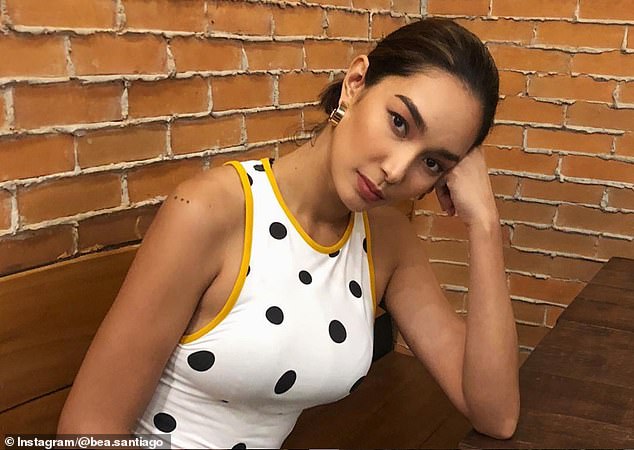 ‘God wanted me to live so He made me go to the ER for my migraines,’ Santiago wrote.

‘He gave me friends who are too loving, they can be saints, and a family and best friends that’s willing to share their organs without me forcing them.’

Santiago also urged her followers to have themselves checked and says she wants to educate other about the devastating disease.

‘I am not asking for sympathy I am asking for awareness…I am lucky and I am loved! Bad kidneys can kiss my @$ $ !’ she wrote.

Santiago, who was born in Muntinlupa, Philippines, started competing in beauty pageants in 2011, just two years before she won her Miss International crown.

Miss International began in 1960 in Long Beach, California, but it has been held in Japan since 2004.

It is one of the Big Four international beauty pageants along with Miss World, Miss Universe and Miss Earth.

WHAT IS CHRONIC KIDNEY DISEASE AND HOW CAN YOU SPOT IT?

Our kidneys filter out waste products and excess fluids from the blood before they are excreted through urine. They also help maintain blood pressure.

As CKD advances, the kidneys do not function properly and dangerous levels of waste build up in your body.

The risk of CKD increases as you age. It is also more common among Asians and blacks.

CKD does not usually cause any symptoms until it has reached an advanced stage. It can be detected early on via blood and urine tests.

Those with the condition have a greater risk of having a stroke or heart attack. It can also cause kidney failure, when sufferers will need to have dialysis or a possible transplant.

However, lifestyle changes and medication can stop the disease from getting worse if it is diagnosed at an early stage.

To reduce your risk: