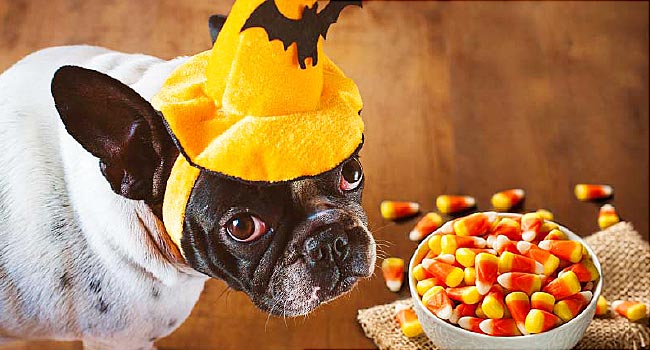 Oct. 30, 2018 — At Halloween, a sweet treat for children can play a dangerous trick on an unsuspecting pet’s digestive system.

“I’ve seen a ton of chocolate here this time of year, for sure. Adults give children candy, and they leave it out where dogs can find it,” Fowler says. “You get a line of people outside [the waiting room], with four to five dogs sitting there, potentially puking things up. And then you have to collect the puke and see what they had.”

But How Much Chocolate?

Chocolate is one of the most commonly ingested pet dangers, accounting for 7% of all cases reported to the ASPCA Animal Poison Control Center.

Fowler finds that a small or “fun-sized” amount of chocolate usually isn’t a cause for alarm. “We have a formula that compares the weight of the dog with the amount of what he ate,” he says. “Most candy bars have a decently low amount of chocolate. If a Labrador ate a mini-Snickers, it won’t do much. If a papillon or a chihuahua did, I’d be more concerned.”

Often the kind of chocolate can be as concerning as the quantity. “Darker chocolate is more dangerous than milk chocolate or white chocolate because it has higher levels of methylxanthines,” says Morieka Johnson, writer and host of the pet care blog and podcast “SoulPup: Tips & Tricks for Dog Lovers.”

A cause for worry with chocolate are mild stimulants known as methylxanthines, including theobromine and caffeine. They’re in coffee and cocoa beans as well as some medications. “Side effects [in dogs] include vomiting and diarrhea, excessive thirst, abnormal heart rhythm, seizures and [in extreme cases] even death,” Johnson says.

Halloween isn’t the only holiday when dogs can get into food that’s dangerous for them. Edible presents may be left under Christmas trees, loved ones can exchange chocolates at Valentine’s Day and Easter egg hunts often involve candy at a dog’s eye-level, with dire potential results.

“Candy and human snacks can lead to vomiting, diarrhea, dehydration, and in some circumstances pancreatitis, a serious illness which may require hospitalization,” says Leni Kaplan, veterinarian and clinician with the Community Service Practice at the Cornell University Hospital for Animals in Ithaca, NY.

Paula Emde of Atlanta dealt with the consequences of a dog eating candy many years ago when Boutros, her German shepherd mix, got into three boxes of foil-wrapped, brandy-filled dark chocolates recently brought from Germany.

“We went out for the evening and left three 24-packs on the hutch, and when we got back, all of them were gone, with shreds of paper and foil on the floor,” Emde says.

She immediately called her vet, who advised her to induce vomiting by giving Boutros a spoonful of hydrogen peroxide and then monitoring him closely.

Chocolate isn’t the only kind of candy that can be harmful to pets. “Sugar-free gum can have xylitol, an artificial sweetener. It can cause low blood sugar. The body can’t recognize it, so pumps out more insulin to get rid of it,” Fowler says.

Grapes and raisins, while considered healthy snack alternatives for humans, can be problematic for dogs. “They can cause significant kidney and red blood cell damage in dogs,” Fowler says.

Veterinarians from the Veterinary Emergency & Referral Group (VERG), a 24-hour specialty and emergency veterinary hospital group based in Brooklyn, NY, recommend pet owners keep candy in a confined, elevated location like a pantry.

Kaplan suggests that any food items that create pet dangers be kept in secure locations. “Restrict access to chocolate, coffee, caffeine, macadamia nuts, grapes, raisins and any food containing xylitol or psychoactive cannabinoids such as marijuana,” Kaplan says. “Pets must also be kept away from any beverages containing alcohol.”

In the case of Boutros, the vets considered the brandy a greater risk than the dark chocolate, even after inducing vomiting. “They were concerned that it would be a double whammy and told me that if he showed signs of being drunk, to take him to the emergency vet,” Emde says. “And after about an hour, Boutros started acting like he was drunk – he was staggering, his eyes were glassy and he was reeking of alcohol.”

Emde took Boutros to a veterinary emergency room, where he was given activated charcoal to absorb toxic substances in his belly and decrease absorption into his bloodstream. While vets often use a funnel to get the activated charcoal into a dog’s system, in this case Boutros’ indiscriminate eating habits were an advantage, as he gobbled it up mixed with canned dog food, much to the vet techs’ surprise.

Afterwards, Boutros was fine and his eating habits undeterred.

Fowler points out that the local vet isn’t your only potential resource. “For people whose animals have ingested something, the ASPCA has a pet poison hot line with toxicologists on call. [The owners] can ask them ‘Here’s the amount they ate, is this a major concern?’ and they will say ‘You’re likely looking at this potential situation, here’s the treatment we recommend.’” The number is (888) 426-4435.

Real Foods to Watch Out For

Fowler points out that items considered traditional table scraps for pets can be harmful, even if they don’t contain toxins. “At Thanksgiving, they get scrap food from the table. Things high in fat, like the uneaten bits of ham or steak, can cause upset stomach or pancreatitis, which can be severe enough that they have to be hospitalized.”

Read More:  5G is here: how health systems can capitalize on the new cellular standard

Even chewing can lead to problems that result in high vet bills. “Bones, like the center bone of ham, can fracture their teeth,” says Fowler. “Labradors come in who have been chewing on antlers and rawhides for years and can get fractures in their teeth. My rule of thumb is, if you hit something against your knee and it hurts, it’s too hard to give to a dog.”

Some dogs even gnaw on jack-o’-lanterns or uncarved pumpkins. “Pumpkin is safe for pets to eat as long as it is not moldy,” Kaplan says. If your pet eats moldy pumpkin, contact a veterinarian immediately. Pumpkin rinds are safe to chew on as long as the pet is being supervised and does not actually eat the rinds. If a pet swallows rind, Kaplan says, it could become lodged in the gastrointestinal tract which will require veterinary medical attention and surgery.

Cat owners seldom have to deal with their pets eating toxic foodstuffs, but that doesn’t mean they have no risk of emergency vet visits at the holidays. “It’s more likely that they’ll swallow foreign bodies like string, toys or tinsel from Christmas trees,” Fowler says.