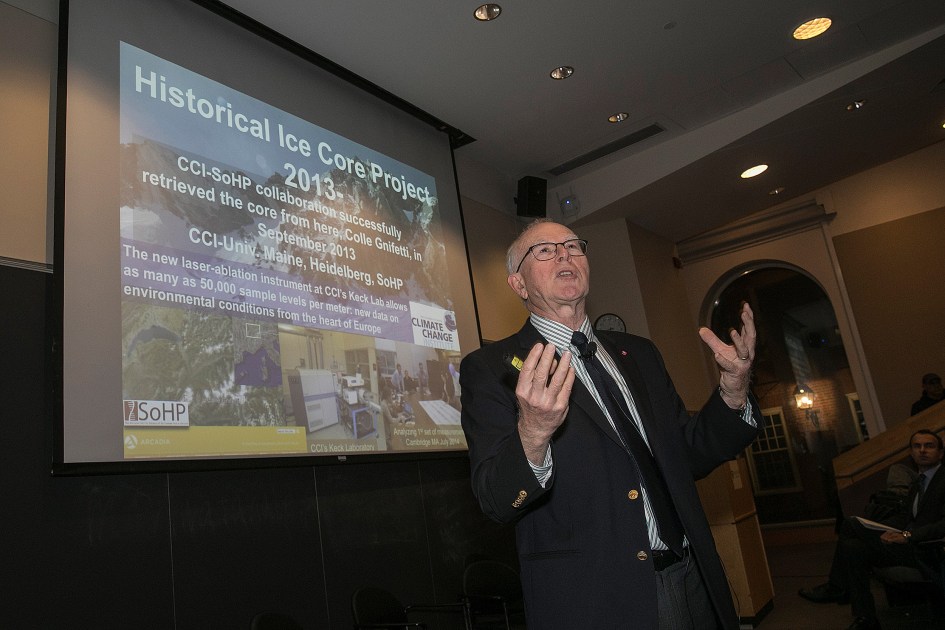 The water crisis in Flint, Mich., has been a recent focal point, but the issue of lead pollution is both global and pervasive. As Thursday evening’s “Lead Summit at Harvard: Revolutionary Discoveries in Lead Pollution and Health Impacts” made clear, man-made sources of atmospheric lead not only reach back through the centuries, but they have increasingly deadly effects on some of our most vulnerable groups.

To tackle a problem that goes beyond medicine into social and economic realms, the summit at Boylston Hall took an interdisciplinary approach. Organized by the Initiative for the Science of the Human Past at Harvard, a group devoted to bringing together scientists and humanists, the event began with a far-reaching retrospective.

Following an introduction by Michael McCormick, Francis Goelet Professor of Medieval History and chair of the initiative, Philip Landrigan, M.D. ’67, professor of biology and director of both the Global Public Health Program and the Global Observatory on Pollution and Health at the Boston College School of Public Health, looked back at humanity’s 5,000-year history with lead, from the first Mesopotamian figurines in 3500 B.C. through its industrial role as an additive in gasoline and paint.

There were early warnings about the wide-ranging effects of lead exposure. Some scientists have even speculated that the Roman Empire declined in part because of the many people who sweetened their wine with a lead-based syrup.

“Humans have been using and playing with lead for a long, long time,” said Landrigan, whose studies contributed to the policy decision years ago to remove lead from paint. “As exposure has been increasing, we’ve come to learn, repeatedly to our chagrin, that levels of lead that we thought were safe are in fact not safe.”

“As exposure has been increasing, we’ve come to learn, repeatedly to our chagrin, that levels of lead that we thought were safe are in fact not safe.”

How dangerous is lead? Bruce P. Lanphear, professor of children’s environmental health at Simon Fraser University, cited research that found lead exposure to be a major contributor to a variety of life-threatening diseases. Its role in coronary heart disease, for example, may be right up there with smoking, diabetes, and excess weight, all factors that receive much more attention.

“For too long we’ve blamed people for their lifestyle choices and failed to regulate the industries,” said Lanphear. Although the passage in 1970 of the Clean Air Act somewhat mitigated the problem of atmospheric lead, Lanphear estimates that lead exposure still leads to about 400,000 premature deaths each year in the U.S., including 185,000 heart attacks.

As part of his presentation, Lanphear announced that Ruth Etzel will receive the inaugural Herbert Needleman Scientist-Advocate Award at the annual meeting of the International Society for Children’s Health and the Environment (ISCHE) in January. ISCHE works to promote children’s health worldwide by improving the environment, and Etzel is a pediatrician and epidemiologist who, as director of the Office of Children’s Health Protection at the U.S. Environmental Protection Agency since 2015, led the effort to develop a federal strategy to eliminate childhood lead poisoning. According to The New York Times, her “analysis of blood tests in Flint played a key role in showing that residents were being poisoned by the lead.” She was placed on administrative leave in September for reasons that were not disclosed, though The Times noted that hers was “not the only E.P.A. office to have lost leadership or personnel under the Trump administration.”

Following the announcement, Amherst College Economics Professor Jessica Wolpaw Reyes, Ph.D. ’02, discussed the social costs of lead exposure, comparing the lives of the “leaded” and “unleaded.” While lead exposure hurts everyone, she said, it has the greatest impact on disadvantaged communities. She stressed that the relationship was causal, not simply correlational, pointing out on a map of Boston how specific communities have greater exposure to industries or traffic, while at the same time losing out on the mitigation afforded to higher-income areas.

The results, particularly in these already vulnerable areas, can be catastrophic. Reyes said one microgram of lead per deciliter of blood has the same effect on aggression, MCAS scores, and other social measures as $ 5,000 of family income, and an increase of 10 mcg/dl blood doubles the likelihood of teen pregnancy. All of these issues, she said, disproportionately affect the communities with the least compensatory resources.

“You are losing leaders in these communities and gaining people who will need help and will have trouble contributing and interacting with others,” she said.

The final two speakers discussed the myth of safe lead levels. After reviewing citations that referred to safe or “naturally occurring” levels of atmospheric lead, summit organizer and historian Alexander More, M.A. ’07, Ph.D. ’14, said that much of that research is funded by lead and other chemical lobbies.

Paul A. Mayewski, director of the Climate Change Institute and professor at the University of Maine, said more proof can be found in ice core samples taken from glaciers that have captured atmospheric changes over millennia. He projected graphs showing climate and atmospheric changes from the last 110,000 years taken from Greenland and the last 2,000 years from the Colle Gnifetti glacier in Switzerland that detail the severity of current climate change. These samples also implicate human beings in the presence of so-called “naturally occurring” atmospheric lead. As More noted, when human activity is severely curtailed, as it was during the 14th-century Black Death pandemic, lead levels drop precipitously. At all other times, the summit concluded, we have lived in a “leaded” society with consequences we are only beginning to understand.

Read More:  Alexa, turn me on: Why more of us are technosexuals now