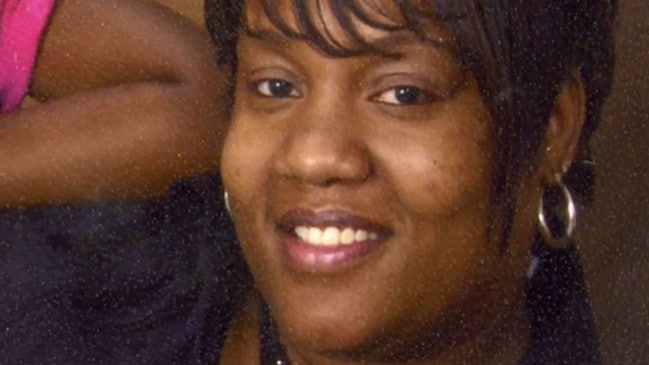 Tiffany Tate suffered a stroke and was rushed to hospital in an ambulance.

Her ambulance was turned away — then, she died.

Four years ago, Tiffany began her day like any other.

With a teenager and an eight-month old at home, she got ready for work and headed off to cover the breakfast shift at the Medical College of Wisconsin cafeteria.

Some of the other kitchen workers recalled Tate mentioning she had a headache and felt weak, but she blamed her new back pain medication and disregarded it.

Coming off her break just after 8am, Tate felt much worse. A co-worker dashed off to get her a piece of bread with honey. She returned to find Tate leaning against a counter for support. The left side of her face drooped and she was slurring her words.

RELATED: Sydney bride has strokes on honeymoon in the US

It’s estimated that every nine minutes, someone in Australia has a stroke, making it one of Australia’s biggest killers and a leading cause of disability, according to Healthdirect Australia.

Dr Jill Gamberg of Double Bay Doctors explains that stroke occurs when the blood supply to the brain is interrupted.

“Blood may stop moving through an artery because it is blocked (an ischaemic stroke) or if the artery bursts (a haemorrhagic stroke),” she told The Victor Harbor Times.

“The longer a stroke remains untreated, the greater the chance of brain damage,” she added.

The morning Tate suffered her stroke, she was at work.

Her workplace was located on the ground of the Milwaukee Regional Medical Center and 320 metres from Froedtert Hospital, one of the most advanced stroke care centres in the area.

Both were only a short ambulance ride away.

She was taken to neither.

Turns out emergency departments in hospitals throughout the United States had been quietly deploying a controversial tactic, turning would-be patients away.

Hospital officials essentially turn ambulances away from the emergency room door due to overcrowding. Sometimes this is due to an influx of patients; at other times, hospitals may not have the most efficient systems in place for moving patients through the hospital, creating bottlenecks.

Tate’s ambulance was redirected to a hospital 4km away, one that only offered limited stroke care.

In the United States, federal law requires hospital to treat patients who arrive in their emergency room and ensure they’re stable before releasing or transferring them.

But if they arrive in an ambulance that’s ordered not to come, this doesn’t apply.

Maria Raven, an emergency room doctor and professor at the University of California and San Francisco who has studied hospital diversion believes Tate should’ve been taken to Froedtert.

“To my mind, they shouldn’t be a Comprehensive Stroke Center if they can close,” Raven told USA Today. “Either you can be one or can’t be. People can’t control when they have their stroke.”

While Milwaukee County officially ended diversion in 2016, the longstanding practice continues elsewhere in Wisconsin and across America.

While ambulance diversion was first introduced in the 1980s, it’s still happening in emergency rooms across the US and UK.

In fact, weekly statistics from England’s National Health Service show that 11 hospitals turned away ambulances last week alone. According to the Daily Mail, ambulance diverts were set 38 times last week — a 500 per cent increase from just six in the same week last year.

In the US, a 2017 study also found that African-American patients were at higher risk of dying from heart attacks and strokes based on the fact that hospitals in largely minority neighbourhoods were going on diversion more often than others.

All of these factors combined collectively reduced Tate’s chances of survival.

Despite her proximity to one of the best centres for stroke treatment, Tiffany Tate’s stroke resulted in her death.

Had she been wheeled to the emergency room doors, doctors would have been obligated by law to care for her, even with diversion in place.

Instead, she was driven to Aurora West Allis Medical Center, where they could not handle the case. She was transferred to Aurora St. Luke’s Medical Center. By the time she arrived, approximately three and a half hours had passed since her stroke symptoms began.

Medical records show doctors tried (and failed) to reach the clot in Tate’s neck through an artery in her leg.

Despite their attempts to save her, Tate’s family and some medical professionals still questioned why she wasn’t treated at the hospital she was closest to.

“It didn’t make any sense to me,” her brother, David Tate, said in an interview. “Damn, she was at Froedtert. She works there. She was right there.”

While it’s impossible to know whether Tate would’ve survived had she gone straight to Froedtert, experts believe the delay in getting her to a top-level stroke centre diminished her chances of survival.