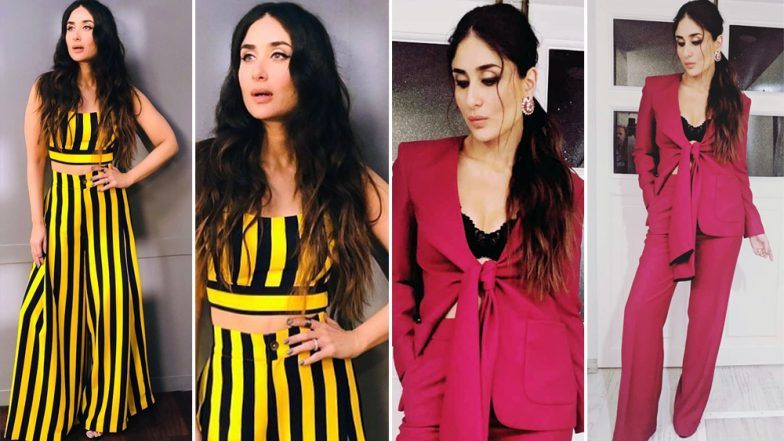 Kareena Kapoor Khan’s chic styling is often the reason why we write gush pieces about her. The Begum of Bollywood has always been so consistent with her fashion choices and there’s rarely any occasion where she fails to woo us with her style statements. From nailing her ethnic picks to slaying in her uber-cool modern wardrobe, she’s a stunner born to rule our hearts. Her impeccable fashion sense is hard to match, difficult to compete. She can pick any damn silhouette and we assure you, she will pull it off as easily as one, two, three… Kareena Kapoor Khan’s Recent Outing Proves ‘She Doesn’t Do Fashion but She’s Fashion’ – View Pics.

From recording shows for her debut as an RJ to gracing the Forbes Awards event, Bebo nailed two completely different looks within a span of few hours. From picking separates to opting for power dressing, she sizzled in two distinctly different avatars and how!

To record an episode with Soha Ali Khan for her new radio show, Kareena chose black and yellow striped separates by Two Point Two. She further completed her look with a winged eyeliner, wavy hair, nude lips and that hard to define aura around her. Karan Johar, Soha Ali Khan and Karisma Celebrate Kareena Kapoor’s Radio Debut With an Intimate Bash.

Coming to her second outing for Forbes Awards, she picked a maroon pantsuit by Osman studio and paired it with a black lacy bralette. Smoky eyes, nude lips and wavy hair tied in a chic ponytail further accentuated her uber hot #OOTD. Kareena Kapoor and 27 Dresses! Here Are All the Bridal Looks That Actress Has Flaunted Over the Years – View Pics.

If there’s anything called as ‘girl crush’, we have it on her. One of the well-dressed women in the industry, Kareena has her wardrobe sorted for all the occasions. From setting a maternity wardrobe trend to making gym fashion look so desirable, is there anything that she can’t do? Don’t scratch your brains for the answer is a big fat NO.