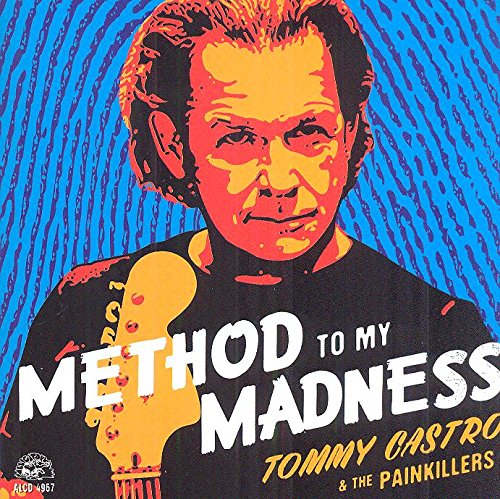 Night after night, Tommy Castro, a fierce and fiery road warrior, fervently delivers his driving, blues-soaked, soul-baring music to fans all over the world. Over the course of his four-decade career, Castro has played thousands of shows to hundreds of thousands of fans, packing dance floors, always leaving them screaming for more. He and his band, The Painkillers (currently featuring bassist Randy McDonald, keyboardist Michael Emerson and drummer Bowen Brown), play music that is guaranteed to fire up fans and with Method To My Madness, the group turns the intensity up another notch. “My main objective when making a new album,” says Castro, “is to do something different from before. I’ve always been a blues guy; it’s what I’m meant to do. But I’m always listening and reacting to what’s going on in the outside world, experimenting with my guitar tone and my songwriting approach to constantly keep my music fresh. In the end, though, my brand is on every song.” Method To My Madness finds Tommy Castro And The Painkillers at their very best. It is instantly a career-defining highlight in a lifetime full of them. From the opening one-two punch of everyman anthems Common Ground and Shine A Light to the full-tilt energy of the title track to the searing, deep soul ballad Died And Gone To Heaven, Tommy and the band are firing on all cylinders. From the bayou rock of Got A Lot and the atmospheric, autobiographical Ride to the reinvented version of the Clarence Carter hit I’m Qualified and the emotional cover of B.B. King’s Bad Luck, Tommy Castro And The Painkillers continue to break new ground while simultaneously having an incredible amount of fun. After spending his 20s gigging around in a variety of San Francisco-area blues and soul bands, Castro joined Warner Brothers’ artists The Dynatones in the late 1980s before forming The Tommy Castro Band in 1991. He released his debut album in 1996 on Blind Pig and hit the road hard, picking up new fans everywhere he went. In the mid-1990s The Tommy Castro Band served as the house band for three seasons on NBC Television’s Comedy Showcase (airing right after Saturday Night Live), bringing him in front of millions of viewers every week. During the 1990s and into the 2000s, Castro released a series of critically acclaimed CDs for Blind Pig, Telarc and 33rd Street Records, as well as one on his own Heart And Soul label. Castro joined Alligator Records in 2009, releasing Hard Believer and winning four of his six career Blues Music Awards including the coveted B.B. King Entertainer Of The Year Award (the very highest award a blues performer can receive). His song Hard Believer took first place in the blues category of the International Songwriting Competition. Castro formed The Painkillers in 2012, creating a lean, mean four-piece lineup and leaving his tight horn section behind. Fueled by Tommy’s voice and guitar plus bass, drums and keyboards, the band released The Devil You Know in 2014, winning over hordes of new fans. Castro stripped his music down to its raw essence with the band hammering their point home on the bandstand. Jambands declared, “Tommy Castro And The Painkillers are a crackling, stripped-down band with plenty of grit and a rocking soul.” Now, with Method To My Madness, Tommy Castro And The Painkillers are ready to unleash their new songs on music fans everywhere. “With the new album,” Castro says, “I was trying to get back to my basic ingredients: blues and soul. I went for the energy of connecting with my band. We kept everything raw, capturing the feeling of playing live. I’m not about being perfect,” he says, summing up. “I’m about being real.” Clearly that is the method to his madness.