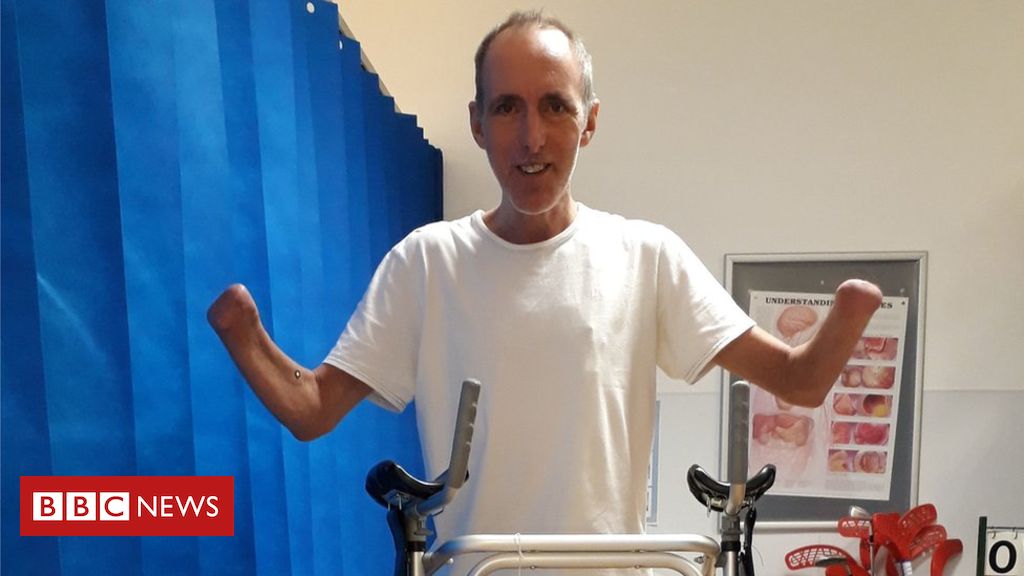 A man who almost died from meningitis has revealed how he began to look forward to having his limbs amputated.

During this time, he said he knew his hands and feet were “dead” and he would recover better without them.

Now he says he is in a positive place and “can even hold a pint of beer”.

With the help of prosthetic limbs, Mr Davies can drive a specially-adapted car and said he was living life to the full.

“My message to anyone who has amputations would be not to give up,” he said.

The illness struck on Christmas Eve in 2017 when he began to get “colder and colder”.

He said: “Climbing into bed didn’t help. I looked like a ghost with blue lips.”

His family insisted he went to Royal Sussex County Hospital.

In the early hours of Christmas Day, his wife Julie and son Rory were taken to a room and told he was unlikely to survive.

“When they held my hand, I could not feel it. My hands and feet were dying,” he said.

During 10 weeks in hospital “on the edge of survival”, he knew his limbs had to go.

“I was on a lot of medication and I was very accepting that they needed to go for me to make a recovery” he said.

He spent two and a half months at Queen Mary’s University Hospital, Roehampton, learning to walk on prosthetic legs.

Since then, he has “walked three miles”, can feed himself, using cutlery strapped to his arms, and can “even hold a pint of beer”.

“I feel in quite a positive place in my mind about the challenges I still have to overcome.

“Support from other people has been key. I am a lucky man,” he said.