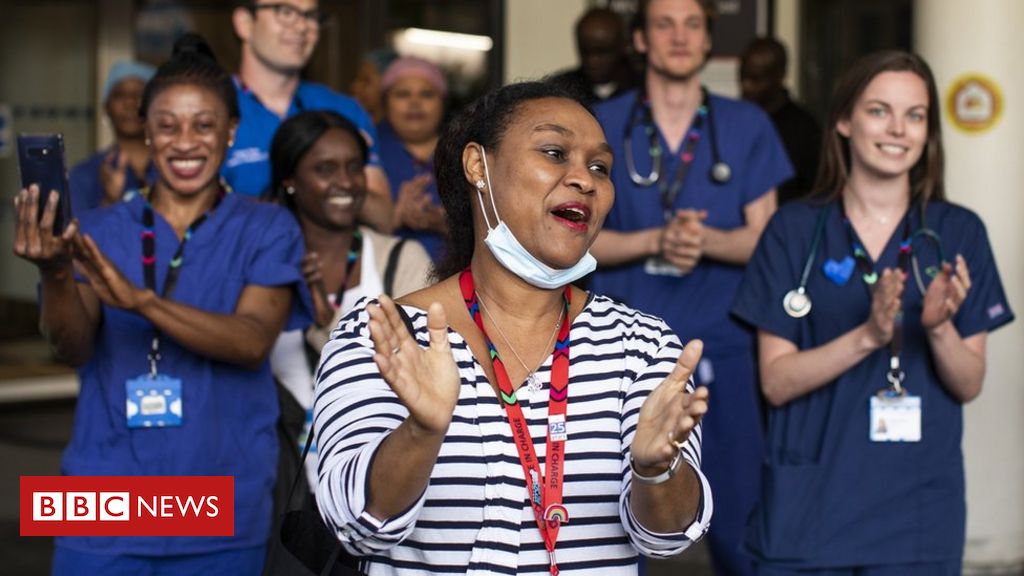 The prime minister will join a nationwide round of clapping later to pay tribute to NHS staff on the 72nd anniversary of the health service.

The public are being encouraged to give a round of applause at 17:00 BST for all those who helped save lives during the coronavirus pandemic.

In a video message, Prince Charles has spoken of his gratitude and pride for the “costly sacrifices” of NHS staff.

On Saturday, UK landmarks were lit up blue in celebration and remembrance.

Downing Street, the Royal Albert Hall, Blackpool Tower, the Shard and the Wembley Arch were all illuminated and a minute’s silence was held to remember those who have died during the pandemic.

People were also asked to place lights their windows in a show of remembrance on Saturday night, with the Archbishop of Canterbury, the Most Reverend Justin Welby, lighting a candle in Canterbury Cathedral.

Later on Sunday, a World War Two Spitfire plane with the words “Thank U NHS” painted on its underside will tip its wings above hospitals and the homes of fundraisers and volunteers, recognising the way people have supported the NHS and local communities during the pandemic.

The National Health Service was launched on 5 July 1948, with the core principle that it is free at the point of delivery and is based on clinical need.

On Sunday evening, the nation will clap to show its thanks for the service, in what is hoped will become a yearly tradition.

The idea was inspired by the success of the weekly Clap for Carers which saw households across the country show their appreciation for the NHS and other key workers during the height of the coronavirus crisis.

Annemarie Plas, who founded the Clap for Carers initiative and will be joining the PM outside No 10 at 17:00, said she thinks the NHS anniversary clap will be a “beautiful moment”.

Speaking on BBC Breakfast, she said: “We have had this first part of the crisis, we don’t know what lies ahead, so if we can have this one moment where we say thank you to each other and recharge our batteries for what may be a heavier time that lies ahead, then I think that is a beautiful moment.”

She said the NHS helped her when she arrived in the UK from the Netherlands as a new mother. “So I feel very happy to be in touch with the NHS this way.”

On Friday, Mr Johnson urged the public to applaud for “those who have worked tirelessly and selflessly to help the nation get through this pandemic”.

The moment will be broadcast on BBC One.

In a video message to mark the occasion, Prince Charles paid tribute to staff working through “the most testing time in the service’s history”.

“Despite all that has been endured, there is deep cause for gratitude, and a true reason for pride,” he said.

The prince also said the pandemic had brought out the best in people, adding: “This renewal of our community spirit has been a silver lining during this dark time.”

Speaking at a rally celebrating seven decades of the health service, Labour leader Sir Keir Starmer said NHS staff needed a pay rise in the wake of the pandemic.

“It’s very important that we don’t just say thanks, but recognise in a meaningful way what the NHS has done,” he said.

How are you marking the anniversary of the NHS? Share your experiences by emailing haveyoursay@bbc.co.uk.