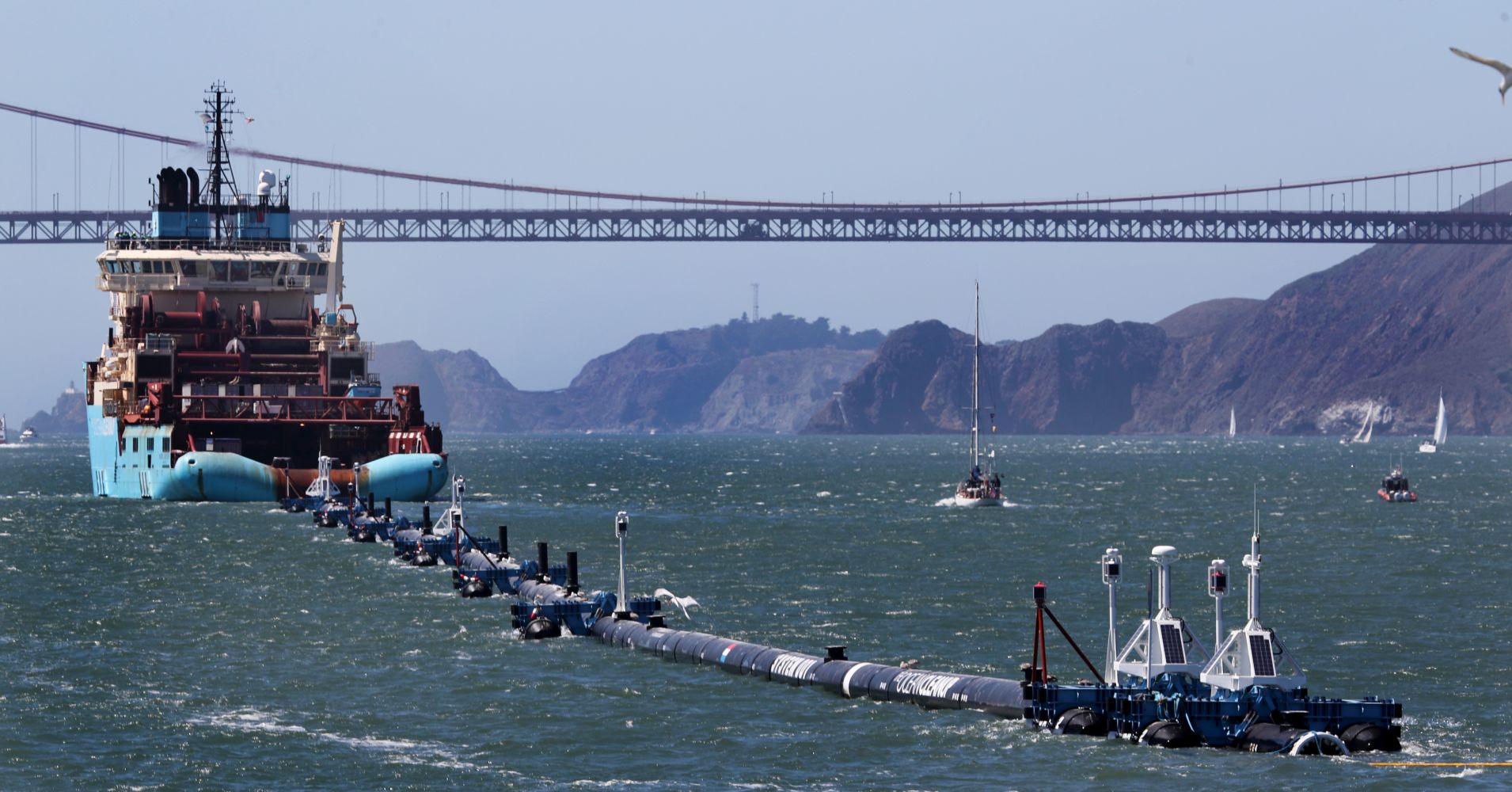 An ambitious project to clean up a vast tide of ocean pollution has been sidelined. The project’s 2,000-foot-long screen — which was already failing to capture plastic while stationed more than 1,000 miles off the coast of California — broke apart just before New Year’s under the constant wind and waves of the Pacific Ocean.

The young Dutch inventor who conceived the Ocean Cleanup project, and hopes to one day deploy 60 of the devices to skim plastic debris off the surface of the ocean, said Thursday that he would not be deterred by the setback.

Boyan Slat said in a phone interview from his office in Rotterdam, Netherlands, that the screen would be towed about 800 miles to Hawaii. Once there, it will either be repaired or loaded onto a barge to return to its home port of Alameda, California.

“Of course there is slight disappointment, because we hoped to stay out there a bit longer to do more experiments and to….solve the [plastic] retention issue,” Slat said. “But there is no talk whatsoever about discouragement.

“This is an entirely new category of machine that is out there in extremely challenging conditions,” Slat added. “We always took into account that we might have to take it back and forth a few times. So it’s really not a significant departure from the original plan.”

But a critic who has followed Slat’s project since he unveiled it more than five years ago said the failure was predictable and that systems deployed closer to shore stand a greater chance of slowing the deluge of plastics spilling into the world’s oceans.

“I certainly hope they will be able to get it to work, but this is a very difficult environment where equipment breaks, which is why you normally do things closer to shore, where things are easier to repair,” said Miriam Goldstein, director of ocean policy at the Center for American Progress, a liberal think tank.

Oceanographers and environmentalists have been concerned with plastics pollution for years, but the issue gained broader public attention in 2018, with many jurisdictions banning plastic drinking straws, eating utensils and bags. The World Economic Forum has projected that the total of plastic debris in the oceans will outweigh all the world’s fish by 2050, if plastics disposal continues unabated.

Slat first came up with his audacious plan to clean the waste from the oceans as a teenager. Now, at 24, he has raised more than $ 40 million from tech entrepreneurs and thousands of donors. He oversees a staff of more than 80 engineers, oceanographers and others.

The crew has designed a pipe-shaped plastic barrier that floats atop the ocean, with a 10-foot-tall screen of impermeable synthetic textile hanging beneath the surface. The device is designed to move with the wind and waves, fast enough that the U-shaped “array” will hold plastic — which can periodically be picked up and shipped away to recycling centers.

With an estimated cost of nearly $ 6 million per screen, a total of $ 360 million would be needed to operate 60 of the strainers for three years in the Pacific, the Ocean Cleanup project says.

But for now, Slat and his team need to get their prototype working.

The Ocean Cleanup towed “System 001” under the Golden Gate Bridge and into the Pacific just after Labor Day, first parking it about 200 miles offshore for an initial shakedown period. In October, a ship pulled the device another 800 miles into the Great Pacific Garbage Patch, a giant swirling field of plastic that covers an area about twice the size of Texas.

But four weeks after the move into the deep ocean, Slat’s team reported that the plastic that washed into the barrier was not staying in the system. The project’s engineers concluded that the device was not moving fast enough. “At the very minimum, the system needs to be continuously traveling faster than the plastic,” said an update on the project’s website.

Slat said Thursday that his team is looking for ways to move the screen more quickly by allowing it to catch more wind.

On Saturday, the problem expanded when the crew on the support boat tending the screen discovered that an 18-meter section at one end of the pipe had detached from the rest of the system. Stress from the constant movement of the pipe — an estimated 1.4 million fluctuations caused by swells and wind over four months — probably led the high-density polyethylene to snap, Slat said.

The self-educated engineer, who dropped out of college to pursue his passion project, said he believes that his team will solve the problem by redesigning the configuration of the plastic boom, rather than turning to a new material. “This is one of the classic structural engineering challenges,” Slat said. “You saw it first with the railroads, then with airlines and now with this first cleanup system. It’s very hard to predict. It’s very hard to model. So this is all very educational.”

Slat said that the fixes would take months, declining to be more precise.

Goldstein wrote her Ph.D. dissertation in oceanography on the Pacific Garbage Patch. Her words before Slat launched his prototype in the Pacific now sound prescient. “The ocean is strong and powerful,” she told USA Today last summer, “and likes to rip things up.”

Besides warning that the ungainly device might not survive in the Pacific, Goldstein expressed concern in an interview this week about it trapping sea creatures, particularly jellyfish and slugs that she said would not be able to pass around or underneath the screen.

She also said that it is important that the limited resources for plastics cleanups be focused on the most effective solutions. She pointed to the solar-driven water wheels that have removed an estimated 1,000 tons of plastic pollution from Baltimore’s harbor since 2014.

“A great deal of money is being spent on this Ocean Cleanup device,” Goldstein said, “when there are various other methods that remove a lot more plastic, for a lot less money.”