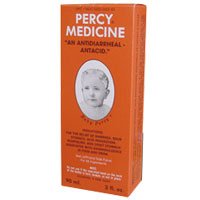 STOMACH PROBLEMS SOLVED WITH PERCY MEDICINE FOR DIARRHEA AND OVERINDULGENCE IN FOOD AND DRINK Percy Medicine – is used to treat stomach upsets, especially with kids (for children under 12 please consult your doctor). Always read packaging labels fully. Percy Medicine is specially formulated to relieve diarrhea, for the relief of upset stomach associated with nausea, heartburn, fullness, belching and gas due to overindulgence in food and drink. Helps firm stool. Reduces the number of bowel movements. In 1898, young Albert Percy was traveling with his family from New York to his new home in Waco, Texas. Along the way, he developed an upset stomach. The family stopped in Kentucky where his father found a doctor who offered a liquid remedy. Soon, Baby Percy was feeling much better. After arriving in Waco, Albert’s father asked a pharmacist to prepare the Kentucky recipe to help the baby with another bout of stomach upset. The results were so good that druggist W. S. Merrick asked Albert’s father to join him in producing Baby Percy Medicine. The company was officially born on January 1, 1904. It continues making the elixir to this day. Percy Medicine (re-named in 1938) is the only product produced at the factory at 8th and Webster in Waco, Texas. It is mixed and bottled by hand and contains a secret formula of bismuth Subsalicylate, alcohol, calcium hydroxide, potassium carbonate as well as rhubarb extract, sugar, cinnamon and orange flavoring. La medicina Percy es especial para el tratamiento de chiquilines, ninos cuando tienen problemas con el estomago.