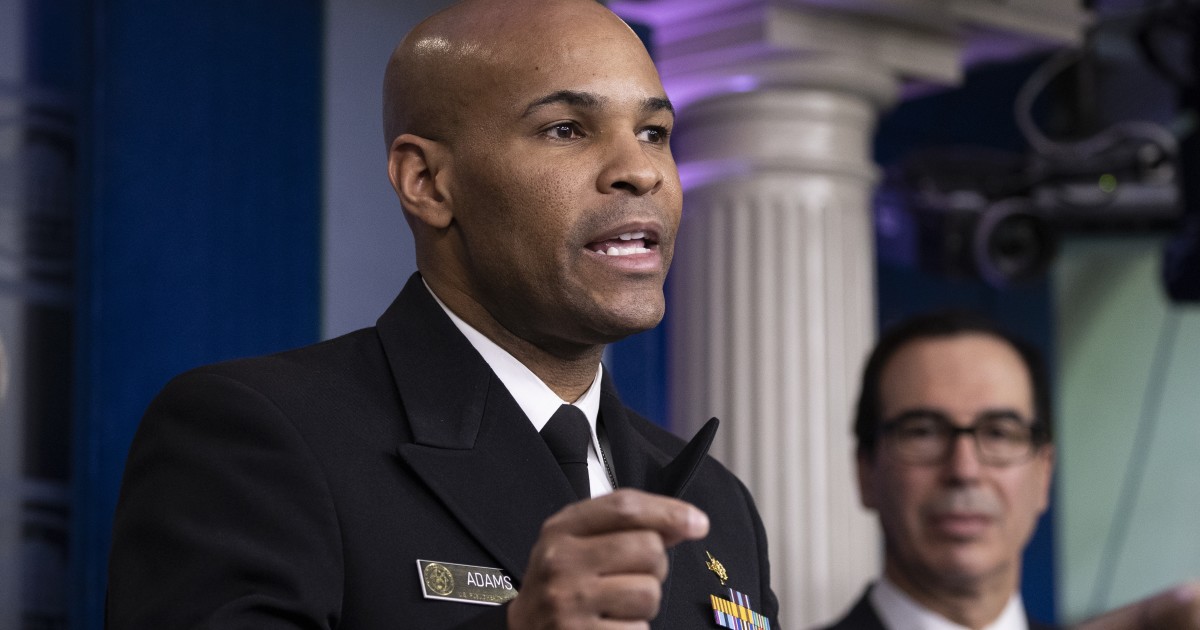 Surgeon General Jerome Adams stressed the importance of “social distancing” in the battle against the spread of COVID-19 in the United States.

At the White House Coronavirus Task Force briefing at the White House on Saturday, Adams explained how the tactic could help prevent the most at-risk groups, older people and those with underlying conditions, from catching the disease.

Adams, an anesthesiologist and a vice admiral in the U.S. Public Health Service Commissioned Corps, said the novel coronavirus, which originated in China in late 2019, did not pose much of a threat to the young and healthy. But he stressed that it was important that these less vulnerable people do what they could to avoid catching the coronavirus because they could pass the highly-contagious infection along to the already-ill or the the elderly, to whom the disease has proven much more dangerous, especially since no vaccine currently exists for COVID-19.

“We must lean in to protecting the most vulnerable — those with chronic or severe medical conditions, especially seniors,” Adams said. “Now is the time to lean into that.”

The surgeon general stressed that the Health and Human Services Department and the Centers for Disease Control and Prevention “are taking measures to protect” those vulnerable groups and “are hard at work right now leaning into that from the federal level, but we need your help.”

Dr. Deborah Birx, the White House Coronavirus Response Coordinator, added that “until you really understand how many people are asymptomatic and asymptomatically passing the virus on, we think it’s better for the entire American public to know that the risk of serious illness may be low, but they could be potentially spreading the virus to others.”

The physician said “that’s why we’re asking every American to take personal responsibility to prevent that spread” and “we need to have everybody taking precautions.”

Adams elaborated on this further during a joint news conference with Louisiana’s governor on Thursday.

In Italy, there have been 21,157 confirmed coronavirus cases and 1,441 confirmed deaths as a result of the disease, as compared to South Korea, where there have been 8,086 confirmed cases yet a significantly lower 72 deaths, according to Johns Hopkins University.

Italy is currently on a nationwide lockdown to mitigate further spread.

Johns Hopkins University’s tracker shows there have been 2,726 cases in the U.S. with at least 54 confirmed deaths as of Saturday night.

The surgeon said “interestingly enough, young adults and children, if they get the coronavirus, their mortality rate is lower than if they got the flu … and so a lot of our attention is really focused on protecting those who are most vulnerable and those who are most at risk.”

The American Enterprise Institute’s COVID-19 Test Capacity tracker estimates the U.S. has a current testing capacity of 26,860 tests per day.

On Wednesday, the World Health Organization declared the virus a pandemic. WHO Director-General Tedros Adhanom Ghebreyesus said Friday that “Europe has now become the epicenter of the pandemic.”

Adams, along with the CDC’s chief, Dr. Robert Redfeld, said “Europe is the new China.”

Trump placed travel restrictions on much of Europe earlier in the week, and added the U.K. and Ireland to the list on Saturday, after placing restrictions on China in January and Iran in February. He declared a national emergency on Friday.

Sean Conley, the physician to the president, said on Saturday that Trump tested negative for COVID-19.

The coronavirus is believed to have originated in the city of Wuhan, the capital of China’s Hubei province. China, Russia, and Iran have been spreading disinformation about it.

Public gatherings and sporting events across the U.S. have been canceled in response to the spread of the virus, hundreds of schools have been shut down, and the U.S. Capitol complex was closed to the general public. The stock market seesawed between dramatic losses and gains this week amid concerns about the coronavirus’s effect on the global economy.