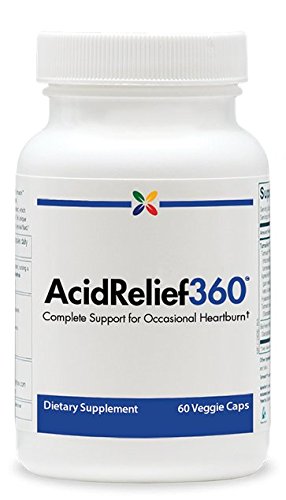 AcidRelief360 is a doctor developed formula that features a powerful synergistic blend of ingredients to help support digestive health and relieve occasional heartburn and acid indigestion. This unique formula includes 200 mg of Slippery Elm Bark, an herb famous for its soothing properties. As the name implies, extracts of slippery elm are often slippery due to the high content of plant polysaccharides, which can help to heal irritated internal tissue along the gastrointestinal tract. Also included is 75 mg of GutGard deglycyrrhizinated licorice (DGL) to help to restore the integrity of the esophageal, stomach and intestinal lining by increasing the secretion of protective mucus. Research suggests this can help with functional dyspepsia (mild discomfort in the upper belly or abdomen occurring during or right after eating). AcidRelief360 also includes 50 mg of ACTIValoe aloe vera, which is rich in polysaccharides and similar in nature to the makeup of the mucus in your stomach that protects it from stomach acid. It has been ranked as one of the top digestive products for years. ACTIValoe is made using a patented process that provides more polysaccharides to help soothe the digestive tract. There’s also 50 mg of lemon balm, used as far back as the Middle Ages to ease tension and the discomfort of indigestion including gas, nausea and bloating. In addition, lemon balm has the ability to relax smooth muscle, which means that it can help to relieve spasms of the digestive tract. And finally 150 mg of German chamomile, used as a natural digestive soother and mild herbal sedative for thousands of years dating back to the ancient Egyptians, Romans and Greeks has been added to this unique formula. The flowers of the chamomile plant contain compounds called mucilages, which have a soothing effect on the lining of the esophagus and other mucus membranes.