NHS Test and Trace was hit by ‘huge IT problems’ in October that led to delays in squashing coronavirus outbreaks in care homes, according to leaked emails.

NHS staff revealed an IT failure occurred in mid-October at a crucial point of the second wave of the pandemic, when infections were rising all over England.

It caused problems in the software used by contact tracers who phone people who have been in close proximity to a Covid-19 case.

Sources told The Guardian it led to delays of up to 48 hours in reaching potentially infected people linked to care homes and hospitals, home to the most vulnerable people to Covid-19, in some of England’s Covid-19 hotspots.

Data shows performance dropped to record lows in that week, with only 43.6 per cent of close contacts reached. Scientists have said 80 per cent must be reached in 24 hours to halt the spread of the coronavirus.

But data today offered a ray of hope that the system may finally be getting better, with the number of infected patients reached at a record high.

Tracers reached 85 per cent of the 141,800 people who tested positive for Covid-19 in the week ending November 4. This is the best performance yet — but still means 20,000 infected patients, and all of their contacts, slipped through the net.

It is a rise of 0.9 per cent on the previous week, when 84.1 per cent of positive cases were told to self-isolate and asked for details of their close contacts. 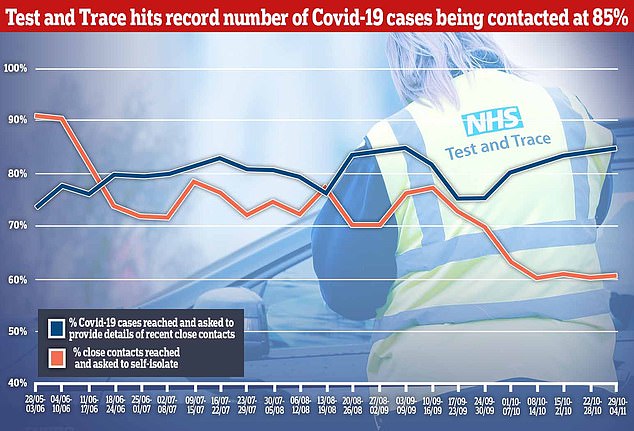 Tracers reached 85 per cent of the 141,800 people who tested positive for Covid-19 in the week ending November 4. This is the best performance yet — but still means 20,000 infected patients, and all of their contacts, slipped through the net 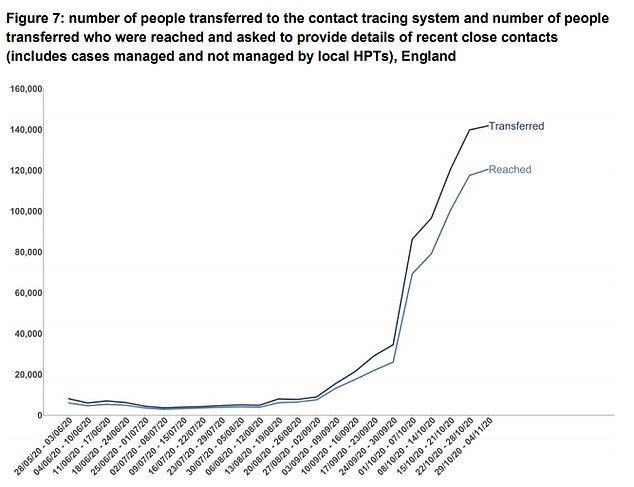 The number of Covid-19 cases transferred to the contact tracing system and the number of those that were reached is shown above. They have reached a record high

The Prime Minister’s spokesman cautiously welcomed the figures today, saying they are ‘getting better’ and beginning to show an ‘improvement’.

Test and Trace — which Boris Johnson promised would be ‘world-beating’ — has fallen short of its targets for weeks. It has been struggling to get through to many Covid-19 patients and their contacts since infections began to surge again in late September.

Its boss and former TalkTalk executive Baroness Dido Harding has been forced to bat off mounting calls for her to resign, which experts said led to the UK’s outbreak to get so out of control in the first place.

The latest event in a string of failures suggests technical glitches seriously hampered efforts to control outbreaks in mid-October, when the number of cases in the UK were rising drastically.

Emails sent to NHS clinical-level contact tracers on 15 and 16 October said there were ‘huge IT issues’ affecting the system — built by private companies.

The emails, reported by The Guardian, said there were issues with ‘Tier 3 contact escalations’ getting ‘stuck’ in the system and with ‘outbreak cases that require contact tracing’.

There’s ‘absolutely no chance’ the Government’s new 15-minute coronavirus tests are accurate enough to get life back to normal, a leading expert warned today.

It emerged last night ministers are set to buy up to 200million of the £5 kits, which are made by US company Innova and give a ‘yes’ or ‘no’ result in a quarter of an hour.

They have been heralded as a key to unlocking the economy when the second lockdown ends, allowing people with a negative result to visit the theatre, cinema or a sports event.

But Professor Jon Deeks, a biostatistician from the University of Birmingham, warned they could be ‘dangerous’ if Brits who test negative see it as a green light to visit elderly grandparents.

Read More:  Fact-checking – by itself – is inherently flawed on health care topics

Trials of the devices by Public Health England and Oxford University found they could detect up to three in four positive cases.

This essentially means the system was playing up in Tier 3 areas – Covid-19 hotspots in England where restrictions are the toughest to try and curb high infection rates.

A contact-tracing source told the paper that Tier 3 contact escalations often related to outbreaks at hospitals or care homes.

A second contact tracing source said the IT issues were ‘highly prevalent’ for a week and led to delays of up to 48 hours in reaching infectious people and their close contacts. It leaves room for people to spread the coronavirus to more people.

The glitch occurred in Synergy, the software system used by call handlers in the central NHS system.

It’s run by the private firm Sitel, which is being paid £82m by the government for its contribution, to the frustrations of some experts who have made repeated calls for resources to be sent to local health teams instead.

The Department of Health said today that a miscalculation occurred in the processing of a very small proportion of records in the contact tracing system.

It claimed the issue did not affect people receiving their Covid-19 test results, but did not refer to implications for close contacts.

It said it had since been corrected so that it cannot happen again.

A spokesperson added: ‘We have built the biggest testing system per head of population of all the major countries in Europe and the largest diagnostics network in UK history.

‘Through the work of NHS test and trace, over 1.7million people who may otherwise have unknowingly spread coronavirus have now been reached, and 80.4 per cent of all contacts where communication details were given have been told to self-isolate, helping to break chains of transmission. We continue to work tirelessly to make the service quicker and more effective every day.’

Promising data today gave a glimmer of hope that the system was finally improving, with a record 85 per cent of Covid-19 cases reached by contract tracers. 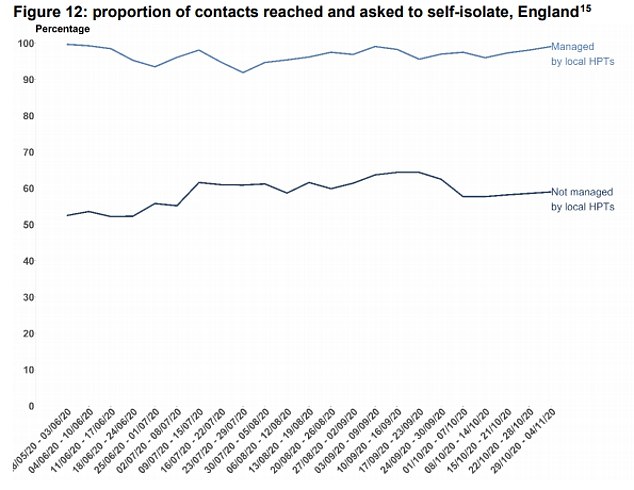 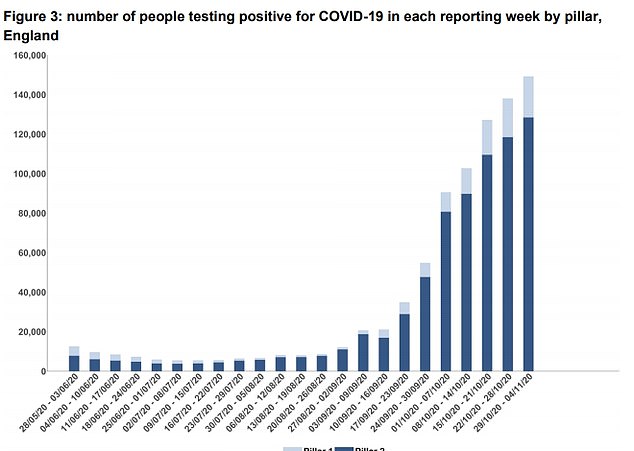 Although an improvement, the Department of Health figures still revealed that 13.2 per cent — or 18,600 — of those who tested positive were not reached and told to self-isolate.

The other 1.9 per cent — or 2,600 people — never provided any contact details for them to be tracked down.

The system also failed to reach almost 40 per cent — or 124,000 — close contacts of people who tested positive for the virus.

It means that thousands of infected patients, and their potentially-infected contacts, were allowed to spread the virus.

Contact tracers said they identified 314,800 close contacts of those who tested positive in the seven-day spell to November 4, a drop 0.2 per cent from the 329,100 identified the previous week.

Dr Susan Hopkins, medical adviser to Test and Trace, suggested last week that the reason so few contacts are being reached is because people are not picking up their phones to an unknown number.

Testing statistics for the system, published today by the Department of Health, also revealed more people are receiving their results within 24 hours who visit local, regional and mobile testing sites.

But less than half of all tests (except home-testing kits) are being turned around on time, with just 58 per cent providing results within 48 hours.

This is up from 36 per cent providing results in the same time frame the previous week.

All the testing figures remain streets away, however, from Boris Johnson’s promise that 100 per cent of tests would be turned around within 24 hours by the end of June.

The PM’s spokesman said: ‘We have been focused on improving test turnaround time alongside increasing capacity. These are getting better… you are seeing improvement in turnaround times for Test and Trace. It is a very large organisation that we have built in a matter of months.’