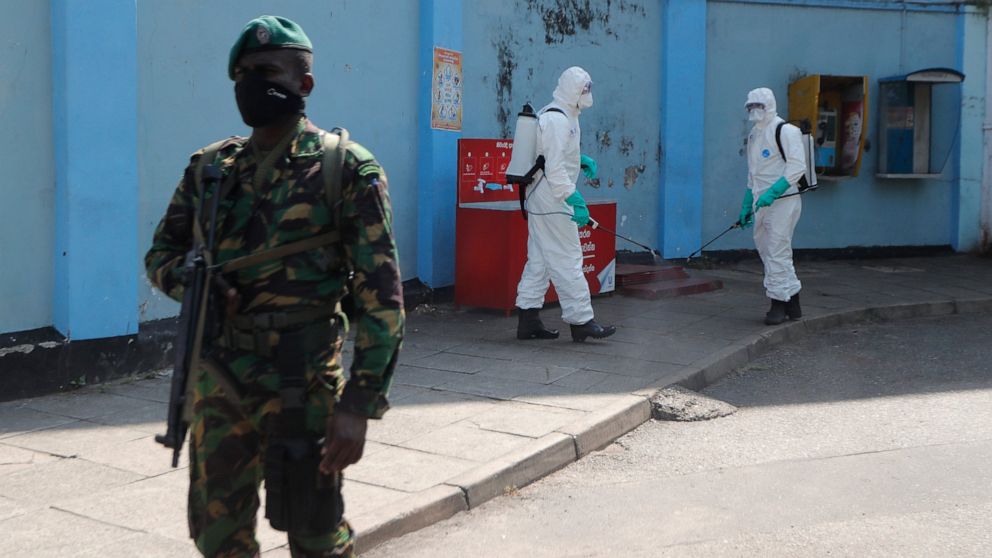 The Latest on the coronavirus pandemic. The new coronavirus causes mild or moderate symptoms for most people. For some, especially older adults and people with existing health problems, it can cause more severe illness or death.

TOP OF THE HOUR:

— U.N. says 86 staffers around world have reported cases of virus

German authorities closed non-essential shops and banned gatherings of more than two people in public at the beginning of the week. Schools, bars, restaurants and clubs are also closed.

Merkel’s chief of staff, Helge Braun, told Saturday’s edition of the daily Tagesspiegel that “we are not going to talk about any easing before April 20 – until then, all measures will remain in place.” He said that officials will say “in a timely manner before then” what will happen after that date.

Braun said that “the older and the sick will have to reduce their contacts for significantly longer.”

Germany has recorded more than 50,000 cases of the new coronavirus, according to a tally by John Hopkins University, with 351 deaths – a lower death rate than in many other countries.

COLOMBO, Sri Lanka — Sri Lanka police say they have arrested thousands, including many who were praying in a mosque, for violating a countrywide curfew imposed as a part of stringent measures designed to contain the spread of coronavirus.

Read More:  Italian city to pay up to 250 euros to commute by bikes

The number of positive cases has risen to 106 and the government has ordered police to strictly impose the curfew to ensure social distancing across the country.

On a tip that a group of people were praying in a mosque in the town of Horowpathana, about 124 miles (200 kilometers) north of Capital Colombo, police and health officials went to the mosque and arrested 18 while several dozens have fled.

The government has banned nonessential travel. Police have arrested 4,600 and seized 1,125 vehicles for violating curfew since March 20.

UNITED NATIONS — The United Nations says 86 staff members around the world have reported cases of COVID-19.

U.N. spokesman Stephane Dujarric said most of the infected staff members are in Europe, but there are also staffers in Africa, Asia, the Middle East and the United States that have the coronavirus.

To try to reduce transmission, he said the vast majority of U.N. staffers are working from home.

At U.N. headquarters in New York, where a normal day would see staffers’ passes swiped 11,000 times, the number of swipes Friday morning stood at 140, Dujarric said.

In Geneva, he said, the number of staff at the U.N. office has dropped from around 4,000 people on a regular day to just about 70 on Thursday. In Vienna, more than 97% of U.N. staff are now working remotely, he said. And, in Addis Ababa, Ethiopia, 99% of staff are working from home.

UNITED NATIONS — The 191 parties to the Nuclear Nonproliferation Treaty have decided to postpone a conference to review its implementation because of the coronavirus pandemic, the United Nations said Friday.

The treaty is considered the cornerstone of global efforts to prevent the spread of nuclear weapons and the parties hold a major conference every five years to discuss how it is working. The meeting had been scheduled for April 27-May 22 at U.N. headquarters in New York.

U.N. spokesman Stephane Dujarric said the review conference will be held “as soon as the circumstances permit, but no later than April 2021.”

The U.N. said earlier this week that the conference was likely to be postponed, but the conference president-designate, Ambassador Gustavo Zlauvinen of Argentina, wanted to consult governments that are parties to the treaty.

The Nuclear Nonproliferation Treaty, which reached its 50th anniversary March 5, is credited with preventing the spread of nuclear weapons to dozens of nations. It has succeeded in doing this via a grand global bargain: Nations without nuclear weapons committed not to acquire them; those with them committed to move toward their elimination; and all endorsed everyone’s right to develop peaceful nuclear energy.