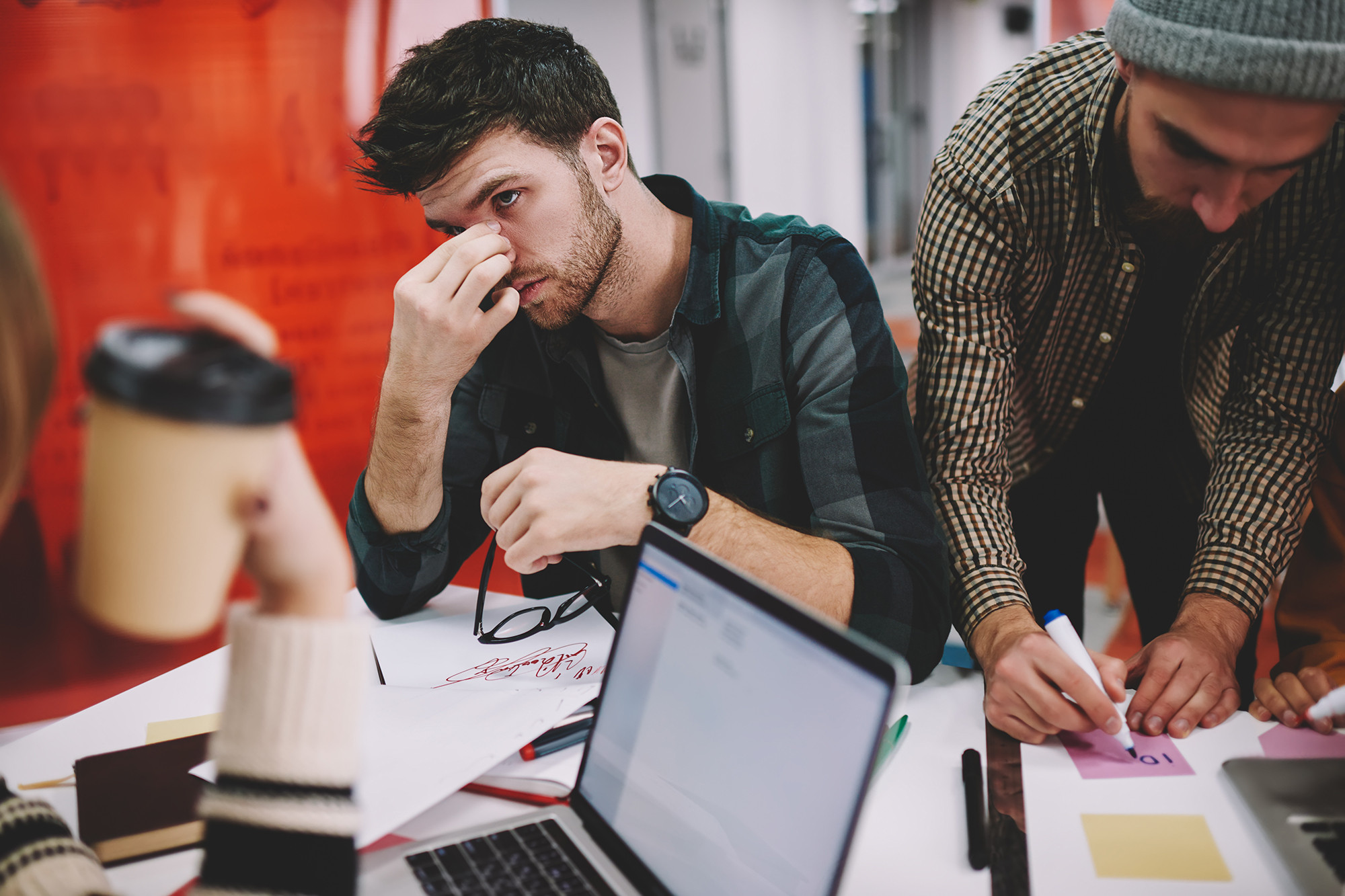 He’d like to tell the guy in the next office to shut the f–k up. Robert Smith’s colleague won’t stop singing, humming and whistling. “I have to listen to it 80 percent of the day,” says the Huntington, NY, resident.

Smith, an investment banker who has asked that his real name be kept confidential, adds that it’s not one song from start to finish that he has to endure, but 30 to 40 second clips from tunes like “On My Own” from Les Miserables or “Arthur’s Theme (Best That You Can Do)” by Christopher Cross. “It is a daily hell of name that tune,” he says.

Workers all over the city and beyond are annoyed, and sometimes even angry, about their colleagues’ lack of manners, common sense and consideration. Offenses range from reheating fishy leftovers from yesterday’s lunch in the company microwave, to peeing without first hitting the mute button during conference calls.

Workplace therapist Brandon Smith says that while some of these annoyances are just faux pas, others are due to a lack of maturity or emotional intelligence — or even colleagues who just don’t care. Here are some of the behaviors that are aggravating New Yorkers at work. Make sure you’re not guilty of any of these:

Hogging the bathroom for social reasons

While some offices have plenty of potties, others are gender neutral single-seaters that everyone has to share.
“Where I work, there’s a woman who holes up in the bathroom, sits on the toilet and does Tinder,” says Phil, 25, a Web site architect who works in the West Village.
How does he know? ”She tells her friends about who she plans to hookup with when she comes out,” he says. Someone once taped up a sign that read “Stop swiping, start wiping”’ on the bathroom mirror, but “I don’t know if she ever saw it,” he says. “It was promptly removed.”

Fashionistas who reveal too much

Not all companies have written dress code policies with which workers are asked to comply. Instead, people tend to dress like their colleagues. That was a problem at an ad agency in Midtown this summer when a woman showed up wearing what appeared to be only a men’s shirt and a pair of heels. “A few days later, two other women came in dressed like that,” says Jennifer, a digital marketer who works at the firm. “The guys in the office complained that it was distracting,” she says, adding that the women were asked to go home and change. It turned out that they were in fact wearing micro-skirts beneath the shirts. The company is now thinking about making a rule regarding how much skin employees can show while at work.

Paying attention to your phone, not the people you’re with

If you want to tell someone you’re with that you have something that’s more urgent than talking to them, or discussing what’s on the agenda, then go ahead and look at your phone during a meeting, says Alyssa Gelbard, an executive career consultant and personal branding expert at Point Road Group in Midtown. “It’s rude, it impacts productivity and even worker happiness,” she says, explaining that it’s hard to have relationships with people who stare at their phones. Gelbard says that apps with audible notifications are almost as annoying.

Some workers actually need to sit near windows to feel the light due to health issues, and others require emotional support animals to quell their anxieties. “But there are people where I work who take advantage of our company’s accommodation policies and then spend their weekends watching movies in the dark and partying while someone sits for their dogs on weekends,” says Barry, a product manager at a media company based in Midtown. “Look, I’m not being insensitive, but when I hear someone brag about the story they told in order to get special treatment, it irks me,” he says. “Why don’t I get my doctor to write me a script about how I’d be less anxious if I went to an all-afternoon Yankees game?”

Read More:  Trees And Their Importance For A Healthy Environment

Most human resources managers appreciate workers’ good exercise habits — these employees tend to be healthier and may even lessen the cost of employee health insurance premiums — but their co-workers don’t always feel the same way. Especially when cyclists who bike to the office hang their wet gear in their workstations to dry. “Yuck, just yuck,” says Bonomo, who once endured a co-worker whose apparel and accessories sat around giving off obnoxious odors all day.

Overloading your workspace with personal belongings

How many pairs of shoes can you fit into a cubicle? There seem to be at least two women looking to set a record for footwear accumulation at a downtown investment bank. “I used to think that having all those shoes around was practical,” says Tracy, their co-worker, adding that her colleagues usually walk to work in flip-flops, sneakers or Hunter boots, and then put heels on when they arrive. “But now people are getting irritated because [these two women] probably have more shoes here at the office than in their apartments.”

Here’s how to cope with these dilemmas:

“Address the problem with humor first,” says Smith. If that doesn’t work, he recommends starting the conversation in a disarming way, with something like, “I don’t know how to approach this. I know you didn’t intend to offend me, but is there any opportunity for change?”

Steve Weingarden, Ph.D., an organizational psychologist and president of Innovators of Change, says “holding back could cause a train wreck. Like it or not, you have to have a relationship with your co-worker, so don’t tiptoe around the issue. Be up front and as direct and specific as possible.”

Remember that most people don’t intend to be offensive and that sights, sounds and smells that are foreign and unappealing to you might be normal or comfortable to them, says Smith. But, “if you can’t live with it, you’re going to have to talk about it.”