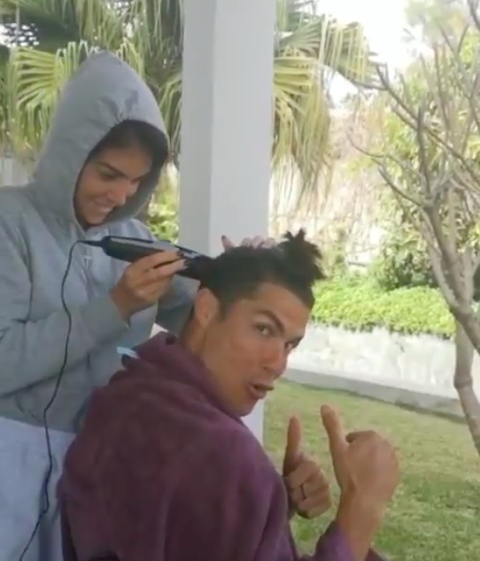 One of the many consequences of spending a prolonged period of time in isolation during the COVID-19 pandemic, besides the boredom and cabin fever, is the fact that at some point, sooner rather than later, your hair is going to become an unmanageable mess.

If you’re the kind of guy who likes to visit the barber once every month or so for a fade and a tidy-up, then you’re already likely approaching the point where you have to decide: do you want to use this downtime to try growing your hair out and experimenting with different styles? Or should you just make life a little bit easier by shaving it all off?

A growing number of guys are opting for a lockdown lock-off and getting buzzcuts to see them through the quarantine period, including several celebrities. This week, soccer stars David Beckham and Cristiano Ronaldo both debuted their newly shorn scalps on Instagram. “Stay home and keep stylish,” wrote Ronaldo in the caption for a video showing the upkeep of his undercut, while Beckham said shaving his head “just had to be done.” Both posts included hashtag reminders to stay home and stay safe during the pandemic.

Actor Anthony Rapp, best known for his roles in Star Trek: Discovery and RENT, shared a “before and after” side-by-side on his socials, saying: “I’ve always wondered what I would look like with a totally buzzed head. Well, what better time to discover the result than while I’m staying home?”

Meanwhile, actor and rapper Riz Ahmed, who has appeared in everything from Rogue One to Girls to The Night Of, said that his #stayhome haircut “got outta hand”:

Read More:  Best Morning Foods That Give You Energy And Focus

Of course, even with something as simple as a buzzcut, it can be tough to do it evenly. Cody Simpson asked his girlfriend, singer Miley Cyrus, to help him clip those hard-to-reach places.

Blake Shelton, on the other hand, recruited his wife, Gwen Stefani, in maintaining his “quarantine mullet.”

Even former presidential candidate Pete Buttigieg has been following the trend; after growing a beard in the aftermath of dropping out of the race, he showed off his buzzcut in a live broadcast with Georgetown Politics.