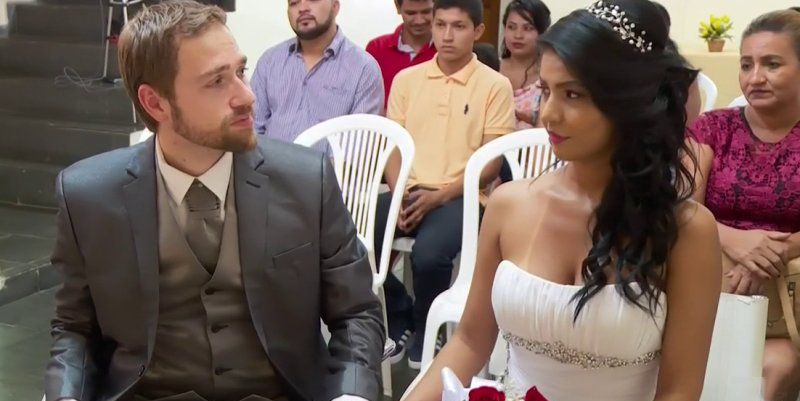 What makes this TLC program—which recently premiered its new season—such a must-watch slice of outré entertainment? Is it the people? The editing? The stakes? That one scene in the popular spin-off Before the 90 Days where a dude threatens to jump into the Amazon River after he admits to his criminal record? Or perhaps it’s everything: The perfect storm of unreality—and a lot more hiding within it.

At its core, the hit show is about couples obtaining the K-1 visa—or fiancé visa—which allows a U.S. citizen to bring their foreign partner to America, with the caveat that if the partner wants to stay after 90 days, they need to get married. Those three months are spent getting a crash course in American culture, meeting future in-laws, preparing for a wedding, and (more often than not) suffering an emotional breakdown. Now six seasons (and three spin-offs, with a fourth on the way) deep and possessing a cultish social-media following, it’s time ask yourself: Why am I not watching 90 Day Fiancé?

This isn’t the first banger to come out of TLC’s vastly improved lineup: My 600-lb Life, Dr. Pimple Popper, Sister Wives… The channel has made huge strides in trash programming since the ‘90s, and it shows no signs of receding. What gives TLC an edge over networks like ABC or Bravo is the talent. Whoever’s running the casting department over there should be knighted. Where series like The Bachelor too often rely on a contestant’s looks or personal online following to carry the show, 90 Day Fiancé finds people who are—for lack of a better phrase—out of their mind. Even when you do see an attractive or charismatic person, they’re almost guaranteed to provide some unbelievable moments.

Read More:  Know How To See The Warning Signs And Defeat Vicodin Addiction

So much of the tension in 90DF comes from the difference in the approach to honesty between America and basically every other country. Azan, for example, admits on camera that he’s indeed attracted to Nicole, but only about 55 percent attracted.

Worthwhile reality TV almost always comes with a devoted fan base. The big difference between a Bachelor subreddit and the fans of 90DF is the level of passion and sleuthing.

“Reddit is really only one part of the total fandom,” says 90DF die-hard fan and former Reddit moderator Katie_Not_Holmes, who asked to remain anonymous. She goes in deep with the show and connects with fans on a borderline-obsessive level. “I’ve heard hundreds of people say that they enjoy their time in a Facebook group or on a subreddit more than their ‘real life.’ The Facebook groups have their own ecosystem. One of the more toxic groups stole memes from Reddit, and we had a weird screenshot war.

At time, the fan culture has even interfered with TLC’s own interests. The network has allegedly warned talent that engaging with viewers could lead to spoilers.

“This season’s cast was told repeatedly by the producers not to interact with ‘superfans such as Katie_Not_Holmes,’ which was—of course—leaked to me immediately,” she adds. “But real talk, it’s a fucked-up community.” (Katie_Not_Holmes sent an email from production staff to MensHealth.com to confirm the note to cast members, but TLC has not yet responded to an inquiry about the incident.)

And yeah, it is a little fucked up. Viewers are constantly meme-ing and insulting, as well as calling out TLC on inconsistencies in editing or details about certain characters. At the same time, it’s this ridiculous attention to detail that humanizes the cast and makes them seem like more than characters. Scrolling through the Facebook group 90 Day Fiancé Uncensored almost feels like your high school reunion: People share pregnancy photos from the cast and give updates on past couples.

Audiences have finally figured out that what they see on reality TV isn’t exactly reality. Producers still have a heavy hand in the trajectory of storylines to add suspense. So seeing behind-the-scenes footage adorned with firsthand commentary gives a sense of real reality and adds insight into the lives of these people that you would never get from TLC.

“It’s not my American dream.”

On the 90DF subreddit, fans have the chance to trash-talk their hearts out while also leading intelligent(-ish) discussions. What you’ll notice first are the insider references—phrases like “soshul meeja,” “evuhdens,” and “mai cuhreer.” Keep in mind, most of these phrases come from the Americans on this show.

And, really, that’s one of the most important takeaways from this show. You see people coming from Jamaica, Indonesia, and Mexico for a better life in America. Some of them are coming over for the right reasons, and some want that piping-hot Green Card for its own sake. In any case, they think America is what it is in the movies and are almost never prepared for the realities of living somewhere like rural Oklahoma with a man-child who’s maybe had date nights with his cat. This is 90 Day Fiancé—a look at the U.S. through the eyes of people who think the streets are paved with… well, you know the story.

Read More:  Bond 45 is back with a perfect show business ending

Last week’s episode featured a segment that proved to be the crux of the show. Colt is a man living outside of Las Vegas with his mother and cats who falls in love with an objectively more attractive Brazilian woman named Larissa. It only takes a few minutes to see that their courtship appears to be one-sided. Cole picks up Larissa from the airport, where she immediately chastises him for not bringing flowers. Upon pulling up to the famous “Welcome to Las Vegas” sign, you can see the disappointment written on Larissa’s face.

Then comes the already iconic line: “It’s not my American Dream.” This couple unknowingly demonstrates the show’s lifeblood: America is not what people think. For the foreigners who have to tirelessly maneuver their way into America and deal with the xenophobia of their significant other’s family and friends, the end goal is… such a bummer. Sure, there are the couples who end up perfectly happy after marriage, but then there are the ones who leave their homes for an America they weren’t promised.

Of course, the U.S. can be the land of opportunity and hope for those from dangerous countries. But for those with happy enough lives in places they’ve been fooled into thinking are lesser than America, 90 Day Fiancé is a preview of what this country is really like. The streets are not paved with gold, we’re not all rich, and some of us can be plenty hateful to newcomers. Larissa’s reaction to the Las Vegas sign says it all.