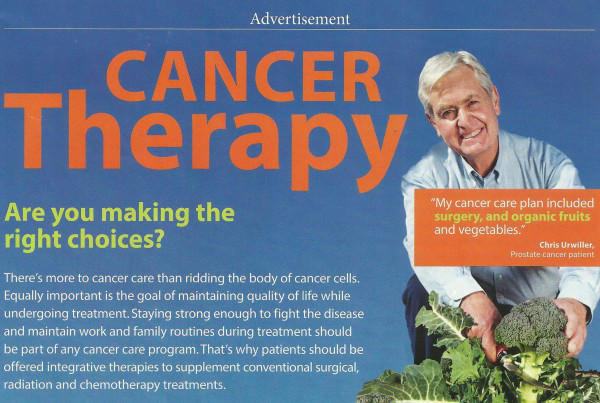 In poll after poll it has been shown that the number one health fear of all Americans is cancer. It does not surprise me that hospitals have learned to play on this fear by making unsubstantiated claims about their results in treating cancer. The reason is not complicated. It is money.

It is projected that by the year 2020, 207 billion dollars will be spent on cancer treatments. Even a small piece of this large sum translates into a substantial amount of cash and justifies spending big bucks in order to attract clients with cancer.

A comprehensive study of hospital advertising for cancer treatment was published by the Annals of Internal Medicine in 2014. It reported that cancer treatment ads as a class rely on emotional appeals evoking hope or fear. Nearly half of the TV spots include testimonials. The ads in essence say that you can be saved if you make the right choice or doomed if you do not.

Hospitals are able to market this way because they are not held to the same standards as drug manufacturers. A hospital is allowed to say in an ad that  our hospital is where miracles happen. Then they can then provide a testimonial from “Joe”. who was about to die from cancer and is now going to live because of the outstanding cancer treatment that he received at the hospital.

This sort of advertising is allowable. So if and when you see ads like this do not accept them at face value. Do some research of your own.

Read More:  “I Took My Nipples For Granted — Until I Got Breast Cancer”