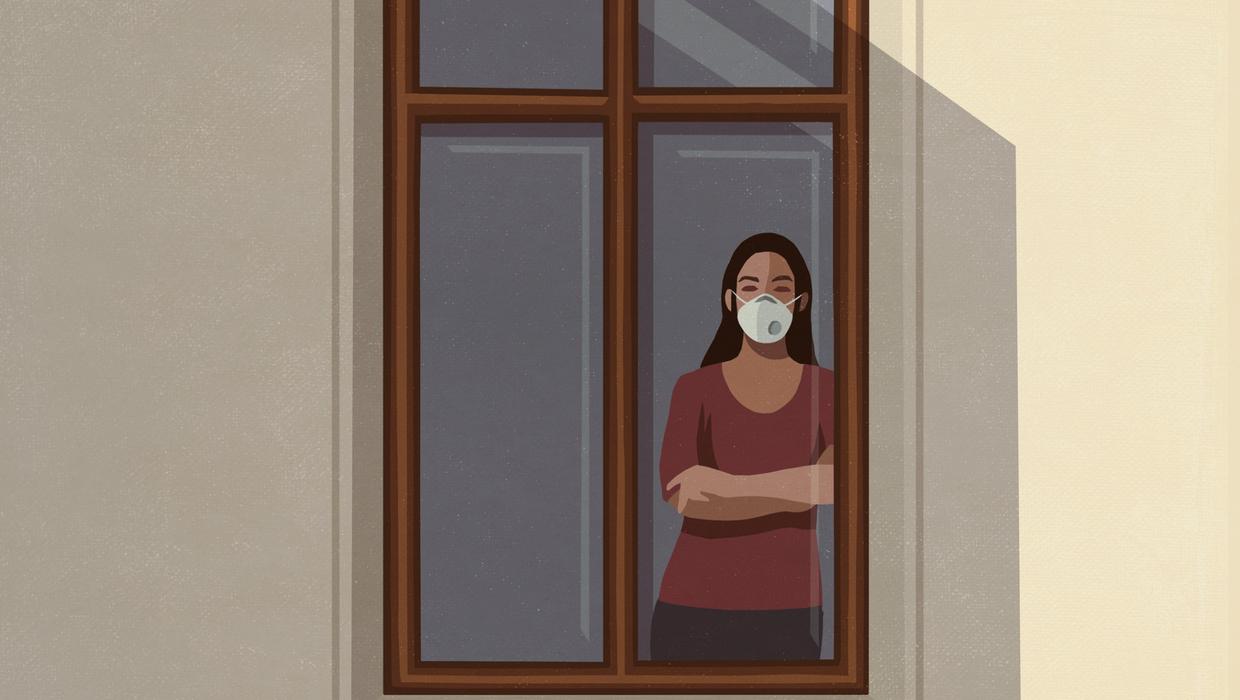 ‘In 1951, friendless and isolated at college, Sylvia Plath described her loneliness as a “contagion”, “like a disease of the blood”. Almost 70 years on, a different type of contagion has for months separated us all from each other; as restrictions slowly lift and we tentatively begin to re-engage, we have had to confront our own sense of loneliness in lockdown. Even the most robustly self-contained have been feeling it.

While under less extraordinary circumstances we often crave and seek solitude to restore our equilibrium, few of us like to admit to its shameful shadow, loneliness. Yet the pandemic has made many of us feel lonely. Can we learn from the experience? Could this moment of universal lockdown-induced loneliness be useful longer term, if it awakens in us empathy for and awareness of those who suffer from the more chronic kind? The kind that has been killing people prematurely long before Covid? And meanwhile, is it possible to convert negative feelings of loneliness into a positive state of solitude?

Unlike solitude, loneliness is a relatively modern idea, an emotion rather than a factual state of being. Its impact on our health, both physical and mental, is alarming – chronically lonely people are, says the UK’s National Health Service, 30pc more likely to die prematurely than the non-lonely. Pre pandemic, loneliness had already been deemed “an epidemic”, by the US Surgeon in 2017, and “the leprosy of the 21st century” by The Economist in 2018, the same year Britain appointed a Minister for Loneliness. It is not what we want to be, yet millions of us are.

So what is it? Cultural historian Fay Bound Alberti, in her 2019 book A Biography of Loneliness, defines it as “a conscious, cognitive feeling of estrangement or social separation; an emotional lack that concerns a person’s place in the world.” It is “an emotion cluster, a blend of different emotions that might range from anger, resentment, and sorrow to jealousy, shame, and self-pity.”

And it’s physical. The late US neuroscientist John Cacioppo, known as Dr Loneliness, argued that as primates, we are designed to live together. Over millennia, we evolved a fight-or-flight survival response when separated from our social group, which manifests in modern loneliness as hypervigilance: anxiety, stress, insomnia, increased blood pressure, sometimes emotional eating to self-soothe (there is a connection between chronic loneliness and obesity). Illnesses linked to long-term loneliness include depression, anxiety, heart attacks, strokes, cancers, and decreased immunity.

Read More:  How Much Do You Know about Circadian Rhythm Disorder

Dr Bound Alberti suggests that like obesity, loneliness is a “disease of civilisation”, “chronic, pathological and associated with the way we live in the modern, industrial West”. It’s a side effect of “the all encompassing ideology of the individual” , rather than an emotional state integral to the human condition. It’s modern and man-made, emerging as a term and an concept around 1800; before that, loneliness was known as ‘oneliness’, and wasn’t perceived as problematic because it was so rare.

When Daniel Defoe published Robinson Crusoe in 1719, his shipwrecked hero does not experience loneliness on the desert island. Aloneness yes, but not loneliness. Historian David Vincent, in his new book A History of Solitude, writes how Defoe “argued the healthiest form of solitude is embedded in the busiest of lives.” Creative endeavour, for instance, requires solitude, where the individual is so engaged in the flow of what they are doing that time flies by, unnoticed. Not that solitude was always considered healthy – in 1667, diarist John Evelyn wrote: “Solitude produces ignorance, renders us barbarous, feeds revenge, disposes to envy, creates witches, dispeoples the world, renders it a desert, and would soon dissolve it.”

Crikey. And yet today, the gulf between solitude as an idealised state (far from the madding crowd at, say, a boutique wellness retreat seeking greater self awareness and/or spiritual clarity), and loneliness as a coruscating 21st century killer, has never been wider.

We are all susceptible – the old, the young, the bereaved, the isolated care givers, the unhappily partnered, the atomised, the permanently online. And most of all, the poorest.

We forget about the acute loneliness of those whom Bound Alberti calls the “roofless and rootless” – homeless people and refugees. The only thing worse that being lonely inside your four walls is being lonely without the comfort of your four walls: “Loneliness is not merely a mental, but also a physical state… our experience and engagement in the world is always mediated through our bodies as well as the things that define us: from clothes and crockery to cars and carpets, objects give rise to individual and social meanings.” Or as Joni Mitchell put it, “You don’t know what you’ve got till it’s gone.”

Read More:  All about Anxiety Disorder

Obviously, living alone does not automatically result in loneliness (remember Sartre’s warning that hell is other people, while Virginia Woolf advocated a room of one’s own) – solitude has long been a luxury, once associated with privileged white men, the Romantic poets being the only ones who could realistically afford to wander lonely as a cloud. But for every 21st century urban professional living their best life in a converted loft space, how many impoverished isolated individuals are there, longing for more human contact? For every Greta Garbo, there is an Eleanor Rigby.

It’s cultural – ‘lonely’ in Arabic translates as ‘single’ in English. “Loneliness in collectivist cultures has been associated with a lack of family support,” writes Bound Alberti. “Whereas loneliness in individualistic cultures speaks to a lack of extra-familiar connection.” Billy No Mates, as it were. Ireland, long a collectivist culture, has been transformed through prosperity to a more individualistic one; in 2018, 400,000 Irish people reported suffering from loneliness. During lockdown, this figure rose to include 41pc of the entire population.

So how do we deal with it? Can loneliness be reframed? Short term, the answer is yes. Psychoanalyst Noel Hess, in a 2004 essay on loneliness, writes: “The pain of being alone is fundamentally related to the pain of being alone with oneself, and what we feel to be inside us, be it predominantly persecutory, critical and aggressive, or loving, supportive and forgiving.”

In other words, self-compassion and feeling comfortable in our own company is key in navigating episodic loneliness, or enforced solitude. And if your feelings of loneliness are raging out of control, you can use DIY cognitive behavioural therapy techniques to damp them down. All you need is pen and paper.

Clinical psychologist Eva Doherty reminds us that solitude is a fact, and loneliness is a feeling. “Loneliness may reflect a mixture of several co-existing feelings – sadness, fear, anger, frustration, perhaps even disgust,” she says. “The critical difference between loneliness and solitude is most likely observed in the thought processes underpinning both.

“The most helpful way to approach your feelings of loneliness is to introspect, and write them down, to counteract the feeling of being overwhelmed by them: ‘How am I experiencing loneliness’? If you’re feeling frustration, for example, there may be a mixture of fear (‘This is never going to end’) and anger (‘Why is this so hard?’), or sadness (‘I miss hugs’).

“Explore this on a deeper level, and dig through the layers of feelings.”

This is not, says Dr Doherty, about supressing your feelings of loneliness via unrealistic positive thinking – it’s about pinning down runaway thoughts and feelings and shining a light on them, until they are neutralised by your own logical investigation. You are not going to die alone and be eaten by your cat – that is your imagination running away with you, because you are feeling fearful.

“It’s about keeping your thinking close to what you know, rather than filling the gaps with terrible unknowns,” she says. “It’s essential to write it all down. And then write an alternative: ‘This is going to end.'”

For many of us, as we slowly reconnect, this loneliness is already ending. But as lockdown eases, what about all those people who remain chronically lonely for all kinds of different reasons? “How do we reframe loneliness in the neoliberal age?” asks Dr Bound Alberti.

David Vincent writes how the invention of the internet in 1991 and the smartphone in 2007 has driven “the conscious experience of solitude from a privilege of the educated male to the practice of all but the poorest in the late modern era.”

Solitude, no longer a deviation or novelty, has become normalised – in the midst of crowds, we are hunched over our devices in our noise cancelling headphones -and loneliness more widespread.

Perhaps now that we all know acutely what loneliness feels like – from small children missing their playmates to older people missing their grandkids – we will remember the feeling, and reach out more. We won’t forget our own experiences of loneliness, and it may make us kinder.