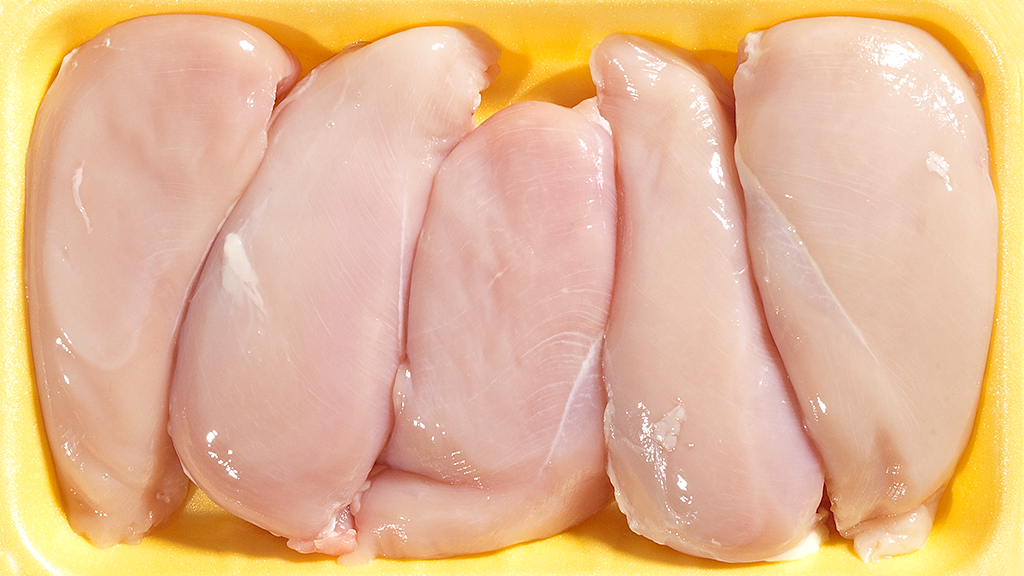 White meat, such as chicken, may raise blood cholesterol levels as much as red meat does, a new, small study details.

“When we planned this study, we expected red meat to have a more adverse effect on blood cholesterol levels than white meat, but we were surprised that this was not the case,” study senior researcher Dr. Ronald Krauss, a senior scientist and director of atherosclerosis research at the Children’s Hospital Oakland Research Institute (CHORI) in California, said in a statement. “Their effects on cholesterol are identical when saturated fat levels are equivalent.” [Busted! The 7 Biggest Diet Myths]

In the study, called the APPROACH — Animal and Plant Protein and Cardiovascular Health — trial, researchers looked at 113 healthy people, who were randomly assigned to a diet that was either high or low in saturated fat.

All the participants refrained from taking vitamin supplements and drinking alcohol during the study. Then, participants in both groups cycled through three different diets: a red meat (primarily beef) diet, a white meat (mainly chicken and turkey) diet, and a nonmeat protein (legumes, nuts, grains and soy products) diet, with each diet period lasting four weeks. Between each diet period, the individuals had a “washout period,” during which they ate their regular foods. In addition, the participants had blood tests at the start and finish of each new diet.

Read More:  Cholesterol what to avoid

In other words, white and red meats had the same effects on blood cholesterol levels, the researchers found. Saturated fats occur naturally in foods such as fatty beef, poultry with skin, butter and cream and cheeses, according to the American Heart Association. Too much LDL cholesterol from saturated fats can build up in a person’s blood vessels, causing plaque and increasing the risk of heart attack and stroke.

The team also looked at LDL particles of different sizes. (LDL, or low-density lipoproteins, are also known as “bad” cholesterol.) In general, medium- and smaller-size LDL particles are denser and heavier, and some doctors think they are more detrimental to cardiovascular health, said Dana Hunnes, a senior dietitian at the Ronald Reagan UCLA Medical Center in Los Angeles, who was not involved with the study.

Slightly larger and less dense, or “fluffier” LDL cholesterol particles are thought to be less harmful to cardiovascular health than these smaller, dense particles, Hunnes said. However, recent research posted on the International Atherosclerosis Society’s website suggests that both small and large LDL particles may increase the risk of plaque buildup, known as atherosclerosis.

The study revealed there were no significant differences in the amounts of LDL particles of different sizes in people while on the white meat and red meat diets. But eating lots of saturated fat was associated with higher concentrations of the “fluffier” large LDL particles. In all, they found that these fluffy LDL particles increased more in the red and white meat diets, compared with the plant-based diets.

If large LDL particles are less harmful than the smaller, denser particles, it’s possible that a standard LDL cholesterol test may overestimate the cardiovascular risk for people who eat a lot of saturated fats and meats, the researchers said.

The team acknowledged that their findings went against current government dietary guidelines, which encourage people to eat poultry as a healthier alternative to red meat. However, until now, there hasn’t been a comprehensive comparison of the health effects of eating red meat, white meat and nonmeat proteins, Krauss noted.

It’s also possible that there are other factors about red meat that can affect cardiovascular health, he said. [Beyond Vegetables and Exercise: 5 Surprising Ways to Be Heart Healthy]

“Indeed, other effects of red meat consumption could contribute to heart disease, and these effects should be explored in more detail in an effort to improve health,” Krauss said.

The study is well executed and rigorous, Hunnes said. It clearly shows that eating plant-based proteins is associated with lower levels of cholesterol, she said.

The finding dovetails with recent international recommendations that people eat more plants and fewer burgers, which are linked to climate change, freshwater pollution and the devastation of wildlife.

The new research had several limitations; the meats in the study did not include grass-fed beef or processed products, including bacon or sausage. Nor did it include fish, Krauss said. Moreover, the study was small and relatively short-lived, he said.

Read More:  What to know about HIV false-positives

The study was published online Tuesday (June 4) in The American Journal of Clinical Nutrition.

7 Foods You Can Overdose On