The 2019 ACA plan year is notable for the increase in insurer participation in the marketplace. Expansion and entry have been substantial, and the percent of counties with one insurer has declined from more than 50 percent to approximately 35 percent. While urban areas in rural states have received much of the new participation, entire rural states have gained, along with more metropolitan urban areas.

Economic theory and common sense lead most to believe that increased competition is unquestionably good for consumers. Yet in the paradoxical world of the subsidized ACA marketplace, things are not so simple. In some markets, increased competition may result in a reduction in the purchasing power of subsidized consumers by narrowing the gap between the benchmark premium and plans that are cheaper than the benchmark. Even though the overall level of premiums may decline, potential losses to subsidized consumers in some markets will outweigh gains to the unsubsidized, suggesting that at the county level, the losers stand to lose more than the winners will win.

One way to illustrate this is to hypothetically subject 2018 marketplace enrollees to 2019 premiums in counties where new carriers have entered the market. Assuming that enrollees stay in the same metal plan in both 2018 and 2019, and that they continue to buy the cheapest plan in their metal, we can calculate how much their spending would change by income group.

Read More:  Protect yourself from hearing hazards in your home 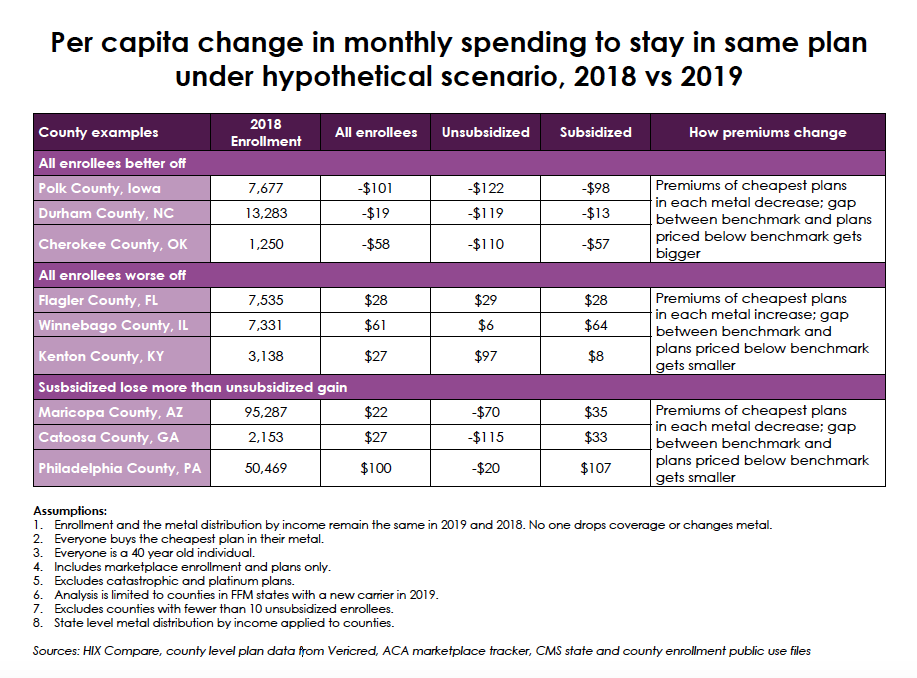 Philadelphia is a good example of a county with a mixed result. The premium of the benchmark plan declined by nearly $ 200 between 2018 to 2019, from $ 635 to $ 465 for a 40-year-old, but the premiums of the cheapest plans in each metal declined by far less, reducing the gap between these cheaper and the benchmark, and therefore the size of the subsidy. By way of illustration, a 40-year-old at 350 percent of the federal poverty limit, with an annual income of $ 36,420 per year, pays $ 101 a month for the cheapest bronze plan now. In 2019, the cheapest bronze will cost that enrollee $ 254. For an unsubsidized customer, the premium for the cheapest bronze plan will decline from $ 400 in 2018 to $ 370 in 2019.

This scenario is, of course, a great simplification of reality. Subsidized consumers who lose purchasing power will not all stay in the same metal plan. Some will shift down to a cheaper metal, while others may drop coverage. Similarly, the reduction in premiums for the unsubsidized population in some markets may encourage enrollment by some who felt priced out of the market last year. Enrollment in the often cheaper off-exchange plans are not included in this exercise, so gains to the unsubsidized may be bigger than is reflected here. Another unrecognized “winner” is the federal government, if subsidies are reduced.

These are short term effects that reflect the somewhat volatile adjustments of a subsidized market that has experienced many changes. The silver-loading process in many states served to widen the interval between the benchmark premium and the cheaper plans, increasing the buying power of the subsidy. Competition in some markets is now whittling away at that gap, reducing subsidies as well as overall premium levels.