Emily Keel, 24, is a personal trainer, mindful of exercise and her diet. She has long, thick dark hair and enormous green eyes. She has great teeth and a fabulous smile.

But she also has acne, which frequently makes her unhappy.

Yet, in a courageous attempt to support others with the condition, she bravely posts selfies as she describes her battle with her skin on social media.

“I have begun posting photos of my skin on Instagram and Facebook. I was so fed up of seeing perfect pictures online, I wanted to show something real. Acne is such a confusing and individual problem, everyone’s body is unique and reacts differently to things and I just wanted to highlight that,” she wrote. 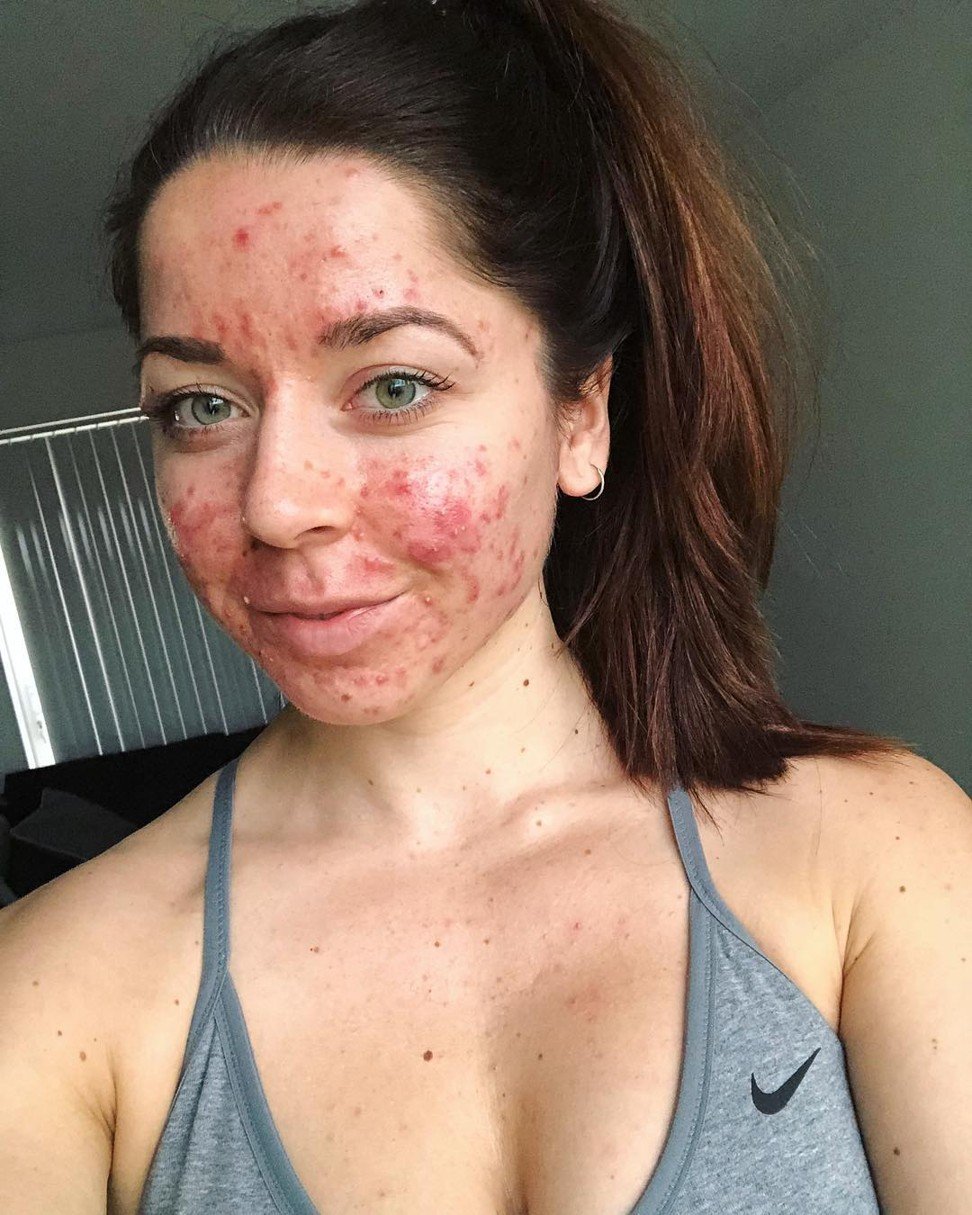 “I have tried to be honest and open about my skin as I want to help others who are going through something similar. The response has been amazing; I have had hundreds of messages from people struggling with similar issues.”

UK-based Keel, who has almost 2,000 followers on Instagram, says she was the “stereotypical ‘spotty teenager’” from the age of around 12 until she was 18.

“I can remember trips to the doctors and trying various antibiotics and creams, but nothing really worked until I started using benzoyl peroxide. This kept the mountains under my skin at bay for a few years, and stained all my bedding and towels – a small price to pay for clear skin!”

Keel is not alone in her experience. Dr Bessie Tong Bik-sai, a Hong Kong-based specialist in dermatology and venereology, says acne affects around 85 per cent of teenagers globally. Some people suffer only during their teens. For others, the condition becomes progressively worse into adulthood. It can also start in adulthood.

Keel’s complexion changed as she entered her twenties. “When I was 22, I headed off to travel around Asia and New Zealand. I left the UK full of confidence and spot-free, but I returned four months later with some really deep cystic acne.”

Read More:  Co-infection with HIV and HCV does not increase the risk of end-stage liver disease or liver cancer

Keen was diagnosed with polycystic ovarian syndrome (PCOS), the most common reproductive endocrine condition among women of childbearing age. As many as 12 per cent of teens and young women are diagnosed with PCOS.

“Any female patient who presents with either persistent acne that continues after they are 25 or acne that starts after age 25, I’ll check for PCOS,” says Bethanee Schlosser, director of the women’s skin health programme at Northwestern University’s Feinberg School of Medicine in the United States.

Eczema: what causes it, and how to get relief from the itching

It’s not just PCOS that causes acne (more male than female teenagers have acne, though around a third of women in their thirties suffer and in their case, it’s most likely PCOS is the likely culprit).

Having acne can completely take over your life. It’s physically and mentally painful, it breaks down your confidence and it affects your mood – but it also helps you learn an awful lot about yourself

Tong says there are other factors that make a person vulnerable to acne: family history, adolescence, stress, some make-up and face creams, and a dairy-rich diet can exacerbate flare-ups.

Professor Eric Huang, of the Department of Dermatology at the University of California, leads a team that is working on a vaccine to address this. The vaccine, currently on trial and expected to reach the market within five years, will “neutralise toxins in the early stage of acne vulgaris to prevent the progress of the condition”. Huang believes it will be extremely effective.

Read More:  Chronic Back Pain Relief - Ways To Deal With Recurring Back Pain

Tong says: “In addition to physical effects such as permanent scarring and disfigurement, acne has long-lasting psychosocial effects.” A review of studies concluded that acne can lower quality of life, self-esteem and mood, and increase the risk of anxiety, depression, social isolation and suicidal thoughts.

Keel doesn’t need to be told this. Early last year her skin got worse, “and I noticed how much my mood declined through the year, especially when I broke out badly in September. There are days that I don’t want to leave the house. In a world that is so focused on superficial beauty, I started to feel like I wasn’t good enough.”

She adds: “Having acne can completely take over your life. It’s physically and mentally painful, it breaks down your confidence and it affects your mood – but it also helps you learn an awful lot about yourself. There are so many different treatments, but you truly have to find what works for your body.”

The range of available treatments can be confusing.

Eczema sufferer on her all-natural solution to beating her condition

The treatment a doctor recommends will depend on a patient’s age, health, type and severity of acne, and other factors such as pregnancy.

In selected cases, laser therapy, chemical peel, steroid injection, drainage and extraction are recommended. Once the acne is under control, a patient may consider aesthetic scar removal treatment. Keel has tried many things. “I have tried going gluten free, dairy free, I have eaten less sugar, I’ve had chemical peels, IPL [intense pulse light], LED treatment, and have tried countless products and supplements to help fight the acne, but nothing has truly worked.”

Read More:  A step-by-step guide on how to choose, make, and keep New Year’s resolutions

Recently she tried Silver Serum, a product touted on Amazon as being the “first ‘smart’ antibacterial skin treatment”. It calmed her skin a little and she remarked on this on her social media. The product retailer contacted her, sent her a few free tubes, and asked her about her condition. Within days, Keel’s story appeared in one of the UK’s largest selling tabloid newspapers along with a slew of photographs. She was horrified.

“The whole story has been embellished and exaggerated – for example, the paper said I was bullied at school, I never was. The photos have been enhanced to make my skin look more red and shocking.” She agreed to talk to the retailer in a bid to raise awareness of acne, not expecting to be cast as a victim. “I am not a victim,” she says. “I don’t want to be made to sound as if I am. I have acne. Millions of people do.”

She shares her experience in the hope she might help others understand what they can do. Reducing that experience to a tube of cream does not help anybody; it only diminishes the real challenge and – often – huge discomfort of this skin condition.

Keel is about to begin oral isotretinoin. Isotretinoin interferes with almost all factors of acne development. It belongs to a group of medicines called retinoids, that work on acne by reducing the amount of sebum your skin produces, reducing bacteria and inflammation, and opening clogged pores.

With a success rate of more than 80 per cent, it has changed the lives of many sufferers. It doesn’t improve acne. It cures it.

It did mine. I hope it does Keel’s, too.