A California husband and wife, both 57, diagnosed with coronavirus were rushed to the hospital on Sunday night after they developed ‘worsening symptoms,’ San Benito health officials said.

The pair, who were also the second case of human-to-human transmission in the US, had been in home isolation.

They are among six total patients confirmed in the US, one of whom visited the emergency room of Good Samaritan Hospital in San Jose, California while wearing a mask on January 28, Santa Clara health officials said Tuesday.

San Benito County health officials came to evaluate the worsening couple on Sunday night, and determined that they needed to be hospitalized somewhere ‘equipped for a higher level of care.’

Now the couple is being treated at the University of California, San Francisco (UCSF) Parnassus, according to the San Francisco Business Times.

Read More:  Hospital patients who smoke or drink to be helped to quit

The other nine confirmed cases in the US thus far have only been reported to be in stable condition, and patient zero in the US, a 35-year-old man in Washington, was discharged Monday.

Meanwhile, five Good Samaritan Hospital employees have been given paid leave and put in home self-isolation until February 11. 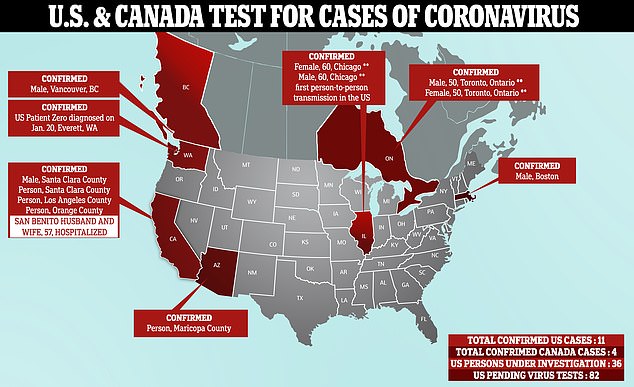 A California couple infected with coronavirus (pictured) developed worsening symptoms on late Sunday night, just hours after their diagnosis, and were hospitalized at UCSF

Meanwhile, one child among the 195 Americans evacuated from Wuhan and quarantined at March Air Reserve in California has been taken to a Riverside County Hospital with a fever, but has not been diagnosed with coronavirus.

After their Sunday night evaluation, ‘it was then determined that both patients needed to be admitted to a hospital equipped for a higher level of care,’ said Dr Marty Fenstersheib, San Benito County Health Officer.

‘The patients have been transferred out of San Benito County by specialty ambulance.’

Confirmed on Sunday, the San Benito couple are among the latest of the 11 cases of coronavirus in the US.

The husband traveled to Wuhan, the epicenter of the outbreak.

His wife, however, had not.

It’s not clear when the husband arrived back in the US, whether he passed through screening now implemented in 11 US airports, or when he developed symtoms.

According to the San Benito health department’s statement, neither of the two had left their home since the man returned from China.

They were instructed to remain in their home, under isolation protocols.

At the time, they weren’t deemed to need hospital care, but were kept under close supervision.

In a matter of hours, their conditions deteriorated.

It’s unclear exactly how their symptoms changed or intensified.

Although many groups – including the US government, in collaboration with both private companies and universities – are racing to develop therapies, most coronavirus patients have simply been given supportive treatment, such as IV fluids.

One US coronavirus patient has been treated with a drug designed to treat Ebola and showed significant improvements after just one dose, according to a New England Journal of Medicine article.

Although the virus has spread like wildfire in China and to other countries – now sickening more than 20,500 around the globe – it’s fatality rate remains fairly low, at just 427 (around two percent).

‘Even with news of this case, the risk to the general public remains low because the patient remained at home,’ the county health officials said.

They reminded the public that, although the couple had not left their home, even if they had, casual contact – like passing someone on the street or being in the same grocery store with them – is unlikely sufficient to get infected.