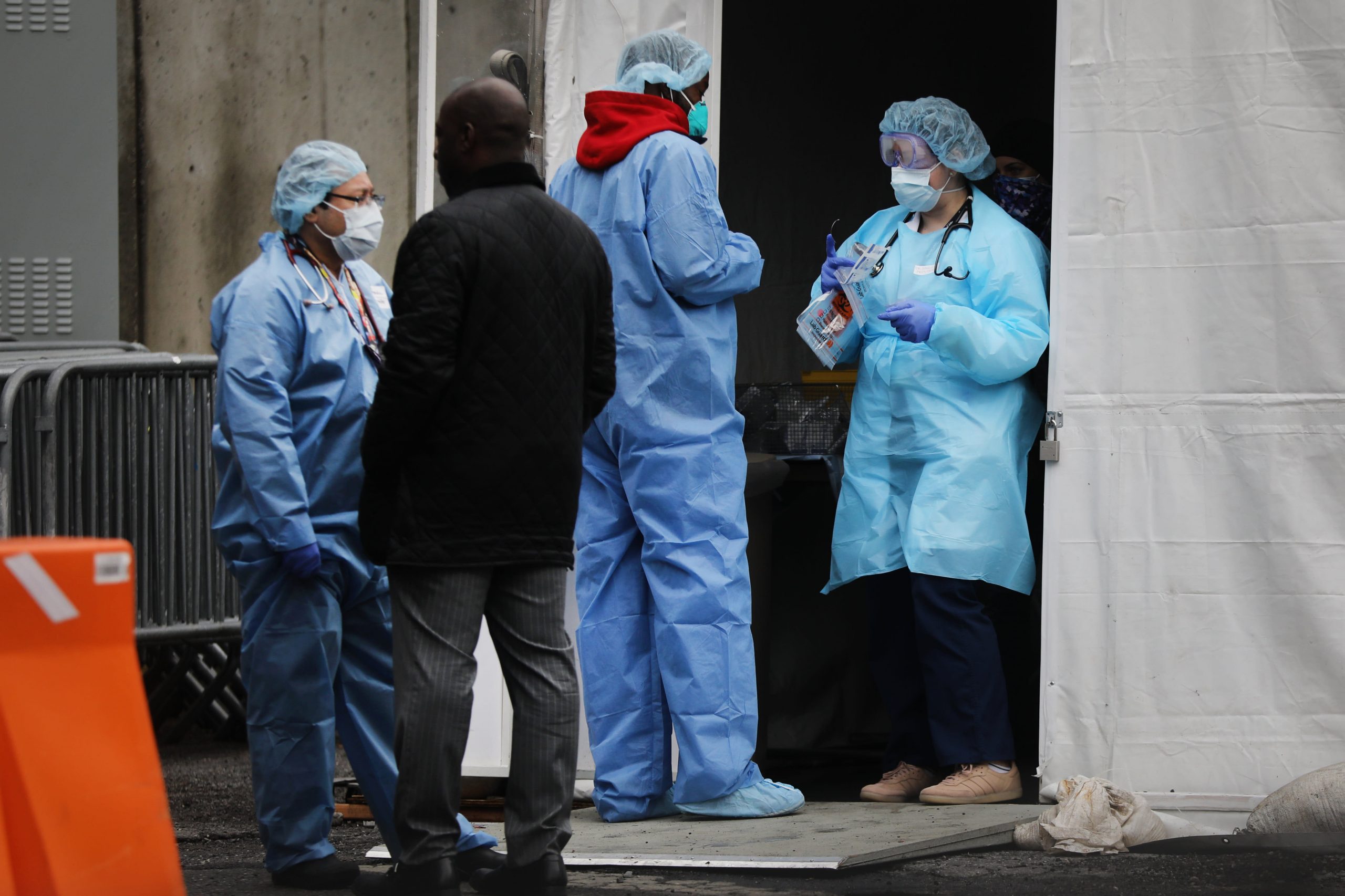 On Saturday, a video taken outside The Brooklyn Hospital Center went viral, showing a quiet scene in an attempt to counter the idea that the coronavirus pandemic has strained some hospitals.

That video, taken by former Fox News commentator Todd Starnes, jump-started a conspiracy theory that resulted in a trending hashtag and millions of video views — all of which pushed the idea that the pandemic has been overblown by public health organizations and the media.

A day later, a different video of the same hospital went viral on Facebook and Twitter. It showed dead bodies being loaded onto an 18-wheeler outside of the same hospital. The video, which was retweeted by a member of the New York City Council, was later confirmed as legitimate by the hospital.

The two videos offer a stark disparity in how the coronavirus outbreak is being portrayed on different parts of the internet, with many people on the far right going as far as to allege that overworked health care professionals are not telling the real story.

Graphic: See the day-by-day size of the coronavirus outbreak

Coronavirus map: The COVID-19 virus is spreading across the world. Here’s where cases have been confirmed.

Dr. Birx predicts up to 200,000 coronavirus deaths ‘if we do things almost perfectly’

But the grim realities of hospitals overflowing with patients seeking treatment for COVID-19, the disease caused by the coronavirus, are not always as visible from the outside, leaving space for bad actors and coronavirus denialists to push dangerous disinformation — and put themselves in harm’s way.

Starnes’ tweet — viewed 1.3 million times — was one of the first and most popular examples of the wider conspiracy theory that spread on social media over the weekend — centered on the #FilmYourHospital hashtag — that also called for people to go to hospitals and capture what was happening.

NBC News found more than a dozen videos pushing the #FilmYourHospital conspiracy. The videos were mostly filmed outside New York City hospitals, a region currently shouldering the brunt of the current U.S. outbreak, with more than 66,000 cases and more than 1,200 deaths. A few videos came from other states, including New Jersey, California and Ohio. Collectively, shared by far-right conservatives and conspiracy accounts across Twitter, YouTube and Facebook, the videos had been viewed millions of times as of Monday.

The #FilmYourHospital hashtag had been tweeted by more than 5,000 accounts by Monday afternoon, though some people were critical of the conspiracy theory.

DeAnna Lorraine, a recently defeated California Republican congressional candidate, was among the first to use the hashtag

outside Torrance Memorial Medical, a hospital in California.

it to her one million followers. “Interesting, for sure…I’ll be watching #FilmYourHospital closely,” she tweeted, adding follow-up questions about whether Lorraine had called the hospital, which the congressional candidate did not answer.

Starnes, Lorraine and Carter did not respond to requests for comment. Carter

Monday afternoon after it had been retweeted 6,200 times.

The situation inside hospitals in some of the areas of the U.S. hardest hit by the coronavirus has been thoroughly covered by many media outlets, including NBC News.

Dr. Irwin Redlener, the director of the National Center for Disaster Preparedness and a clinical professor of health policy and management and pediatrics at Columbia University, said privacy laws and respect for patients’ privacy inside of hospitals prevent some of the harrowing images of the inside of hospitals from being released.

“HIPAA and patient privacy is a final reality for every hospital in the U.S., and every health care encounter,” he said, referring to the Health Insurance Portability and Accountability Act. “These are federal laws we have to comply with, and certainly images fit into there.”

Redlener also added that some hospitals may not receive the massive influx of patients that other hospitals do — even regionalized within a hot spot as large as New York City.

“There can be particularly high-risk neighborhoods within a hot spot. There may be hospitals where they’re not putting refrigerated morgue trucks out the door,” he said. “If you take it all together, it’s one big picture. If you look at it separately, it may look like another.”

The #FilmYourHospital trend is just the newest citizen journalist form of a popular conspiracy that has plagued the coronavirus pandemic since January, said Joan Donovan, the director of Harvard University’s Technology and Social Change Research Project.

The conspiracy, which has carried hashtags including #dempanic and #plandemic, suggests that the Democrats and their allies are hoping that the economy will tank, that President Donald Trump will fail to contain the crisis, and that their own political futures will thus be secured.

With sourcing and context missing from nearly all of the #FilmYourHospital content, the videos are likely to add to the polluted information environment that has plagued the coronavirus outbreak so far.

“We’re going to see all kinds of different theories and ideas about what the impact of this virus is, shrouded in circumstantial evidence,” Donovan said. “And because we can’t source many of these materials, especially on social media, it’s going to become a serious problem in the long run.”