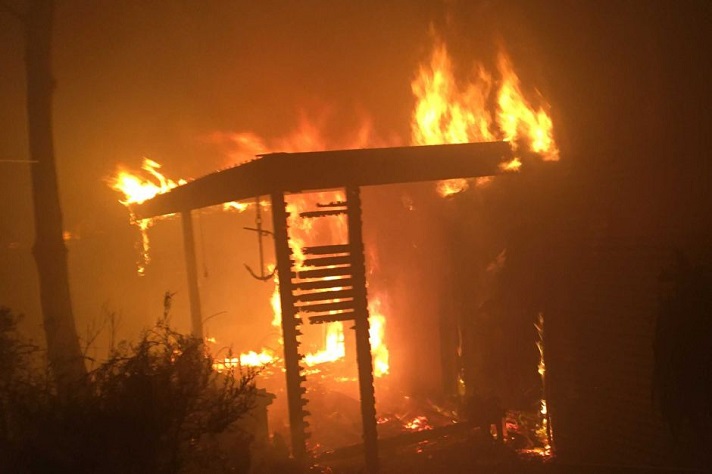 As he went to bed on 30 December 2019, Jack Egan checked the Fires Near Me app to see the progress of a bushfire bearing down on his home on Australia’s east coast. Almost 30kms away, he expected the blaze would die down overnight.

But at 6am the alerts and text messages began to arrive. The fire had made a run towards the New South Wales town of Rosedale. By 10am, people there were being urged to seek shelter. Egan’s partner Cath Bowdler evacuated for the coastline while he stayed to try and save their house. But as the firestorm roared in and properties along the street ignited, the heat proved too much.

“I knew I would die if I put a foot wrong but I really didn’t have time to be afraid,” Egan said of the moment he realised he’d have to jump through a window and run 30 meters to a neighbor’s basement as his home was engulfed in flames. “I was more afraid for Cath that she hadn’t made it to the beach.”

The unprecedented Australian fires have burned through 11 million hectares, claiming more than 30 lives, 2,700 homes and an estimated one billion animals.  Within the disaster, the Fires Near Me app created by the NSW Rural Fire Service, has been compulsively used by people in bushfire-affected areas and beyond to monitor the unfolding crisis in the worst hit state. In November alone, it was downloaded 1.28 million times.

Assistant Commissioner Kelly Browne, the fire service’s CIO, told Healthcare IT News sister publicatin HIMSS Insights the app was one of the essential tools used to reach people in the danger zones. “It was certainly our intent to make sure we provided up-to-date, timely information to the public so they could make decisions around what to do,” she said.

Read More:  Au Pairs Caught Between Work and a Pandemic

Fires Near Me was launched more than five years ago, but a technology refresh including a new scalable AWS platform plus added functionality contributed to a “huge influx of users” this fire season.

The app allows people to set watch zones to receive alerts about fires in those areas. Fires are shown on a map and users can zoom in, tap on a flame icon and see details, including emergency warning levels and whether a fire is out of control. The app also displays the areas that have burned, highlighting the sheer scale of the disaster.

Browne said the ease of use of Fires Near Me and the public’s growing reliance on apps helped to drive people towards official information. “Whenever we had the opportunity we would say check out the public website or look at Fires Near Me so it was something that we heavily promoted to make sure there was one source of truth for information about these fires, and that wasn’t word of mouth or social media. People were actually going to the source, which was the NSW Rural Fire Service, for genuine information.”

The NSW RFS has also shared its learnings with other jurisdictions to help ensure a connected public can access accurate emergency details online.

But one problem with the increasing reliance on technology has been the telecommunications infrastructure, with power cuts knocking out coverage and towers suffering damage from the ferocity of fires that reached 1,000 degrees Celsius. Telecommunications companies have worked hard to continually restore downed services, and dispatched mobile Wi-Fi and charging stations to evacuation centers.

For Jack Egan and Cath Bowdler, a network outage meant that for an agonising two hours they didn’t know if the other had survived. Once the fire front had passed, they searched for each other – their incinerated house no longer the main concern. “It was gone, that was a fact, and its contents and memories and treasures,” Egan said.

Eventually he saw her within the crowd on a nearby beach and they ran into each other’s arms. “The important thing for us was that we were alive and unharmed and we were reunited, and that was a powerful experience.”

The federal government and telecommunications companies are now working on ways to prevent outages in future, with greater investment in satellite technology and temporary towers that can be dropped into devastated zones on the table. It means the role of apps during disasters will continue to grow.

For Egan, that is vital, as he believes Fires Near Me has saved lives. “I strongly suspect there would have been many more deaths without it.”

This article was first published in the latest edition of HIMSS Insights, Data Meets Privacy. Healthcare IT News and HIMSS Insights are HIMSS Media publications.