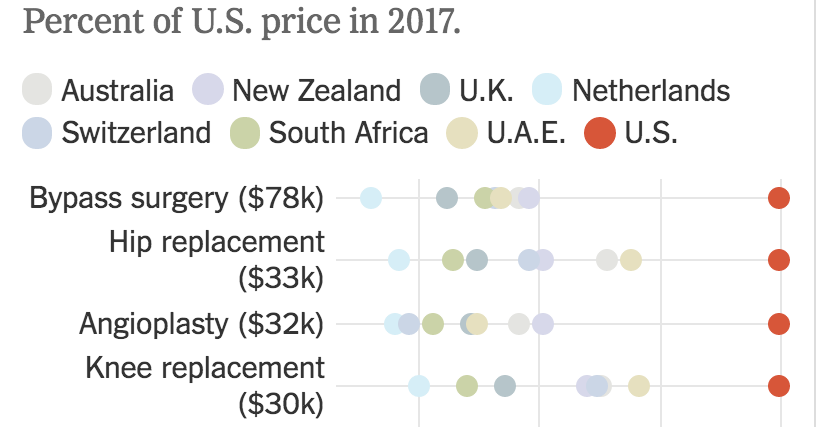 Why does health care cost so much more in the United States than in other countries? As health economists love to say: “It’s the prices, stupid.”

As politicians continue to lament the system’s expense, and more Americans struggle to pay the high and often unpredictable bills that can accompany their health problems, it’s worth looking at just how weird our prices really are relative to the rest of the world.

The International Federation of Health Plans, a group representing the C.E.O.s of health insurers worldwide, publishes a guide every few years on the international cost for common medical services. Its newest report, on 2017 prices, came out this month. Every time, the upshot is vivid and similar: For almost everything on the list, there is a large divergence between the United States and everyone else.

For a typical angioplasty, a procedure that opens a blocked blood vessel to the heart, the average U.S. price is $ 32,200, compared with $ 6,400 in the Netherlands, or $ 7,400 in Switzerland, the survey finds. A typical M.R.I. scan costs $ 1,420 in the United States, but around $ 450 in Britain. An injection of Herceptin, an important breast cancer treatment, costs $ 211 in the United States, compared with $ 44 in South Africa. These examples aren’t outliers.

Read More:  8-year-old African child who was flown to the U.S. for surgery by NBA star Dikembe Mutombo has died

“It is staggering how much the United States is more expensive,” said John Hargraves, the director of data strategy at the Health Care Cost Institute, a group that aggregates claims data from several large American insurance companies and provided the U.S. data to the study.

The international survey focuses on prices paid by private insurance companies; in many countries, public health programs pay less, meaning the gap in prices for many countries may be even larger if it took account of every patient. The survey doesn’t have information from every country, nor detailed prices for every medical procedure. Drug prices do not include rebates. But the report’s overall message is clear. Prices in the United States are higher for nearly everything — by a lot.

Researchers at Harvard conducted an exhaustive study last year of things that make health systems in developed countries different from one another. They determined that the United States is distinct in a few ways. But the clear finding of those researchers was that it’s this huge gap in prices, more than any other single factor — not the number of doctors’ visits or hospitalizations, not the quality of medical services, not differences in social service spending — that helps explain why the United States is such an expensive place to be sick. (I wrote an article about that study, if you’re interested in the details.)

Over the last decade, most of the political health policy debate has been about how to ensure broader insurance coverage for the public. (Another way the United States is unusual is in having so many residents without any form of health insurance.) But the debate among candidates for the 2020 presidential race has begun to tack slightly toward policies that will address price as well.

The single-payer plans Senators Bernie Sanders and Elizabeth Warren have proposed would use a large government insurer to set prices for all medical services. Both campaigns assume substantial savings would result as that government system lowered prices across the board: for doctors, hospitals, medical devices and drugs.

Even plans considered more moderate, like those from Pete Buttigieg, the South Bend, Ind., mayor, and Michael Bloomberg, the media executive and former mayor of New York, would impose some controls on health care prices, by limiting the amount that doctors and hospitals could charge in the situations where they typically charge the most.

President Trump, too, has pushed forward with an initiative to lower prices: Through an executive order and regulation, his administration is seeking to require health care providers to publicize the prices they have negotiated with insurance companies. The idea is to promote more competition through transparency, though researchers are divided on whether the measure will work. (The administration has also worked with bipartisan legislators to eliminate surprise billing, which occurs most commonly in medical emergencies at hospitals, though that effort has stalled.)

Higher prices are not new for the United States, but they have become newly salient, as more health insurance comes with high deductibles and other forms of cost sharing that require patients to pay a larger part of the bill or even the full cost of their care. The overall upward creep of prices has also led insurance premiums to rise, taking a bite out of tax revenue, wages and corporate profits, too.

There’s also been some recent bipartisan interest in taking on drug prices specifically — though few policies have gotten very far in Congress.

Any successful effort to tamp down American prices, of course, will mean reducing someone’s paycheck. The uniquely high prices for drugs in the United States help make pharmaceutical companies profitable. The high prices paid for hospital care keep large research hospitals and small rural providers afloat. The high prices help doctors pay off extensive education debt — but also help place them among the highest-paid professions in our economy. None of those groups particularly want a pay cut.