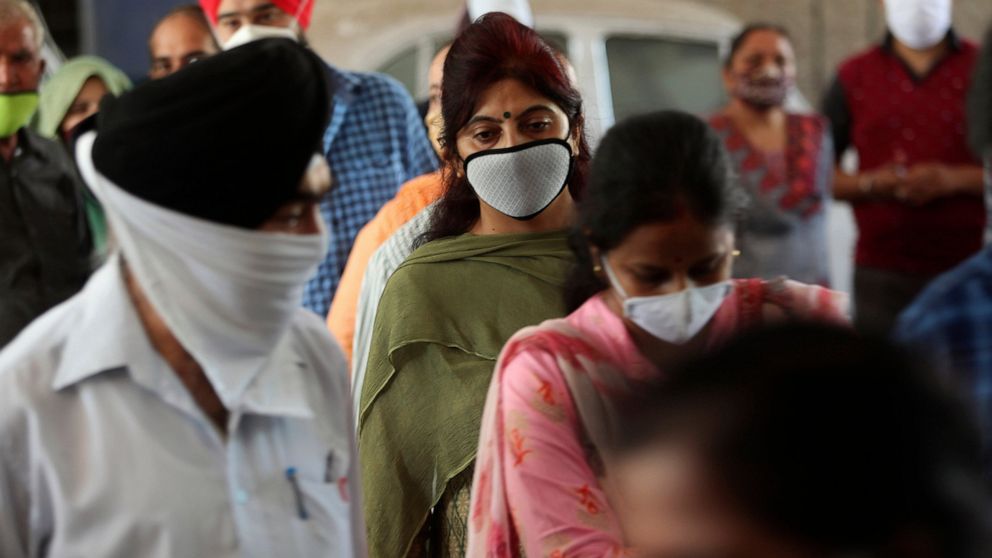 GENEVA — The head of emergencies at the World Health Organization says governments that provide “politically motivated” information about the coronavirus pandemic could face a political backlash.

Dr. Michael Ryan said Monday that “trying to present oversimplified, simplistic solutions for people is not a long-term strategy that wins.” He told reporters in Geneva that “transparency, consistency, honesty” and admitting errors can build trust.

Ryan was speaking in general terms after being asked about conflicting messages sent by the Brazilian government over its COVID-19 response.

Ryan says coronavirus-related messages sometimes come with “political overtones” and he alluded to a saying that trust takes years to build but seconds to lose.

He says: “If communities perceive that they’re getting information that is being politically manipulated or that it has been managed in a way that is distorting evidence, then unfortunately that comes back to roost.”

HERE’S WHAT YOU NEED TO KNOW ABOUT THE VIRUS OUTBREAK

— Scientists are still trying to determine whether coronavirus antibodies shield someone from getting infected again and medical experts warn tests that check for them cannot be safely used to return workers to the office.

HERE’S WHAT ELSE IS HAPPENING:

ROME — A doctor says the clinical condition of former Italian Premier Silvio Berlusconi is starting to improve after he was hospitalized with pneumonia and COVID-19 last week.

Dr. Alberto Zangrillo, Berlusconi’s long-time personal doctor, said in a statement Monday that the 83-year-old media mogul, who has a history of heart problems, has pneumonia in both lungs. Zangrillo says Berlusconi’s overall condition “appears to be improving” and that his body has mounted “a specific robust immune response” associated with a reduction in inflammation.

Zangrillo heads the intensive care unit at San Raffaele hospital in Milan, but he has stressed that Berlusconi isn’t in intensive care but in isolation elsewhere in the hospital.

Zangrillo said last week that Berlusconi’s advanced age and his history of medical problems make him particularly vulnerable to the dangers of coronavirus infection.

PARIS — Doctors have raised the alarm that nearly all the intensive care beds reserved for COVID-19 patients are in use in and around France’s second city of Marseille.

The Marseille Hospitals Medical Commission President Dominique Rossi told BFMTV on Monday that of the 70 designated intensive care beds in the Bouches-du-Rhone region, “between 65 and 67” are currently occupied.

New daily infections in France have averaged over 5,000 in recent days, raising fears of a second wave of the virus.

Rossi tweeted that the situation is tense, but that it isn’t as bad as at the height of the first wave, when the Bouches-du-Rhône department had up to 270 COVID-19 patients in intensive care.

Professor Lionel Velly, of the anesthesia-intensive care unit at Marseille’s La Timone hospital, says he fears there will soon be no more beds to accommodate the sick in Bouches-du-Rhône.

COPENHAGEN, Denmark — Danish Health Minister Magnus Heunicke says authorities have reduced the number of people who can gather in greater Copenhagen from 100 to 50.

Heunicke said Monday that the restriction is imposed with immediate effect in the Danish capital and its suburbs, and Odense, Denmark’s third largest city.

He says 230 new cases have been recorded since Sunday and that the number of infections is “the most worrying situation … since the spring.”

Overall, Denmark has reported 18,113 cases and 628 deaths. Most of the new cases were recorded in private homes and among young people.

TEL AVIV, Israel — Israeli demonstrators have placed more than 1,000 empty chairs in a central Tel Aviv square in an eerie display symbolizing the local lives claimed by the coronavirus.

A red rose was laid on each empty chair Monday with black and white signs representing those killed by the virus.

The surge in cases has raised concerns that the country could be forced to declare a nationwide lockdown during the upcoming holiday period, a time of widespread travel and large family gatherings.

On Sunday, Israeli Prime Minister Benjamin Netanyahu announced overnight curfews in some 40 cities and towns hit hard by the coronavirus. But he backed away from reported recommendations for full lockdowns after an uproar by politically powerful religious politicians.

AMSTERDAM — The coronavirus pandemic has proved to be the worst of times for an annual Dutch celebration of the works of 19th century British author Charles Dickens.

Organizers said Monday that this year’s edition of the Dickens Festival, which was to have been staged in December in the eastern town of Deventer, has been canceled.

Organizers say it would be impossible for visitors — and performers who dress up as Dickens characters during the two-day festival —- to observe social distancing guidelines in Deventer’s narrow streets.

The event draws more than 100,000 visitors to the town each year.

Doctors who treated 45-year-old Grzegorz Lipinski said Monday that the double transplant was the only way to save him after the virus almost totally his lungs.

Lipinski is head of the medical instruments sterilization room at a hospital in Tychy, southern Poland, that only treats COVID-19 patients. He was initially treated there then was moved to the University Hospital in Krakow, where he was put on the ExtraCorporeal Membrane Oxygenation, which is a system that performs the functions of the lungs.

He had the double transplant at the Silesia Center of Heart Diseases in Zabrze in July. Professor Marian Zembala, the center’s chief, says Lipinski is due to go home Tuesday.

ISLAMABAD — Education officials in Pakistan say authorities will start reopening schools from Sept. 15 amid a steady decline in coronavirus deaths and infections.

Schools were closed in March when the government enforced a nationwide lockdown to contain the spread of coronavirus. Authorities lifted curbs on most of the businesses in May, but schools remained closed across the country.

Officials said schools will reopen in Punjab and Sindh provinces from Sept. 15 and a formal announcement about opening of schools elsewhere was expected later Monday.

On Sunday, Pakistan reported three new deaths from COVID-19 in the past 24 hours, one of the lowest number of daily fatalities in more five months.

Pakistan has reported 298,903 infections and 6,345 deaths since the pandemic began.

BUDAPEST, Hungary — The Hungarian government says it has registered 576 new cases of the coronavirus, the country’s highest daily figure since the start of the pandemic.

Monday’s tally raises the total number of confirmed coronavirus cases to 8,963 since the pandemic began, with 625 deaths.

Hungary closed its borders to foreigners on Sept. 1 but has since announced a series of exceptions, including for citizens from the Czech Republic, Poland and Slovakia, as well as allowances for cultural and sporting events.

Hungary is scheduled to host the UEFA Super Cup final on Sept. 24 between Bayern Munchen and Sevilla at the Puskas Arena in Budapest.

Schools reopened across the country last week and pandemic-related measures in the education system, such as quarantines or switching to digital learning, are being handled on a case-by-case basis.

Under the agreement announced Monday, Britain’s University of Oxford in collaboration with AstraZeneca and Australia’s University of Queensland working with CSL will provide more than 84.8 million vaccine doses for Australia’s population of 26 million people, almost entirely manufactured in the Australian city of Melbourne, a government statement said.

Australians would have access to 3.8 million doses of the University of Oxford vaccine in January and February, it said.

Prime Minister Scott Morrison said both vaccines would need to be proven safe and effective and meet all necessary regulatory requirements before being made available to the public. Any vaccine would be free to all Australians.

SEOUL, South Korea —— South Korea has added 119 more cases of the coronavirus, its lowest daily jump in more than three weeks amid a downward trend in new cases.

The Korea Centers for Disease Control and Prevention said Monday the additional figures took the country’s total to 21,296 with 336 deaths.

It’s the fifth straight day the country’s daily jump has stayed under 200. The 119 additional cases are the lowest in kind since mid-August.

South Korea’s caseload had risen since early last month, with many associated with churches, restaurants and schools and an anti-government street rally in the greater Seoul area. In late August, South Korea’s daily jump once marked over 400.

But the caseload has gradually slowed down, largely thanks to toughened social distancing rules that restricts at dining at restaurants and bans gatherings at churches, night spots, after-school academics and fitness centers.

The state on Monday reported 41 news cases and nine deaths in the latest 24-hour period. That was the lowest infection tally since 37 were recorded on June 26 in the early days of the state’s second wave of infections.

The state on Sunday announced a slight easing of restrictions in Melbourne that began in early August, but the country’s second-largest city will remain in lockdown until at least Oct. 26.

The new infections bring the 14-day average in Victoria to 96 a day. Victorian Premier Danial Andrews said the average would have to be brought below 50 before restrictions can be relaxed.

“This is not about eradicating it,” Andrews said. “We will finish up with cases and outbreaks in 2021, but they’ll be of such low numbers that we can probably put the lid on those and not have to put restrictions back on,” Andrews said.