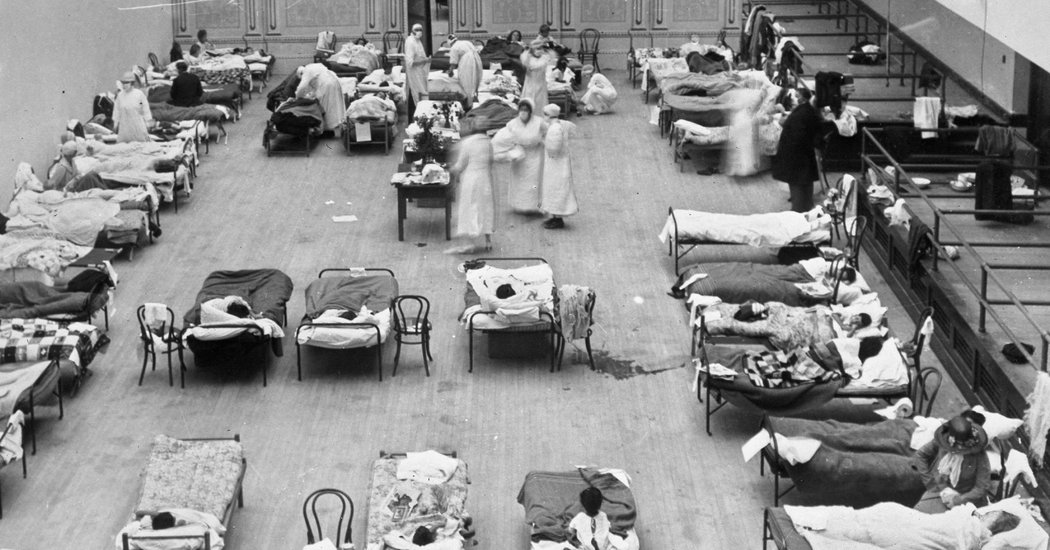 Flu season is coming and flu shot season is here. I teach in a journalism institute, and when I was doing my stint as director, welcoming the new graduate students in the fall, I always used to urge they get flu shots: You’ll be wandering all over the city, I would tell them, you’ll be interviewing people, you’ll be using communal keyboards — whatever else you do, get a flu shot.

And I work in a pediatric clinic, where at this time of year, we are attempting to give influenza vaccine to all our patients 6 months old and up, whatever the reason is that brought them into the clinic, from diaper rash to contraception.

Next month, November, is the centennial of the Armistice that ended World War I, and for years Nov. 11 was celebrated as Armistice Day, with a moment of silence at 11:11 (on 11/11) to remember the end of the long years of war and the many who had died.

This month is another centennial of death and destruction; the influenza epidemic was raging, killing around 195,000 Americans in October alone (for reference, about 116,500 American soldiers died in the whole war, with more than half of those deaths from disease, mostly influenza).

Many of the most haunting images of the 1918 influenza pandemic come from October 1918, when the disease was particularly severe in Philadelphia, with corpses piled up awaiting burial, and bodies buried in packing crates because there weren’t enough coffins. Many cities closed their movie theaters and prohibited public gatherings.

It is estimated that the pandemic killed 50 million to 100 million people worldwide.

“Ever since 1918, the descendants of that virus are still killing us,” Dr. Morens said. “Every year the flu that comes to our communities is a descendant of the 1918 virus, and it carries the history of being deadly.” People die from influenza every year, but “some flus are more deadly than other flus.” Last year was a bad year, he said, and about 80,000 Americans died. “It’s a big deal, and these deaths are mostly preventable.”

So as we mark the armistice centennial, and think about what we have and have not learned about wars and alliances and the fragility of international peace, for heaven’s sake, mark this other centennial with proper respect and attention by getting immunized against this year’s influenza, and making sure your children are protected.

The Centers for Disease Control and Prevention’s recommendation is to get vaccinated by the end of October, since it takes about two weeks for the protective antibodies to develop fully; give yourself — and your children — the best chance of being protected before serious influenza activity gets underway. This year, the nasal spray flu vaccine is back on the list as an option, for those ages 2 through 49 (though some special restrictions apply since this is a live virus vaccine).

The recommendation is for all children from 6 months on to get vaccinated, with special emphasis on the importance of protecting children under 5, and those with respiratory illnesses (including asthma) or other health problems. But the recommendation is also for all adults to get vaccinated, and anyone who acts as a caregiver to those most vulnerable to influenza (babies under 6 months, or ill or elderly people) has a special obligation. Pregnant women who get flu are also at higher risk of serious and even deadly illness, and should regard flu vaccine as a priority.

“When children go and get the vaccine, they actually end up protecting the more vulnerable people around them, particularly older folks,” said Michael Worobey, the head of the department of ecology and evolutionary biology at the University of Arizona, who works on the evolution of the 1918 influenza virus. “The beautiful thing is that even if the vaccine doesn’t work perfectly in an older person, if the people around that older person including grandkids are vaccinated, that has an impact.”

Influenza is a miserable disease even when it isn’t deadly. “Even though we know some people are at higher risk, we can’t predict who might have serious outcomes,” said Dr. Lisa Grohskopf, a medical officer in the epidemiology and prevention branch of the influenza division at the C.D.C. She said that while children with chronic medical conditions are at higher risk of getting sicker if they catch flu, “a substantial proportion of the kids who die every year don’t have underlying conditions.”

There were 183 pediatric deaths in 2017-18, she said, which was higher than in the previous few seasons. Already this year, at least one child has been reported to have died of flu.

There’s no good way to predict right now whether we’re looking at a particularly bad flu season this year. Last year’s season was classified as severe, Dr. Grohskopf said, and it went on for a long time. The C.D.C. reporting and surveillance for the new season has just gotten underway.

The influenza vaccine has to be reformulated every year, to protect against the viruses most likely to be active that season — some years the prediction and protection are better than others. However, immunization generally means a degree of protection against really severe illness. And in addition to protecting you against the two strains of influenza A, H1N1 AND H3N2, the flu shot is very effective at creating immunity against influenza B, Dr. Worobey said, which gets less publicity, but actually causes more deaths than H1N1.

Dr. Grohskopf said that immunization coverage tends to be better in younger children, and then starts to drop, so that it is lowest among young adults. Last season, 67.8 percent of children from 6 months to 4 years old were immunized, but only 47.4 percent of 13- to 17-year-olds. That’s a lot of children left exposed.

“A flu shot will not always prevent you from getting flu, but most will have a less severe course of flu than if they hadn’t had the shot,” Dr. Morens said. “It’s not perfect, but it’s the best thing we have.”

When he talks about the 1918 epidemic, Dr. Morens said, he speaks first and foremost of the terrible human tragedy. “People don’t appreciate the magnitude of what happened in 1918,” he said. “Everybody lost a family member or a friend. They were healthy one day and a few days later they were dead.”

He added: “In the modern era, we think it can’t happen, but we should be aware of it, we should remember it, and think of it as something that is out there waiting to happen.”

Getting a flu shot every year, he said, is one cheap and easy way to “increase the chance you will live a long, happy life.”